It's been a busy year for Kate Mosse, chair of the Women's Prize for Fiction, one of the biggest literature prizes in the world.

Not only has the international best-selling novelist finished her 23-year literary project the Languedoc Trilogy with the publishing of Citadel, but the author secured a new sponsor for the book prize she co-founded nearly 20 years ago.

In May 2012 the mobile services provider Orange withdrew its name and sponsorship from the Prize following a partnership spanning back to the competition's birth in 1996.

After 17 years of the Prize radiating a hue of orange - its logo adorning shortlisted and winning novels in bookshops, promising a quality read from the canon of female writing - Mosse was faced with the task of finding a new sponsor and partner.

Step forward Baileys - the creamy sweet alcohol beverage, marketed as a tipple enjoyed by men and women of refined taste. Next year the liquor will be placing its name firmly in the title: the Baileys Women's Prize for Fiction.

This year, HuffPost UK is delighted to be hosting the live streaming of the awards for the first time ever in a Google Hangout, bringing the announcement of the winner to a global audience.

Speaking to us on the morning of the sponsorship announcement, Mosse exudes relief and excitement over the future of the Prize.

Read our interview with the multi-million selling novelist about the importance of arts partnerships, the future of digital publishing and drinking Baileys:

What have the reactions been to Baileys being your new sponsor?

I'm a little taken aback by how happy everyone has been. I've had emails from South Africa, Australia, patrons, board members, lots of people saying it's one of their favourite drinks.

Baileys were such a natural fit - the brand is about celebration, celebrating women's achievements and having fun with it - that is how we've always run the Prize.

How long did it take to find another partner for the Prize?

I went on BBC Radio 4 in May 2012 to announce that Orange wouldn't be renewing the sponsorship and I had an immediate reaction. Over the course of the late summer and autumn we worked with some 25 companies.

Arts sponsorship works well when there are two different organisations coming together to achieve something. The parent company of Baileys has a really good history of partnership; Gordons Gin used to sponsor the Turner Prize and have supported a lot of British designers. They know how to make the best of an arts sponsorship.

Do you enjoy drinking Baileys?

I do love Baileys. The novelist Jenny Colgan and one of our anonymous donors have said 'Baileys is one of my secret passions.' There will be Baileys at the awards.

Has the publishing landscape changed for women since you co-founded the Orange Prize in 1996?

It wasn't that the landscape was male-dominated, it was more that there was an odd mismatch.

But in terms of Prizes, fewer than 10% of books that ever made it to leading Prize shortlists were by women, and in reviewing it was much worse. So it wasn't that books by women were not there, but those books were not appearing on shortlists. We founded the Prize in the spirit of a series of questions, such as "what is the value of prizes?'

Out of these questions, we thought that the best way to celebrate women's achievements and make it possible for women's work to be seen in the context of Prize-giving, would be to found our own Prize.

The figures and history now speaks for itself, when you see the leading bookselling chains like Waterstones saying that our Prize sells more books than any other. That's because the Prize came out of publishing, using every piece of advice from booksellers, librarians, publishers, journalists.

Did you imagine that the Prize would reach its 18th year?

My books are very long, I'm always asked as a novelist, especially by young writers, 'did you know that you'd write a book that long?'

But if you ever thought about writing a book that long you'd never start.

It's the same with the prize. The idea that it would have been here in 18 years time and visibly delivering in terms of sales, whilst celebrating women's creativity - we could not have possibly imagined that. We started out in a small room, a few people with an idea.

This year's Prize awards are this Wednesday night, how are you feeling?

As you can hear, I'm getting a bit overexcited. I've just come back from touring in South Africa, Australia and New Zealand and everyone was saying it's an amazing shortlist. We've had a skeleton staff this year, so it's been hard work. 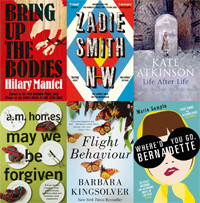 Of the six shortlisted books (left), do you have a secret favourite?

I have spent 18 years not having a favourite and I shall not change now. It really is an extraordinary year, the judging happens the night before. The decision happens right at the very end because it's important to us that these things are secret and that the authors are respected and they don't arrive at the party with lots of gossip. Over the years, the majority of decisions have been made by discussion and consensus. There is a voting system but it often isn't needed.

Are you excited that fans of the prize will be able to watch the awards ceremony on HuffPost UK, via Google Hangout, for the first time ever?

I'm really thrilled because the party is an invitation-only affair, but there will be lots of libraries holding their own parties and celebrating. To be able to do this with The Huffington Post, who are such an important coverer of the arts, who take loads of art stories out to the whole world, is a brilliant thing.

We are really grateful that this has been able to happen in association with HuffPost UK. It means that people who have read the books will be able to be part of it as it happens, it's a real landmark. I can't think of a better year for us to do it.

With the increasing role the digital format is playing in fiction, do you think we'll lose the printed word?

The fact that there is a growth in e-publishing is wonderful - different ways of telling stories.

But you can curl up with a printed book, whoever you are, wherever you are in the world, it's a personal thing. When I finish for the day, I don't want to see a screen, I want to have a different experience. Digital is simply taking stories out to a wide audience, it's just an addition to the printed word. 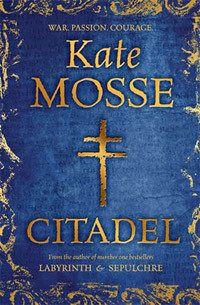 With the publishing of Citadel (right), you came to the end of the Languedoc Trilogy. Was it sad to put to bed such a significant piece of work in your career?

It was really sad. The real history of women in the resistance is very tough to research and very tough to write. When it had gone, I did have a bit of a weep and then I thought 'I can do whatever I want' - that was really exciting.

What are you currently working on?

I delivered a new book the day I got on the plane three weeks ago for my book tour for Citadel. It's a collection of short stories called The Mistletoe Bride and Other Winter Tales. The book has been like a palette cleanser after five years of the Citadel.

It was a joy to write something much smaller, each story is about a moment - a ghost seen in the distance, a jacket left hanging on a tombstone. They are stories inspired by British and French folklore, traditional ghost-telling stories. I've always enjoyed what the great Edith Wharton called "the thrill of the shudder".

Do you have any advice for combating writer's block?

When writing I have two artists at the back of my mind.

And Picasso's wonderfully inspiring comment at the end of his life. He was the world's greatest acknowledged living painter, he was asked by a young artist why he still went to his studio everyday - he said "when inspiration arrives I want it to find me working."

So I just keep writing, I never stop. It doesn't matter if it's rubbish, if you screw up the digital paper and throw it in the bin - tomorrow will be easier.

The winner of the Women's Prize for Fiction was A.M Homes with her novel May We Be Forgiven - read more here.