Commuters at a London Tube station were left stunned today when the Duke and Duchess of Cambridge made a surprise appearance to boost poppy sellers.

Some 2,000 uniformed personnel, veterans and their supporters are hitting the capital's streets today for the Royal British Legion (RBL) appeal ahead of Remembrance Sunday.

TOP STORIES OF THE DAY

William and Kate were swamped by members of the public taking photographs as they walked along the high street to the station's entrance hall.

Earlier, they welcomed RBL supporters and members of the armed forces to Kensington Palace before boarding the classic bus.

William, who left his post as an RAF search and rescue helicopter pilot in September, and Kate were greeted at the station by motorcyclists from the RBL's Riders Branch.

As they approached the station's entrance, they were introduced to a line-up of Poppy Day supporters including volunteers and military personnel.

Kate, wearing a red LK Bennett coat, spoke with Corporal Steve Johnson, an RAF recruitment officer from Newcastle, who is busking at Tube stations across London to raise funds for the appeal.

"Kate asked what kind of music I'd been playing," he said. "She asked me to play but then said don't because it's too busy.

"Kate was more interested in the music, while William was more concerned with the day itself and how the appeal was going.

"Lots of people are ecstatic to see them."

Sisters Lisa and Sina Durchstecher, from Germany, were walking past the station when the royal couple emerged.

"I couldn't say anything when I saw them."

William and Kate had earlier boarded the bus at Kensington Palace with dozens of RBL supporters including actress Barbara Windsor and newsreader Alastair Stewart.

William told the former EastEnders star his son George had been "behaving himself this morning" as they met in the palace grounds. 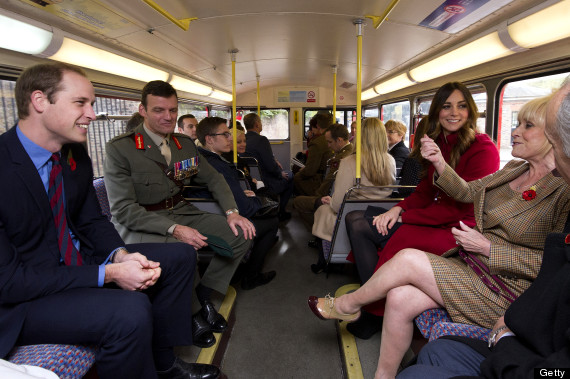 Bernie Ecclestone: Who Is The Businessman Offering To 'Take A Bullet' For Putin?