The question is simple enough. "Should Scotland be an independent country?" But when will we actually know how the Scottish have voted? Polling stations for the referendum open across the country at 7am on Thursday 18 September and close at 10pm.

Unlike UK general elections, and just to keep things exciting, there will be no exit poll. The ballots will be counted overnight and the final result is due around 7am on Friday morning. In theory.

WHEN WILL WE KNOW THE RESULT?

Ballots will be counted at 32 local areas and then verified at the Royal Highland Centre at Ingliston, in Edinburgh. Results from across Scotland are due to start trickling in from around 2am. The smaller population centres are expected to declare first. The results from Aberdeen, Glasgow and Edinburgh expected last, between 5am and 6am. This interactive map provides a useful guide. A table of the timings is below.

Once one side has secured an overall mathematical victory the chief counting officer will get on the stage at Ingliston and announce the final result. It takes just one vote to swing it either way and the combined national result is expected at 7am. The predicted timing of the referendum result is based on the experience of the declaration of Scottish seats at the 2010 UK election in Scotland, which was at 6.30am and the 2011 Scottish parliamentary election, which was declared at 7.30am.

WHAT COULD DELAY THE RESULT?

The Electoral Management Board for Scotland has identified several reasons why the count could be delayed. One worry is the effect of the weather, especially where boxes are being transported over long distances by road or where there is a reliance on boats or aircraft.

A stunning 97% of the electorate has registered to vote in the referendum, meaning turnout is expected to be very high, which could also delay the vote. There will be a lot of ballots to count. Turnout in Scotland at the 2010 general election was 64%.

Scotland's Biggest Ever Day - Greeted With 'Worst Ever' Front Page...

Is This The Flag The UK Could Wake Up To Tomorrow?

The board has also warned that an unfortunate "major emergency" could also of course delay the count. Fire, terrorism or "other major incidents" are cited as varying concerns.

Another factor that could keep us all waiting are recounts. A recount of the final result is not allowed, even if one side wins by just a single vote. But recounts are allowed at the local level, although only if there are concerns about the process, not the result of the counts. 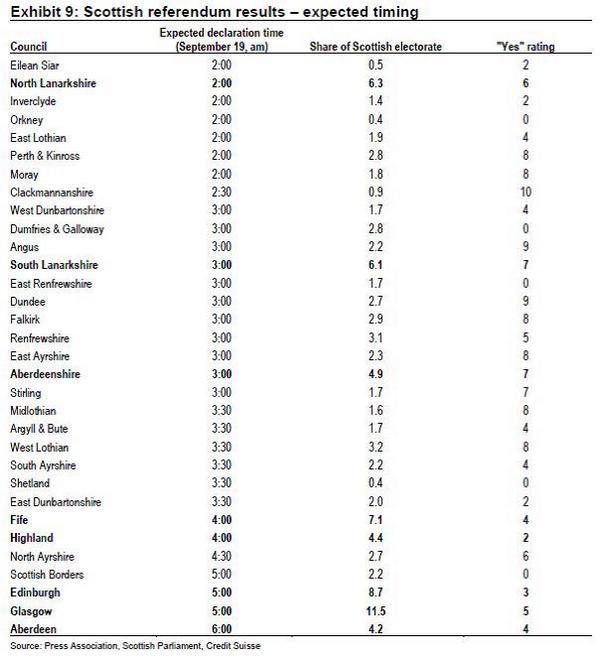 Final Poll Says No Ahead... But Only Just

Scotland's Biggest Ever Day - Greeted With 'Worst Ever' Front Page...

'My Wife Doesn't Want Sex, Can I Seek It Elsewhere?'

Should We Nationalise Railway Or Energy Companies?

'National Emergency': Two-Thirds Of UK Households Could Be In Fuel Poverty This Winter

Tories Losing People's Trust To Labour When It Comes To Cost Of Living Crisis, Poll Finds

Gap Between Poor Pupils And Their Peers Sees No Change In 20 Years, Report Finds

As Energy Prices Are Set To Soar To £4,000, What Are Politicians Proposing To Do About It?

Boris Johnson Not Working Day-To-Day While On Holiday, Says No.10

Boris Johnson Is Still Working Despite going On Another Holiday, MP Insists

Analysis: Boris Johnson's Government Has Given Up On The Cost Of Living Crisis