Japan has won the RoboCup robot soccer world championship at an event in China.

Every year over 40 countries send teams to the RoboCup, the world's annual robotic soccer championship where various types of automated robots battle it out in categories for the coveted world cup.

As you can see from this 2015 match, robot football sadly isn't the most glamorous of sports, nor is it the quickest - robots need to independently find the ball, move towards it and then communicate with its team members.

Nor is it the most graceful, robots fall over, a lot. What it does do however is show the progress that robots have made since the year before - highlighting the advances that universities have made in the arena of artificial intelligence, motorised limbs and more. 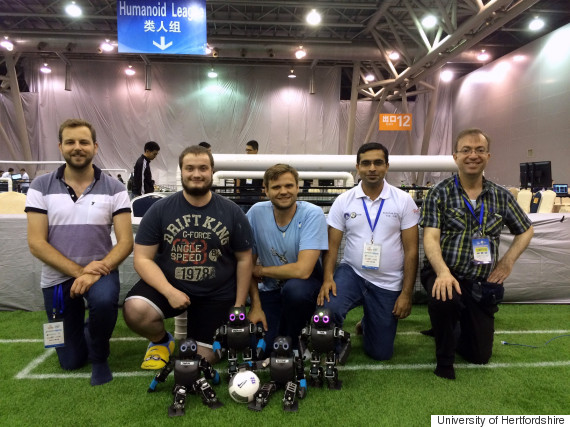 Representing the British corner were Bold Hearts, a team of robotics experts from the University of Hertfordshire. Sadly they were beaten in the second round 2-0 by a dominant French side.

Coming up tops however was the University of Chiba's The Brains Kids who defeated rivals ZJUDancer who hailed from China's Zhejian University.

There are three major divisions which split the humanoid league with robots being classified on their size.