Chrissy Teigen got into a very meaty discussion with some of her vegan and vegetarian followers this week after the model tweeted about her bacon preferences.

Some of her fans apparently didn’t realize she eats meat, although the 32-year-old regularly posts photos of her meals ― and basically dedicated her “Cravings” cookbook to pork.

This bacon tweet on Tuesday sure greased out some of those non-meat eating followers: 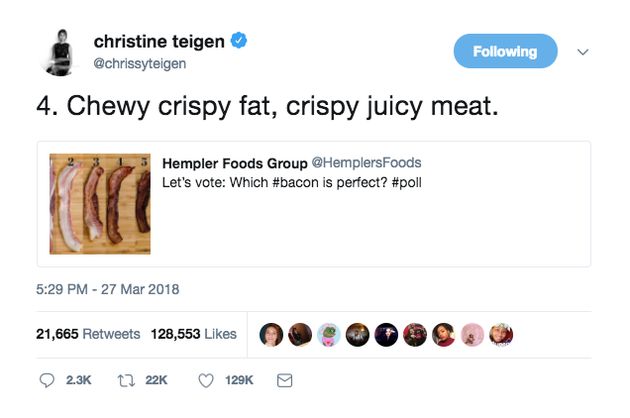 Some Twitter users wondered why Teigen ate meat at all.

“They’re better alive,” one user said. “Why can’t they be a breed of dog so ppl would care?”

To be fair, that user basically set up Teigen’s reply:

I disagree. I do not like eating them alive.

Things got even more interesting when a YouTuber named Kalel joined the discussion.

“If you had to watch their faces as they were about to be slaughtered you might gain a fresh perspective. These little babies deserve to be more than bacon,” she said.

If you had to watch their faces as they were about to be slaughtered you might gain a fresh perspective. These little babies deserve to be more than bacon ☹️ pic.twitter.com/EbYL6KE4la

When another person tweeted that the pigs also deserved to be ham, pork chops and ribs, Kalel went off.

Wow. Can’t imagine what it must feel like to think that you’re SO important that others exist/die just for YOU! Respecting all life is a far more rewarding way to live.

And the situation just grew more heated when Teigen answered:

I can’t imagine thinking I’m a god because I don’t eat meat while simultaneously being a judgemental brat to strangers online.

Judgement is a natural reaction when someone takes part in the mistreatment and murder of another. Would you judge someone if they killed and ate your dog?

Teigen called some of the people in her mentions “entitled” and then pointed out that her husband ate wings off her body for her cookbook:

I always think that one day, I will probably give being a vegetarian a try. The thing that would stop me? I *never* want to feel as entitled and judgmental as the ones losing their minds in my mentions.

It appears she also blocked Kalel, according to one of Kalel’s tweets about the exchange:

I’ll never quit trying to defend my animal friends and pushing for a cruelty-free future. But clearly @chrissyteigen didn’t like that I rattled her moral compass a bit. pic.twitter.com/OLiZCXb870

I typically pride myself on my ability to keep my cool and NOT be a “preachy vegan”. I strive to inspire others by example, not by judgement. However, I have my moments where I just grow tired of being soft and understanding about it all. It’s truly a daily struggle.

The debate will likely continue once Teigen’s next cookbook comes out.

Sheila Hancock Reflects On Being Dropped By Celebrity Gogglebox: 'I Suppose I Was Too Rude'

3 Easy Ways To Make The Most Perfect, Foolproof Salmon