"Great things are done by a series of small things brought together". So said the most influential Post-Impressionist painter, Vincent Van Gogh.

A week ahead of World Malaria Day, there is much that rings true in his words, for in the fight against the world's biggest killer disease, many small things (backed by some big commitment) have led to extraordinary progress. Efforts - big and small - have delivered unprecedented progress in the battle against malaria - one of the world's oldest diseases, slashing child deaths by half in the last ten years and saving some 4.3 million lives between 2001-2013.

Many of the tools that have led to the progress in fighting this big disease are small, simple and cheap. Take a mosquito bed net that, when folded ready for distribution, is the size of an old vinyl album cover; yet it protects a mother and her child from mosquito bites. Or consider a rapid diagnostic test - a simple dipstick test the size of a pen - that accurately diagnoses malaria with results in 15-20 minutes, meaning the appropriate treatment can be delivered quickly and effectively. These small but mighty tools in our arsenal of weapons to fight the biggest single killer disease of children have made a staggering difference and every day are helping save 1,700 lives. 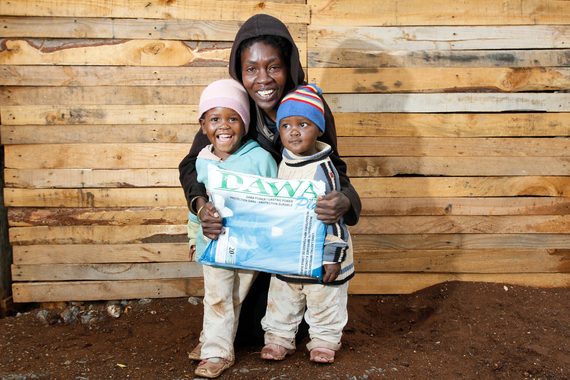 Obviously small things can also wreak huge damage. None more so than with malaria. The culprits behind this disease that causes the death of a child every minute - don't at first look particularly ferocious or terrifying. In fact, you need a microscope to even see them. But tiny malaria parasites, transmitted through the bites of infected mosquitoes, are thought to have killed half the number of people that have ever lived.

Inspiringly, with massive global efforts, involving the UK public, government, businesses and scientists, we have arrived at a potential tipping point in the history of this disease with real potential to get the job done - stopping people needlessly dying from malaria. However, as ever, with great opportunities they come hand in hand with risk. We are only half way there in the fight against malaria, and we only have half the financial resources needed. If support wanes in the coming years there is a real risk that hard-won progress could be stalled or even reversed. There is historical precedent when the 1970's malaria campaign was halted before the job was complete and the disease bounced back fast and hard. Even a small derailing of our efforts will have tremendous ramifications - on lives and economies. We cannot let this happen when we have the opportunity to change the course of history and be part of a massive humanitarian victory.

Which is why this World Malaria Day we're spreading the word that it's #AllToPlayFor as we seek to make malaria no more. We cannot afford to stand still or let any ground slip when the stakes are so high, and many of the solutions available. When it costs less than £1 to treat and save a child's life, no one should die from a mosquito bite.

You can play your part by buying the Malaria No More UK Jack Wills bracelet because it's #AllToPlayFor.