Some 18 months ago, Royal Ramblings sat down with wrestling icon Al Snow. It was one of the most interesting, in-depth and educational wrestling-related experiences we have had. Soaking up Snow's forensic knowledge of the business was not only a pleasure but a privilege. Thankfully, for a new generation of British wrestlers, that experience is one that will not be limited to the Royal Ramblings team.

Launched last month, The Al Snow Wrestling Academy is due to open in a secret location in New Malden, South-West London in the first quarter of 2016. Beginners, Intermediate and Advanced level pupils - male or female -will have the opportunity to sit exams this month for entrance to the school. However, the admission tests are said to be rigorous and according to Snow's business partner and school trainer Simon Van Der Wolf, the school is "not going to be easy" to get in to. Given there are already said to be 100 applications, this might be an understatement.

Given the selective nature of the school, it is only right that the calibre of the trainers be high and there are some very serious names on the list.

There are few UK independent promotions that Jonny Storm has not worked for and his is one of the most well-respected names in the UK. He is a joy to watch in the ring and top US trainers have been known to recommend their pupils watch some of Storm's matches with his long-time friend and tag-partner Jody Fleisch. Having worked in the States and Japan, Storm has some twenty years' experience to draw on.

Another man whom will need no introduction to a UK audience is Doug Williams. With 25 years industry experience, a tremendous international reputation and plenty of training experience under his belt Williams is a top pick for the academy. Many wrestling fans will know Williams from TNA of course but he worked extensively with Ring of Honor has toured with Pro Wrestling Noah and all across Europe and even has a British Judo championship to his name!

Speaking of Europe, the school will certainly be of interest to continental wrestling hopefuls. One of the teacher's that has been announced is the uber-talented Bad Bones (read our interview with him here), another man with years of industry experience. Whilst he wrestles in Germany for top promotion wXw, Bad Bones is a regular on these shores and particular in Kent with IPW where he was the heavyweight champion. Another TNA alumnus, Bad Bones has a fantastic reputation both backstage and in the ring. 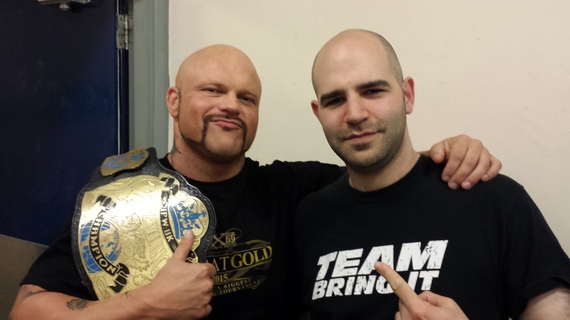 Above: RR's Danny with a champion trainer - Bad Bones

Another trainer of serious repute is Joe E. Legend. The WWE alumnus with more than 20 years of in-ring experience started out in Canada as Edge's tag-team partner and as part of a stable with Rhyno and Christian! He's worked for WWE and TNA. He's worked in Russia, South Africa, Japan and across Europe. Amongst those he has already trained is the ubiquitous Alex Shelley. Legend by name and by reputation, this man is a top talent from which to learn.

The man delivering training on amongst other subjects, in-ring psychology, will be legendary British and international wrestling referee Steve Lynskey (read our interview with him here). As we set out in the article, Steve has had experience with some of the top companies in the world. He is a booker and promoter, an agent, referee and he himself trained as a wrestler. There is little he cannot do and essentially no-one in the industry that he does not know. The school are lucky to have him.

Meanwhile, the aforementioned Simon Van Der Wolf is no stranger to the industry himself being as he is, a 15-year Pro-Wrestling veteran and entrepreneur working with the film and TV industry. A quick look at the endorsement videos from well-known wrestling faces on the school Facebook page leave one in no doubt that the networks and access that Van Der Wolf and Snow have between them, as one might expect, are extensive.

Of course, the school is named after the MVP and that is Al Snow himself. A doyen of WWE's Tough Enough and TNA's British Boot Camp, Snow is one of the most respected names in the business. He has established a good name in acting too, with more than 20 titles to his name and counting. It will therefore be little surprise that only the best at the academy will be getting personally schooled by the Head-master himself.

Prospective pupils can find out more information on the Facebook page here.

Good luck with your applications! 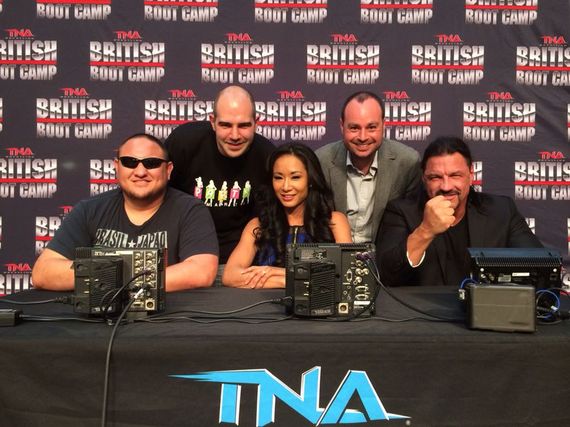 Above: Al Snow with colleagues Samoa Joe and Gail Kim before he taught the RR team a thing or two!