Louisiana mom Holly Wagner's world was turned upside down when she lost her 11-month-old son Cameron after a car accident. Her pain intensified upon finding out that her baby boy had been improperly fastened in his car seat. If that mistake had been corrected, he would have survived, she told The Huffington Post in an email. To spare other parents the loss she experienced, Holly has now dedicated her life to sharing her story and educating others about car seat safety.

On April 27, 2013, Holly was at work while Rhett, her boyfriend at the time, was watching Cameron and her 3-year-old son Connor, she said. After taking the boys to visit with family and flying a kite with them at the park, Rhett ran a stop sign and collided with another car, on the way home.

Rhett survived with a brain and leg injury, Connor had a broken arm, but the damage to Cameron's body was far more severe. The crime scene investigator told Mom that Cameron was not buckled properly. "Only the chest clip was fastened. Upon impact the chest clip broke causing Cameron to come out his seat and be ejected from the car," she explained. "[The investigator] told me that if Cameron would have been rear-facing and buckled properly that he would still be here today." 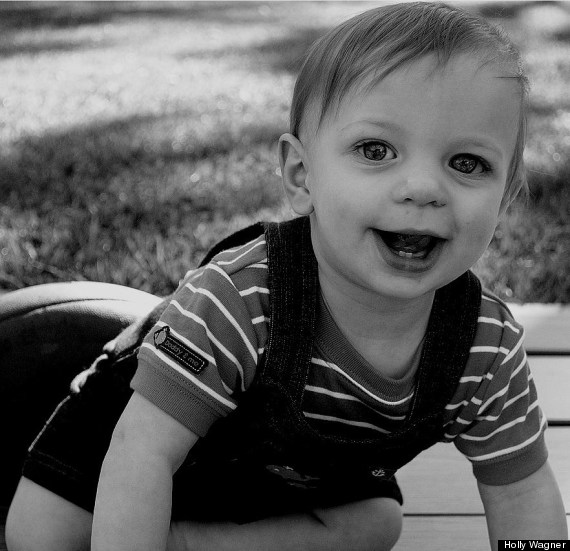 Having suffered a severe head injury, broken ribs, and a punctured lung and spleen, Cameron underwent several back-to-back surgeries at Our Lady of the Lake Hospital in Baton Rouge. But, after a few days with Cameron in the PICU, Holly received devastating news -- due to the severity of her son's brain injury, his body was not absorbing any nutrients. She was given two choices: "Let him starve himself to death or take him off life support and bypass that pain and misery."

"I knew what needed to be done but I couldn't bring myself to allow it," Holly said. "It wasn't until they let me hold Cam one day and I had felt his spine and hips and tailbone through his clothes that I realized I was being selfish. I couldn't let my son starve to death just so I can have a few more days with him. That was no way to go. He didn't deserve to suffer anymore." 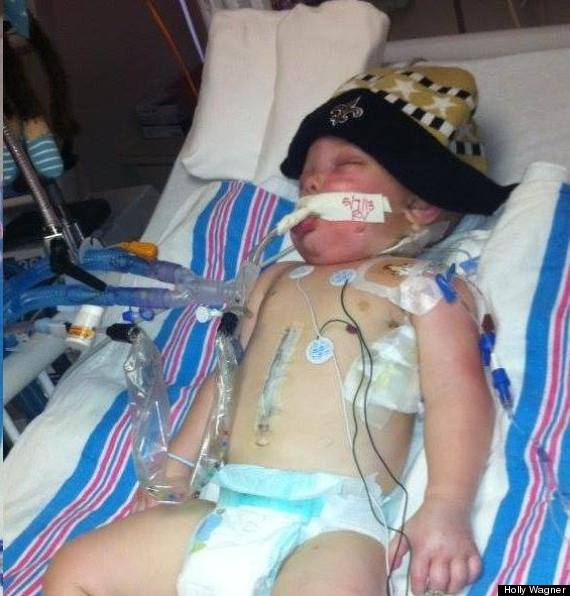 According to child passenger safety program Buckle Up For Life, 75 percent of car seats in this country are not installed correctly, and Holly wishes more people would speak up when they see errors.

Just weeks before the fatal car accident, she posted this photo of Cameron in his car seat on Facebook. In a blog post about car seat safety, she explains the problems she now sees in the photo; he is forward-facing and the straps are twisted.

"No one said anything," Holly told Redbook. "I wish someone had corrected me and told me he wasn't restrained properly," she said.

While Holly understands that people don't always like to receive unsolicited advice, she urges others not to pass up the opportunity to try to help someone. And, she wants moms and dads to really listen when they are given car seat advice. "I am a mother just like every other mother out there," Holly said. "We are not perfect but we all try out best to keep our children safe. If we work together and help one another we could learn so much from each other."

She especially hopes her story inspires parents to get a car seat check.

"If I could go back and change anything it would the lack of research I did on car seats. I would go to cert.safekids.org and find a tech local to me that could help install my seats and teach me how to use them the correct them. Before the accident I always made sure to strap the car seat down to the seat and always always would buckle them all the way but I didn't know all the little things ... like how you're not supposed to use after market products and how much safer rear facing is then forward facing."

"Parents and caregivers need to have the right seat for their child’s age and size and they need to install it correctly according to manufacturer instructions," Del Castillo said in an interview. "Many websites offer resources and guidelines on car seat installation, such as BuckleUpforLife.org and safercar.gov. Many sites also can help you locate a Child Passenger Safety Technician (CPST) in your community, who can help ensure your seat is installed correctly."

Her specific car safety tips for parents and caregivers include:

Like Holly, Del Castillo encourages parents to raise awareness of the issue of child passenger safety with the people closest to them. "Make sure they understand the importance of getting this right," she said. "We know that car seats and booster seats are not always as simple as they may seem. In fact, many people are shocked to learn that three out of four car seats in this country are not installed correctly. That’s why raising awareness of this issue is so important. "

As for Holly, she has signed up for classes to get certified as a Child Passenger Safety Technician (CPST), and with the help of a new friend, she has also launched "Cameron's Story Is Saving Lives" -- a Facebook page full of car seat advice and tips to help other parents learn "the ins and outs" of child passenger safety.

Read More On HuffPost Parents
Helicopter Parents Are Everywhere, Except Where They're Needed Most
The One Mistake Most New Parents Make Before Even Leaving The Hospital
Police Officer Pulls Young Mom Over To Give Her A Ticket, Buys Her A Car Seat Instead

Boris Johnson Says Question Of His Leadership Is 'Settled'

'See It. Say It. Sorted.' Is Staying Despite Promise To Banish Tannoy Spam