Armed with little more than a bulky film camera and a curious heart, photographer Jimmy Nelson has been traveling to the far reaches of the Earth in search of what he sees as the last bastions of human purity and authenticity: the world's lingering, dying tribes.

As part of his stunning photo project "Before They Pass Away," Nelson has spent the last four years traversing brutal ice fields, thick jungles, daunting mountains and vast deserts to visit and capture the beauty and wonder of some of the globe's most endangered cultures -- tribes who call the remotest corners of Africa, Asia, South America and Siberia home.

"Out of all our cultures and tribes, these are the last of the last," the 46-year-old Briton told The Huffington Post during a recent interview in a Manhattan coffee shop. 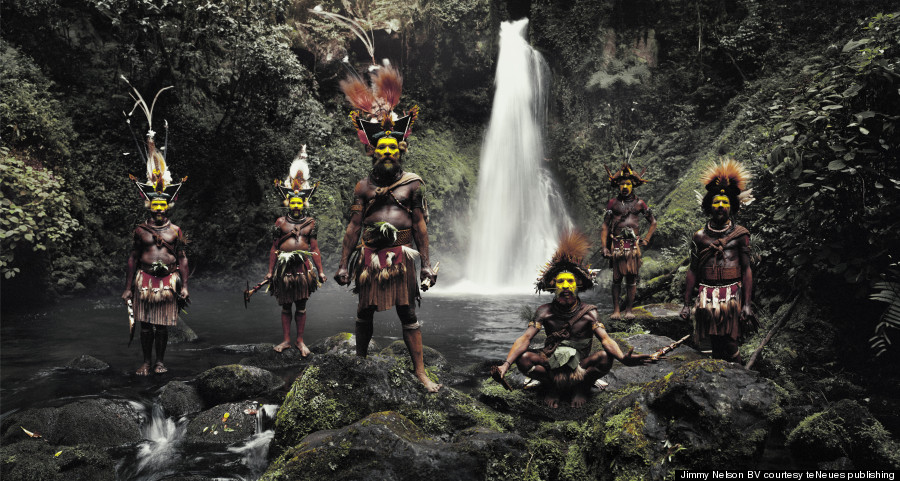 The Huli warriors in Papua New Guinea. According to Nelson, the Huli tribe has shrunk by 90 percent in the last few decades, largely due to a mass migration to towns and cities. (Credit: Jimmy Nelson/ teNeues Publishing)

As rapid globalization and digitization heralds the end of many of these tribes and their traditional ways of life, Nelson said he felt compelled to document the final gasps of these remote cultures.

"In the very near future, they will all have smartphones," he explained. "The world is quickly becoming homogenous, and this change is happening at breakneck speed."

"In all this homogeneity, people no longer think that their ethnicity and authenticity is valuable. They think what's valuable is what they see here," he said, gesturing to the many indistinguishable laptops that sat on almost every table in the crowded cafe before pointing to his heart, "and not in here." 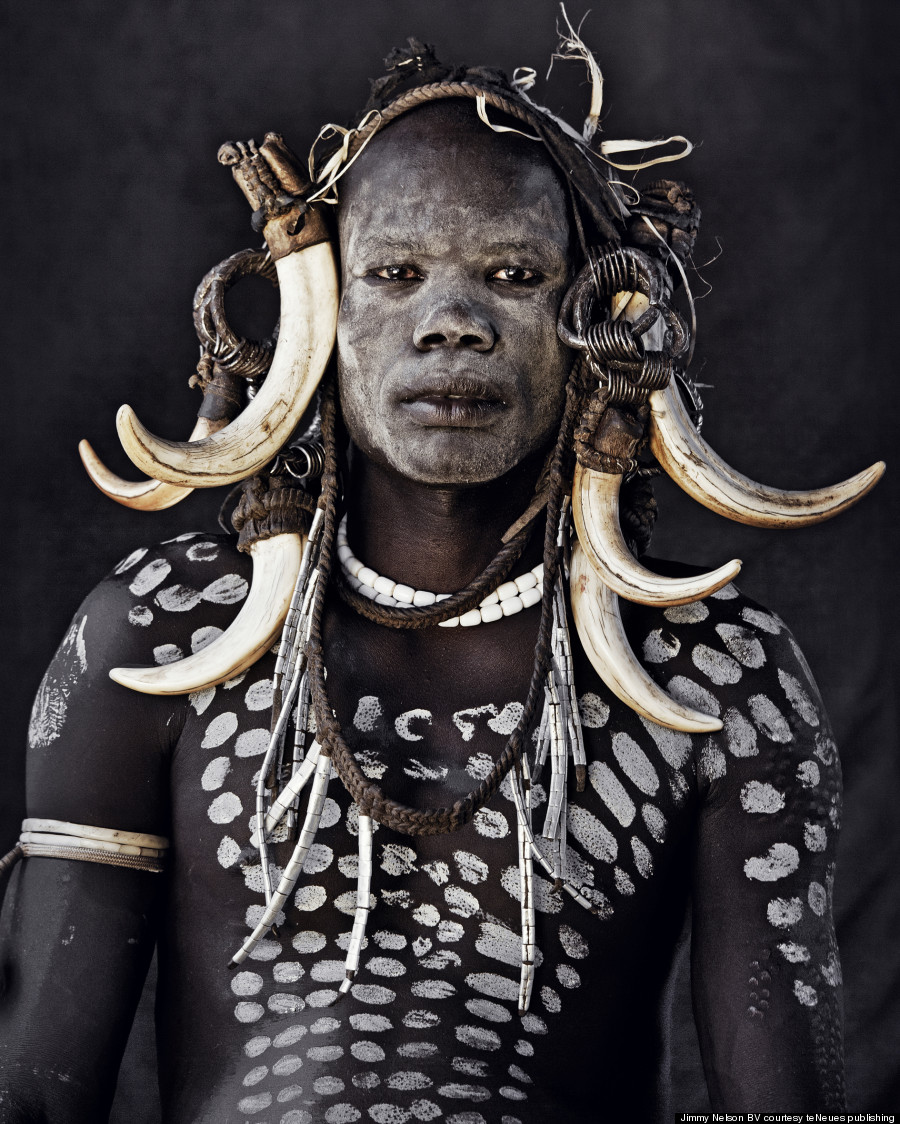 Explaining the motivations behind his "Before They Pass Away" project, Nelson wrote on his website:

"I wanted to witness [the tribes'] time-honored traditions, join in their rituals and discover how the rest of the world is threatening to change their way of life forever. Most importantly, I wanted to create an ambitious aesthetic photographic document that would stand the test of time. A body of work that would be an irreplaceable ethnographic record of a fast disappearing world." 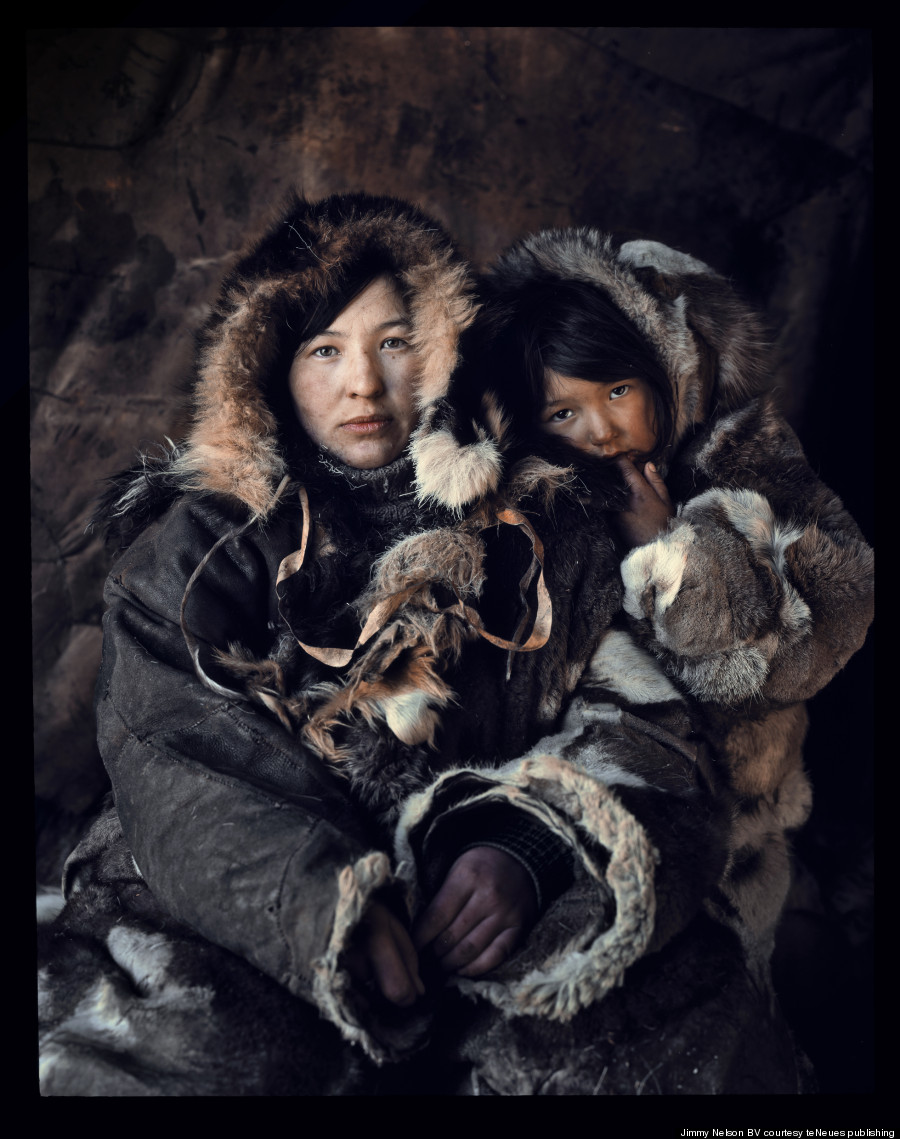 A woman and child of the Arctic Chukchi tribe of Siberia. The Chukchi live on the peninsula of the Chukotka in the Russian Far East. "Unlike other native groups of Siberia, they have never been conquered by Russian troops," according to Nelson's website.

Nelson's epic journey began in 2010 -- and the road was anything but smooth. For one thing, Nelson said that just locating the tribes was often difficult.

Take the Arctic Chukchi, who live in the harsh Siberian wilderness. According to Nelson, there are only 60 Chukchi tribespeople living their traditional existence -- and they live, without access to modern communication, scattered over an area the size of France. For a month in 2012, Nelson, with the help of a guide, followed the deer droppings left behind by the tribe's animals through the freezing tundra before he finally made contact with them.

"We are so used to having everything planned, finite, on a deadline. But for this project, you can't do that. You have to think out of the box, you have to give in, you have to trust. You have to learn to let go," he said of the experience, which he described as "profound." 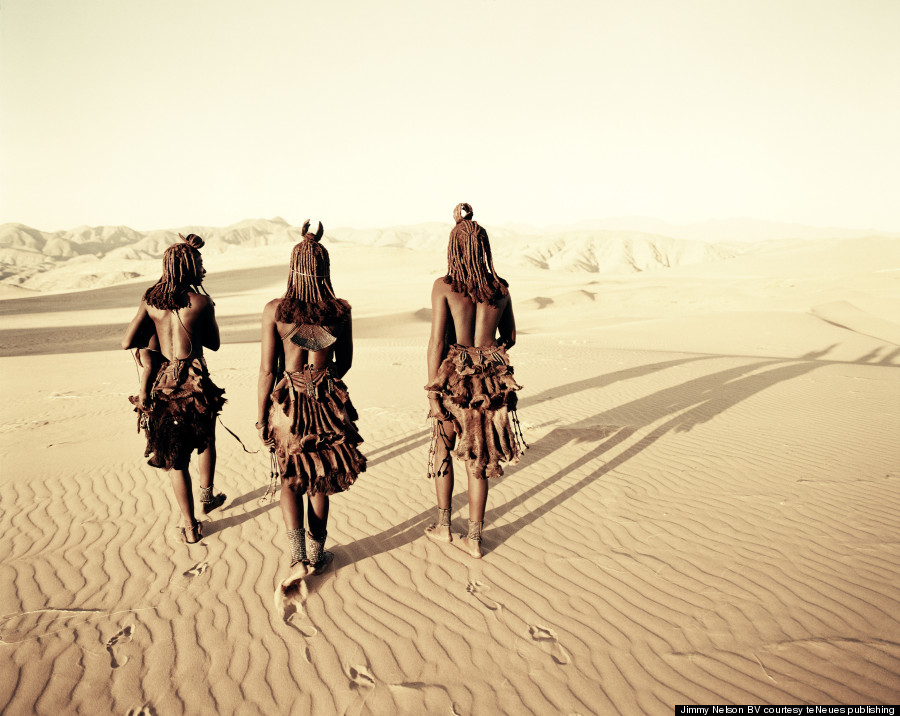 Members of Namibia's Himba tribe. The Himba are "an ancient tribe of tall, slender and statuesque herders," according to Nelson's website. "Since the 16th century they have lived in scattered settlements, leading a life that has remained unchanged, surviving war and droughts...in one of the most extreme environments on earth."

The photographs themselves were also not always easy to capture. The tribespeople sometimes spoke obscure dialects, so even with a local translator, Nelson had to rely on body language to communicate and build trust. Some pictures took days to capture due to weather and harsh conditions. 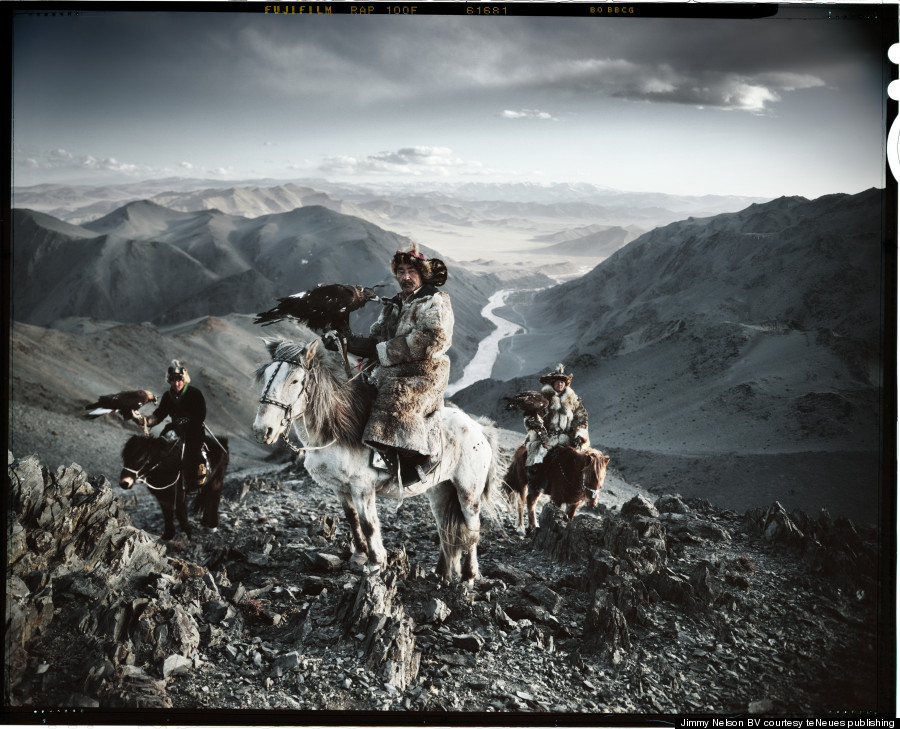 Kazakh tribespeople. Descendants of Turkic, Mongolic and Indo-Iranian tribes, as well as the Huns, the Kazakhs are a "semi-nomadic people that have roamed the mountains and valleys of western Mongolia with their herds since the 19th century," per Nelson's website.

Nelson's 4x5 film camera (you lose "intimacy" with digital photography, he explained) also sometimes proved to be a challenge.

"By using this decrepit old machine, one forces oneself in a very physically demanding way to communicate with the people," he said about the camera he built from 50-year-old vintage parts. "In turn, the people see that I'm using it, see that I'm very awkward, that my fingers are freezing, they see that I'm crying because I can't focus, that I'm physically exerted." 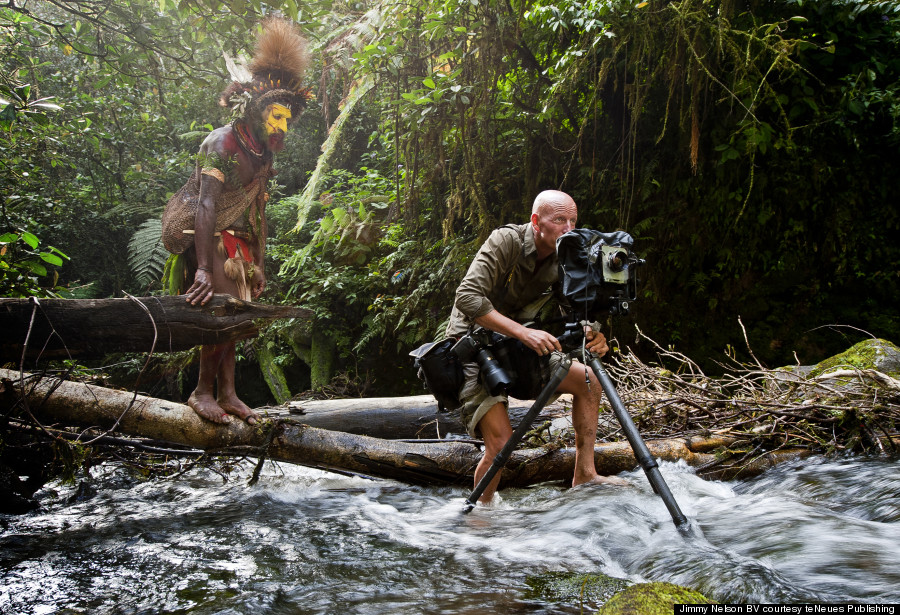 Ultimately, Nelson, who lives in Amsterdam with his wife and teenage children, says he hopes his photographs will serve as a reminder as to what humanity is losing with the advent of hyper-modernity. 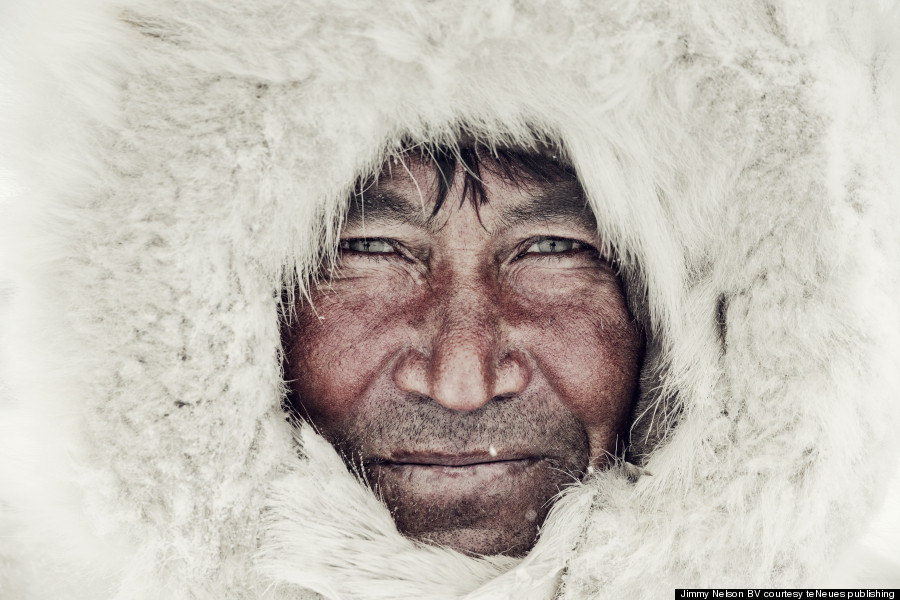 A Nenet tribesman. The Nenets are reindeer herders who live in the Yamal peninsula of northwest Siberia. The Nenets have thrived in Siberia for more than a millennium, living in temperatures that range from minus 50 degrees Celcius in winter to 35 degrees Celcius in summer, per Nelson's website. Every year, the Nenets undertake a migration of over a 1,000 km, a distance that includes a 48 km crossing of the frozen Ob River.

Those in the developed world also have lessons to impart, Nelson says.

"We have to teach them that what they have is very valuable, and as they enter the developing world, as they're going to do, we should teach them not to abandon [their culture and knowledge], but to apply it to the world around them," he said. 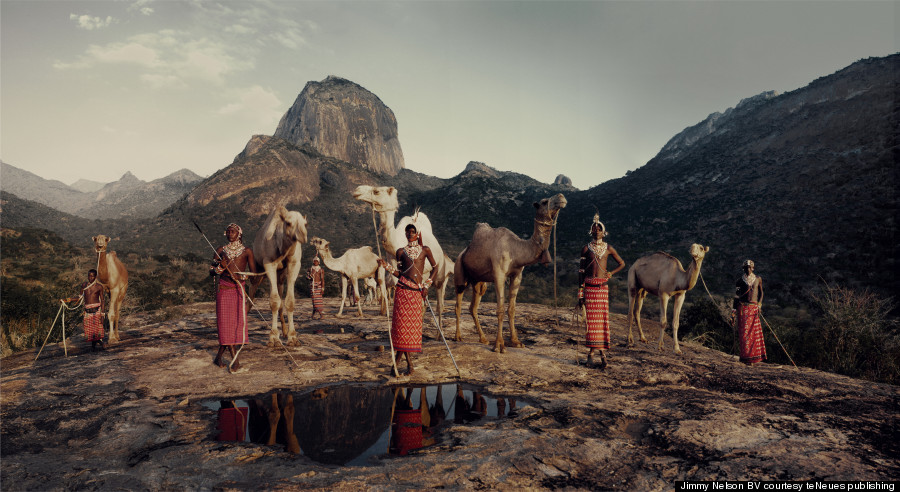 Samburu tribespeople. The Samburu tribe lives in northern Kenya. Nelson told HuffPost that Samburu men are so powerful and at one with nature that they've been known to use their bare hands to kill lions that attack their camels.

Even as the long fingers of the Internet threaten to touch every corner of the globe and as paved roads begin to criss-cross over even the most faraway regions, Nelson says he hasn't lost hope that the tribes and their traditions will continue to survive in some way or form.

"I always keep optimistic," he said. "I hope that through me and others who do what we do, there will be some sense of consolidation, that we won't lose it all. I haven't given up, and I won't stop, so long as I'm healthy enough to travel and carry a camera. [These tribes are] too spectacular and too special to give up on."

Thus far, Nelson has visited and photographed 35 tribes across the globe. He says he's planning to visit 35 more. 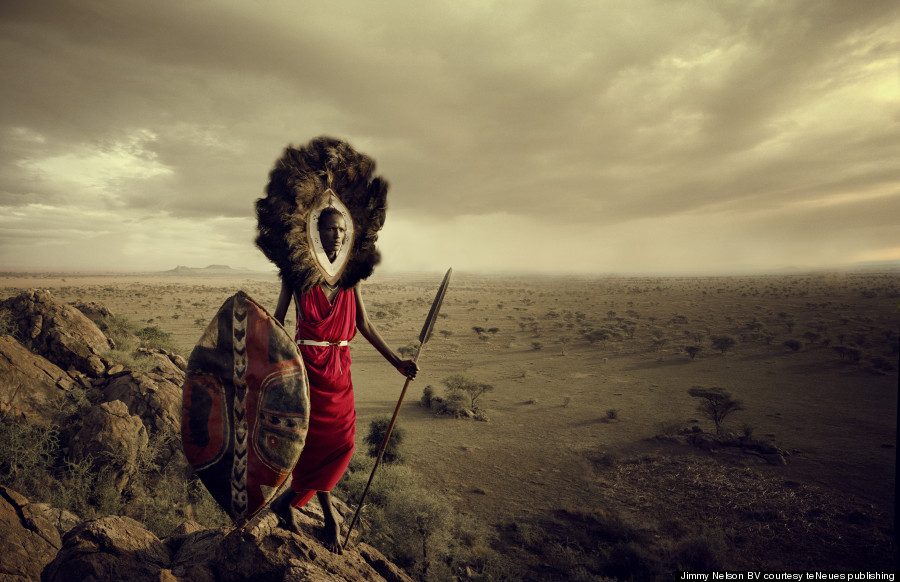 A Maasai warrior. "To be a Maasai is to be born into one of the world’s last great warrior cultures," Nelson's website reads. The Maasai people, who live in Tanzania and Kenya, are said to have migrated to the region from Sudan in the 15th century.

Click here for more information on Jimmy Nelson's "Before They Pass Away" project.