“Hindsight is a beautiful thing,” says Kieran “Danger” Dooley. Back in 2004, the Dunedin-based man embarked on a brave, carb-heavy journey: He’d eat nothing but instant ramen noodles for a month.

Right -- for a full 30 days, Dooley planned to eat three servings of the packaged soup on which college students subsist. At the time, Dooley was enrolled full-time at university himself. “Being a student I ate noodles every other day," Dooley told HuffPost over the phone. "So I didn’t think there’d be any side effects at all." His hypothesis was quickly proven unsound, but when reminiscing, he is not remorseful of the experience.

The New Zealander was triggered to go down this noodle-y road after he had watched the 2004 documentary, "Super Size Me," in which filmmaker Morgan Spurlock documents his own 30 days of eating nothing but food from McDonald's. “I thought, if he can eat McDonald's for a month, I can do noodles for a month. I always one-up everyone." He began by purchasing 90 packages of instant ramen, which would allot him three servings a day. 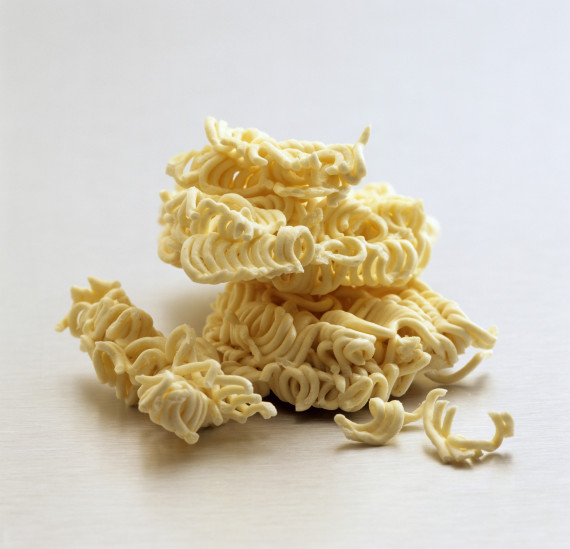 Dooley says he rotated between Maggi and Trident brand noodles in several flavors he doesn't care to recall, due to the nausea-inducing factor of simply talking about ramen. He does say he rotated flavors. “I tried to keep it varied -- variety being the spice of life in everything.” He attempted to prepare the noodles in different ways by microwaving, removing the water, adding a select amount of seasoning. But he didn't add anything that didn't come with the product. "There are only so many things to do with them."

A package of Maggi 2-Minute Noodles (curry flavor) contains 430 calories, 16 grams of fat, 63 grams of carbohydrates, and most alarming, 1,300 mg of sodium. On the days the New Zealander successfully stomached his allotted three servings, he ingested 3,900 milligrams. The FDA recommends the average person consumes no more than 2,300 mg of salt per day. A diet too high in sodium increases the risk for ailments like stroke, heart attack and high blood pressure.

But Dooley wasn't always able to consume his appropriated three-a-days. By the end of the month, he guesses he had about five packets remaining. "There were some days when I could just eat one or two. Everything was shutting down, I couldn't take any more." A week and a half into the challenge, Dooley strayed from the all-ramen diet and attempted to drink two beers. But cheating didn't go over well. "I got very sick. My stomach felt like crap and my brain stopped working properly. Usually I can drink a dozen beers, but after two I was quite sick.”

By the end of the month, Dooley had lost 11 kilograms (about 24 pounds). He says he always felt lethargic and sick to his stomach. There were headaches, too. The effects were not just physical. "I got incredibly moody. I kept losing count of the day." He says he wouldn't describe himself as depressed, but the feeling of "meh" overruled almost every hour. "I'd wake up in the morning and I wouldn't want to get out of bed. It got to the point where I didn't even want to eat -- It didn't matter whether it was noodles or normal food. I dreaded eating."

Dooley spent most of his days at home with about 10 days left in the salty trip. "I wasn't interested in interacting with other people. I got quite melancholy." Despite the upsetting changes he went through, he said his friends were understanding. His flatmates tolerated his mood swings, though Dooley says he wouldn't have been able to put up with himself. And those who questioned the experiment quickly became supportive once Dooley explained his self-torture. "I was doing it in the name of science. It was personal sacrifice I was willing to take and it was only for a month. Once I explained that to them, [people] were quite understanding. "

At last, the calendar changed and Dooley left home for his first non-ramen food in 30 days. His first meal was sushi. "It actually went down really well." Dooley says he and just two other friends went out to the restaurant; he didn't want to make a big celebration of his food freedom, in case things didn't stay down.

It's been 10 years, but Dooley will not be repeating his ramen noodle diet any time soon. (I couldn't finish asking, "Would you do it again?" before he interrupted with a confident "No!" over the phone.) But he doesn't regret the experience, and looking back, he says he learned something about himself. "I learned that I had the capability to take it on and do what needs to be done. It was hell, but it was worth it."

You can watch Dooley's documented experience in his YouTube video below:

On Assignment For HuffPost

Rylan Clark Is All Of Us As He Discovers A Snake In His House (And He Was Hungover. Rylan, Not The Snake)