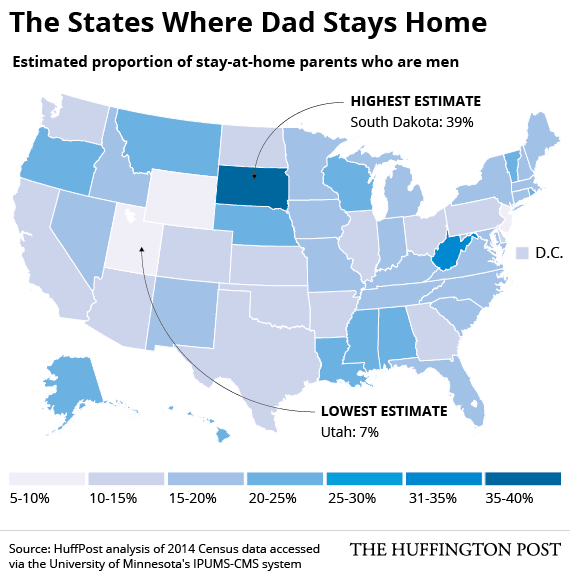 Not too long ago, it was practically unheard of for a father to raise his children full-time instead of working for money. In the 1970s, only six U.S. men identified themselves as stay-at-home parents. Not 6 percent -- six men, in the entire country.

Last year, by contrast, an estimated 1.9 million fathers remained home with the kids -- accounting for 16 percent of the stay-at-home parent population, according to a HuffPost analysis of U.S. Census data.

That’s definitely a huge step forward for fathers seeking to shed the stigma that still lingers around the idea of a man as primary caretaker. But the figure comes with a significant caveat: Most fathers aren't staying home voluntarily. According to one prominent researcher, 80 percent of those 1.9 million dads would be working outside the home if they could.

The reasons why any parent might stay home are complex and often very personal. The job market is certainly a factor, but the cost of child care and cultural issues also likely play a key role, says Noelle Chesley, an associate professor of sociology at the University of Wisconsin-Milwaukee who has researched stay-at-home fathers.

The Huffington Post took a state-by-state look at men as stay-at-home caregivers, as seen in the map and table in this article. We found some instances where high proportions of dad caregivers seemed to correspond with high unemployment rates. In West Virginia, for example, where men account for an estimated 30 percent of stay-at-home parents, the unemployment rate is 6.6 percent -- well above the national average of 5.4 percent -- and the percentage of adults who are employed is the lowest in the nation.

Yet elsewhere, the correlation did not hold. In South Dakota, for example, 39 percent of stay-at-home parents are fathers, but unemployment is comparatively low.

The very definition of "stay-at-home dad" is also up for debate. The Census Bureau defines the term very narrowly, excluding same-sex partners, single dads and parents of kids who are older than 15, as well the fathers in families where both parents do not work.

Our analysis used a broader definition: any father who's been unemployed for at least a year, and who is also at home with a child or children under 18. With this approach, we sought to replicate the methodology used by the Pew Research Center in a 2014 report.