Wigan Athletic have signed Ángelo Henríquez on loan from Manchester United for the rest of the season.

The 18-year-old becomes the second signing of the January transfer window after Roger Espinoza’s imminent arrival as the Latics strengthen their squad ahead of another potential relegation battle.

Chilean Henríquez, who signed for United in the summer but is yet to make a first-team appearance, could make his debut Wigan against Bournemouth in the FA Cup this Saturday. He will wear the number 11 shirt.

“We’re really excited about Angelo because he is a very young man with a huge potential; he’s a goal-scorer with clever movement inside the box and has had a very successful time with his former club Universidad.

“We hope to have a good partnership in terms of allowing Angelo to develop as a footballer and learn of the demands of the English game, because I feel he can bring us something different in the forward line. 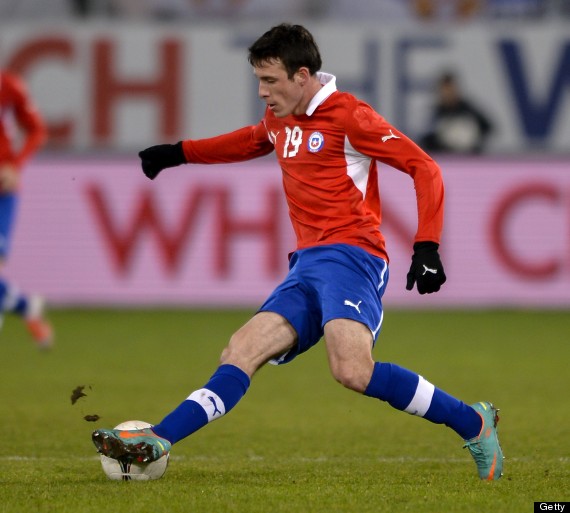 Henríquez is a Chilean international

“I’m sure the fans will give him a great welcome on Saturday and it will provide him with the perfect opportunity to begin his experiences on the pitch in English football which is very exciting.”

Henríquez added: “This is a fantastic opportunity for me and I am really excited after the manager has given this chance for me to prove myself. Now I need to work to try and earn my place in the team.”

Henríquez joined United from Chilean side Universidad de Chile and has featured in a number of reserve games.

United midfielder Tom Cleverley enjoyed a season-long loan with Wigan in the 2010-11 campaign prior to his breakthrough in the United first-team the following season.

Emotional Adele Chokes Up As She Plays Homecoming Gig: 'I'm So Happy To Be Here'

Oti Mabuse Reflects On Her Least Favourite Strictly Partnership: 'We Just Didn't Understand Each Other'

5 Things That Have Gone Pretty Wrong For Russia This Week

Everton Vs Manchester City Called Off After Covid Outbreak

Susie Wolff Is Bringing Diversity To The World Of Formula E

The Decade In Sport

Bury Kicked Out Of English Football League After Takeover Collapses

England Are In The Cricket World Cup Final. Here's How You Can Watch It On TV For Free

Cori Gauff: Who Is The 15-Year-Old Who Beat Venus Williams At Wimbledon 2019

Cori Gauff, 15, Pulls Off Stunning Win Over Venus Williams In Wimbledon First Round

Wonderful Wimbledon: All You Need To Know About The World’s Oldest Tennis Tournament