Rafael Benítez launched a premeditated attack on the Chelsea fans who despise him and the club for undermining him, after the Blues' 2-0 FA Cup win at Middlesbrough.

Despite progressing through to the quarter-finals, Benítez instead focused on the unflattering chants from Chelsea's following, who have shown no signs of acceptance for a man they came to loathe during his six years at Liverpool.

Told to "f**k off" and informed he was "not welcome here" by a section of Chelsea fans during the Europa League draw with Sparta Prague last week, Benítez could not contain his irritation and clarified he would not be staying at Stamford Bridge beyond May.

Below is an abridged version of the Spaniard's post-match press conference.

"'I have been in charge in football for 26 years. I have won the Champions League, won the FIFA Club World Cup, the FA Cup, the Italian Supper Cup, the Spanish league twice, nine trophies, all the trophies you can win at club level," Benítez began.

Benítez at the Riverside Stadium on Wednesday night

"A group of fans, they are not doing any favours for the team when they are signing and wasting time preparing banners.

"'I have been in charge in football for 26 years. I have won the Champions League, won the FIFA Club World Cup, the FA Cup, the Italian Supper Cup, the Spanish league twice, nine trophies, all the trophies you can win at club level.

"A group of fans, they are not doing any favours for the team when they are signing and wasting time preparing banners.

"They have to concentrate on supporting the team, that's what they have to do.

"In the end, they are not doing any favours to the club, to the rest of the fans and to the players.

"Every game they continue singing and they continue preparing banners, they are wasting time. What they have to do is support the team. 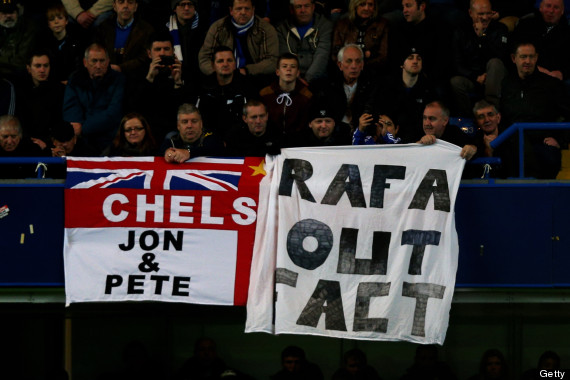 Several anti-Benítez banners have been displayed by fans

"If we cannot achieve what we expect to achieve, that is to be in the top four and be in the Champions League for next year, I will leave; they will stay in the Europa League.

"They have to take responsibility too. If they put players under pressure, they don't create a good atmosphere at Stamford Bridge, they have to realise they are making a big mistake because the rest of the fans would like to see the team in the Champions League next year.

"I'm the manager and I will be managing the team. I like to manage players and not names, so I will pick my team, and I will make decisions and at the end of the season, I will leave anyway because I am interim like they said.

"I am a professional and I am sure if we win, I will be the happiest man in the world.

"But if a group of fans continue with their agenda and they continue not supporting the team and wasting time with these things, it's there decision, but they are not doing any favours to the team, to the club, anyone.

"The problem is a group of people who think they can say what they want instead of supporting the team.

"I will do my job, I will try to win every game until the last minute, that's it." 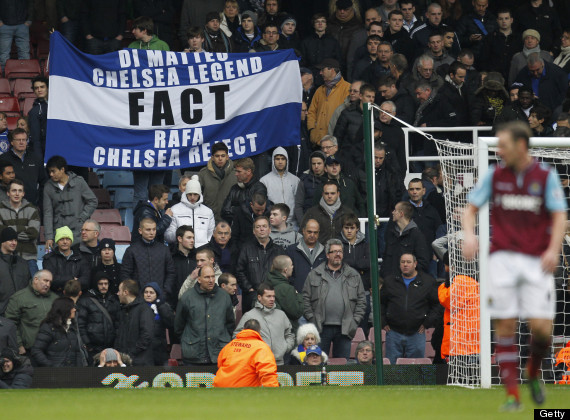 "Again I will say I have won nine titles, all the titles that you can win at club level, in three different countries, so I think I have enough experience and enough quality as a manager to hear a group of people with an agenda carry on.

"They don't realise that I will leave at the end of the season. They don't need to be worried about me, but what they have to do is support the team.

"If they don't do that and we are not in the Champions League at the end, they can blame whatever they want, but we will see the next year the Europa League."

"Again I will say, a group of fans, they don't realise - the rest of the fans, they want to see the team in the Champions League.

"This group of fans, they have an agenda, they say 'We are right'. They can be right at the end of the season, it's simple.

"They put me there with the title 'interim', so why do they have to bother about that? Just carry on supporting the team.

"They [the fans] don't realise it was a time of transition when I came here. The team was not in the Champions League, the team has lost some trophies, so I am trying to do my best and I will try to do my best until the end, until the last minute.

"It doesn't matter what they say. I am a professional, I have experience and I will do my best.

"But if they carry on in the same, they have to take responsibility because they are damaging the image of the club and the rest of the fans because people think all the fans are the same.

"I have a title. Someone decided the title would be 'interim'. Why? Just in case?

"If they want to blame me for everything that is wrong and then they say, 'We will put interim just in case', fine, that is your decision.

"I don't agree, but it's your decision and now everybody has to take responsibility. If we are in the Champions League, I will be the happiest man in the world.

"But next year, I will leave anyway because I have finished my contract, so they don't need to be worried about me. What they have to do is concentrate on supporting the team. 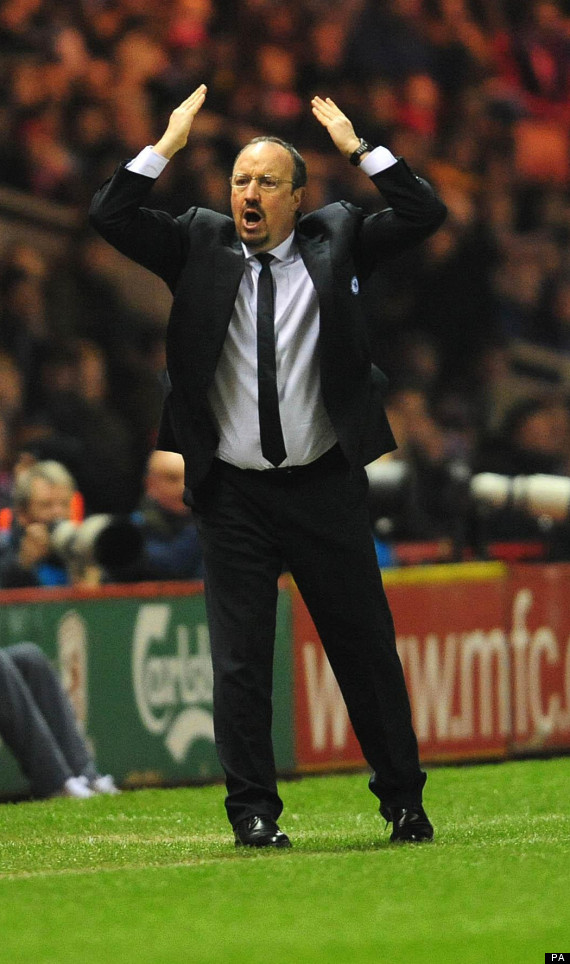 Asked whether he knew he would be given the title "interim manager", Benítez replied: "It was a surprise for me."

"I am the manager and I will be the manager until the last minute until someone decides, 'No, you are not'.

"Everybody is interim because after you, there is another one. But in this case, they didn't have anyone, so why put 'interim'?

"It's just to say to everyone, 'Because he was in Liverpool and just in case, we will put interim and then we will wash our hands'."

"The reason why a group of fans is not happy is because I was Liverpool manager and we played in the Champions League, massive games. That's it.

The timing of Benítez's calculated diatribe could make his position untenable at Chelsea, considering the manner of predecessor Roberto di Matteo's dismissal.

Di Matteo exclaimed to owner Roman Abramovich "I did it!" as he collected his winner's medal for the Champions League final triumph last year. A moment caught on camera, it was privately not appreciated by the Russian who has bankrolled Chelsea's success over the last decade.

Abramovich grudgingly appointed Di Matteo - but only on a two-year contract - with the hope he would bring Pep Guardiola to Stamford Bridge this summer. Guardiola was even offered £18m a year to end his sabbatical early and replace Di Matteo in November, but Bayern Munich last month confirmed he would join the Bundesliga giants in July.

Michael Emenalo, Chelsea's technical director who advised Abramovich Benítez should replace Di Matteo, could also come under the microscope. From his initial appointment as head scout to Avram Grant in October 2007, he was even promoted to assistant manager after the controversial sacking of Ray Wilkins in 2010, but is becoming an increasingly maligned figure among Blues fans after Benítez's appointment.

Boris Johnson Says Question Of His Leadership Is 'Settled'

Here's How Often You Should Actually Wash Your Face

'Back to the Middle Ages': The Glastonbury Acts Who Spoke Up About Abortion

What Does The US Ruling On Abortion Rights Mean For The UK?

Everton Vs Manchester City Called Off After Covid Outbreak

Susie Wolff Is Bringing Diversity To The World Of Formula E

The Decade In Sport

Bury Kicked Out Of English Football League After Takeover Collapses

England Are In The Cricket World Cup Final. Here's How You Can Watch It On TV For Free

Cori Gauff: Who Is The 15-Year-Old Who Beat Venus Williams At Wimbledon 2019

Cori Gauff, 15, Pulls Off Stunning Win Over Venus Williams In Wimbledon First Round

Wonderful Wimbledon: All You Need To Know About The World’s Oldest Tennis Tournament