'Gold-digger, witch, heretic, adulterer', the politics of her age may have vilified her, but Queen Anne Boleyn has led a love affair with modern literature and television adaptations - the second wife of Henry VIII continues to fascinate us.

A new play has given the story of the headstrong 'terrible Tudors' victim an extra edge of historical realism. Fallen In Love is staged in the heart of the building that imprisoned Boleyn and became her final resting place: the Tower of London.

Boleyn was found guilty on 15 May 1536 and beheaded four days later. This Sunday will mark the 477th anniversary of her execution.

Fallen in Love, produced by Suffolk theatre company Red Rose Chain, is the story of Anne Boleyn’s supposed incestuous relationship with her brother, George, performed in the Banqueting Suite of the Tower.

HuffPost UK caught up with Joanna Carrick, writer and director of Fallen In Love, to chat about ravens, incest and ghostly goings-on at the Tower of London:

Why do you think the love story and tragedy of Anne Boleyn still fascinates people around the world?

Henry risked so much to marry Anne - he had to turn the world upside down, rejecting the Pope and engineering the "first divorce in history" - but the love affair turned so brutal in the end.

Anne emerged from the court to become the Queen - her determination and ambition in a world where women were denied so much can't fail to inspire.

Did you always have it in mind to stage Fallen in Love at the Tower of London? Was it easy to arrange with the management at the Tower?

It's the perfect venue. We first performed the play two years ago at our base Gippeswyk Hall in Ipswich. It was a great success and got votes of confidence from some wonderful historians, most notably Alison Weir and Susannah Lipscomb.

Alison mentioned the play to the Chief Executive of the Historic Royal Palaces and things went from there. It's taken a long time to negotiate and arrange. The Tower is quite a scary place in many ways. The people are lovely but the security and procedures are understandably quite strict.

Will there be Beefeaters on guard at the performances?

Well yes, I think so...but don't worry they're very friendly and excited about the play too.

What extra atmosphere do you hope the Tower will add to Fallen In Love?

The setting can't fail to intensify the emotional punch of the play. I think it will be most telling when the audience leave the auditorium and see the execution site.

The ravens are also mentioned in the play and they give the place an eerie feeling...after all, their ancestors will have been there when the real executions took place. 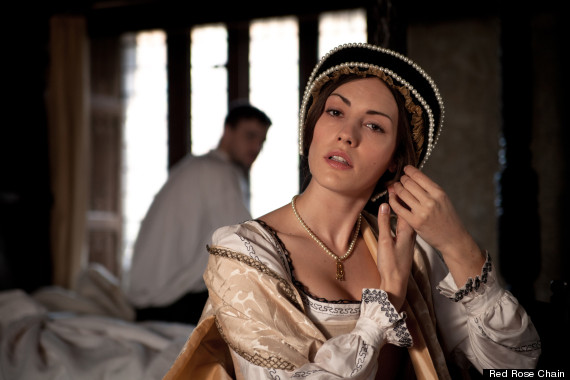 The Tower is supposedly one of the most haunted buildings in London, including sightings of Anne's ghost. Do you think you'll be having an extra ghostly audience member watching the play on opening night?

I do hope so. In her execution speech Anne said: "If any person will meddle of my cause, I require them to judge the best."

I've kept that in mind throughout writing and directing the play. I have rigorously stuck to the historical facts and I don't portray Anne as a perfect saintly Queen but as a real woman, flawed but brilliant in so many ways. I hope she would and will approve.

Whilst rehearsing, have you experienced any ghostly goings on?

No not really, although the actors seem to think it's hilarious and pretty freaky that I used to imagine Anne sitting next to me in my car while I was writing the play.

To get her voice right and understand her, I imagined endless conversations with her.

Historians are divided over Boleyn's 'guilty' verdict for treason and incest. Do you think Anne Boleyn was incestuous with her brother, or was she just a victim of politics?

Anne was definitely a victim of politics and the brutality of the day. Her relentless ambition and that of her brother George of course played a big part in their downfall.

As to whether they were guilty of incest....well I guess you should come and see the play and decide for yourself.

Watch the trailer for Fallen In Love:

Here's Why You Shouldn't Actually Make Your Bed First Thing

Tories Under Pressure To Remove Whip From MP Accused Of Rape

Which Is Cheaper: Working From Home Or Working In The Office?

Why Are High School Movies So Fond Of Dead Mums?

7 Things We Learned From Joe Wicks: Facing My Childhood

Black Mirror Returning For New Season On Netflix After 3 Years

What Does Ukraine's Victory Mean For Next Year's Eurovision?