To celebrate the release of 'All Stars', out on Blu-ray and DVD now, The Huffington Post UK are giving you the chance to win a state-of-the-art Zoom Q2HD camera to capture all your moves in stunning quality.

Ethan (Theo Stevenson) and Jaden (Akai) have a plan - recruit a dance crew, stage a talent show, raise lots of money and save their youth club ‘The Garage’ from demolition…all whilst Ethan impresses the girl of his dreams with his dancing skills. The trouble is… Ethan can't dance, Jaden's parents have banned him from dancing and the other four members of their new crew the ‘All Stars’ turn out to be totally uncoordinated! Together, they must overcome these many obstacles, starting with convincing Gina (Ashley Jensen), the manager of The Garage, that their plan even stands a chance. 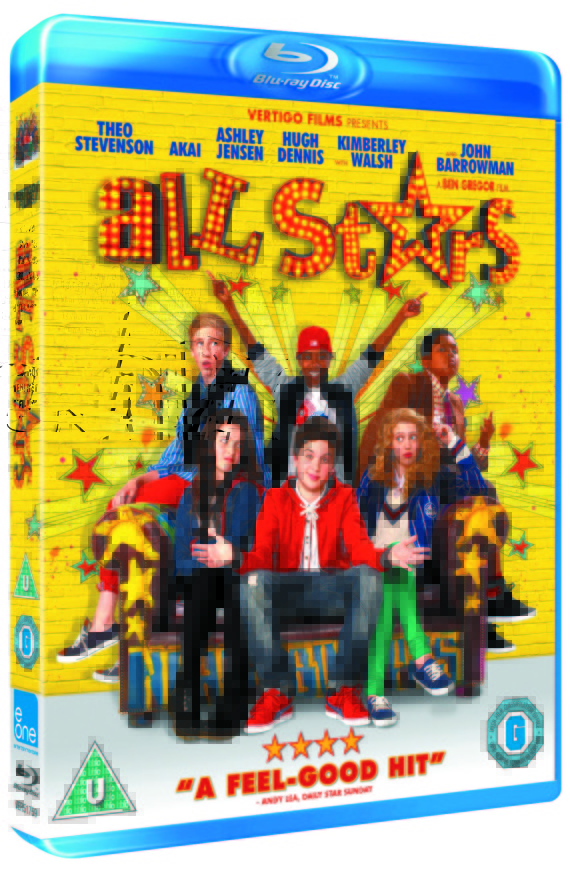 To be in with a chance of winning this great prize, simply watch the trailer (above) and head to the competition on our Facebook page to answer the simple question.

'All Stars' is available to own on Blu-ray and DVD now.

For further information and to get to know the All Stars visit us here www.facebook.com/AllStarsMovie or tweet @AllStarsFilm

By entering this prize promotion, you accept and agree to be bound by the following terms and conditions:

• The prize promotion is open to all UK residents (excluding Northern Ireland) aged 18 years or over except employees (and their families) of any affiliates or subsidiary companies, as well as representatives or agents of AOL and anyone else who may be involved or connected with the prize promotion. Any entries submitted by agents or third parties will be invalid and will not be accepted by the Promoter.

• The prize promotion closing date is 9th September (the "Closing Date") and any entries received after the Closing Date will not be accepted by the Promoter.

• The winning entry will be selected at random on the 10th September. The winner will be notified by via telephone and email within 3 days. To contact you we will use the contact details supplied by you when entering the prize promotion.

• Only one entry per person is permitted.

• Submission of entries will not constitute proof of receipt and no responsibility will be accepted by the Promoter for entries or acceptances which the Promoter does not receive. The Promoter shall not be liable for any loss or corruption of data in transit. No responsibility will be accepted for entries or acceptances which are lost, delayed or damaged in the post or elsewhere. Illegible, incomplete, late or defaced entries will be disqualified.

• The prize must be taken as offered. No cash equivalent or other alternative prize are available in whole or in part except as provided for in these terms and conditions.

• The winner(s) agree to participate in any publicity or other such promotional activities which the Promoter may reasonably require in connection with the prize promotion and the Promoter shall have the right to use each winner's name, likeness, image, voice and biographical information for advertising and promotional purposes in connection with the prize promotion in all media without further notice and without the need to make any payment to any winner for such use.

• The decision of the Promoter is final and binding and no correspondence will be entered into regarding the outcome of the prize promotion.

• No purchase is necessary to enter this prize promotion.

For Those With Borderline Personality Disorder, The Depp-Heard Trial Hurts

I'm Trying To Break Up With Fast Fashion, But It Really Isn't Easy

Want Anti-Ageing Retinol But For Sensitive Skin? We Love This Brand

If You're About To Quit Your Job, Delete These 5 Things

This Speedy 'Bionic Reading' Hack Has Gone Viral, But Is It Any Good?

Is That Forrest Gump In The Background Of This Photo Of The Queen?

24 Behind-The-Scenes Secrets From The Set Of Heartstopper

Margot Robbie To Presumably Rob Someone In Ocean's Eleven Prequel

'Undoubtedly His Best Record Yet': The Reviews Are In For Harry Styles' Third Album Harry's House

Rihanna Has Given Birth To Baby Boy: Reports

Why Are High School Movies So Fond Of Dead Mums?