Do not pass go and do not collect £200 - American Street Artist Alec Monopoly wants you to think twice about capitalism, luxury and excess with the opening of his new London show.

Known for his bold, bright and colourful Street Art featuring playful pop culture characters in contemporary situations, Alec Monopoly has sold his art to some major celebs, including Miley Cyrus, Robin Thicke and Snoop Dogg, along with creative collaborations with Madonna and actor Adrien Brody.

HuffPost UK caught up with Mr Monopoly to find out about his game strategy in the world of art.

Is Alec Monopoly your legal name?

No, I have that name for my protection, so I can do illegal graffiti. Also there's a lot of beef in the graffiti world, a lot of haters out there. So the alias is for my safety. Graffiti artists can be very territorial, I've had numerous run-ins.

How do Hasbro, the owners of Monopoly, feel about your use of their cartoon mascot Uncle Moneybags? Have they ever been in touch?

I've spoken with Hasbro. I'm just creating unique pieces of artwork, I'm not creating reproductions or t-shirts. It's Fine Artwork and Graffiti Artwork, so they're ok with it. 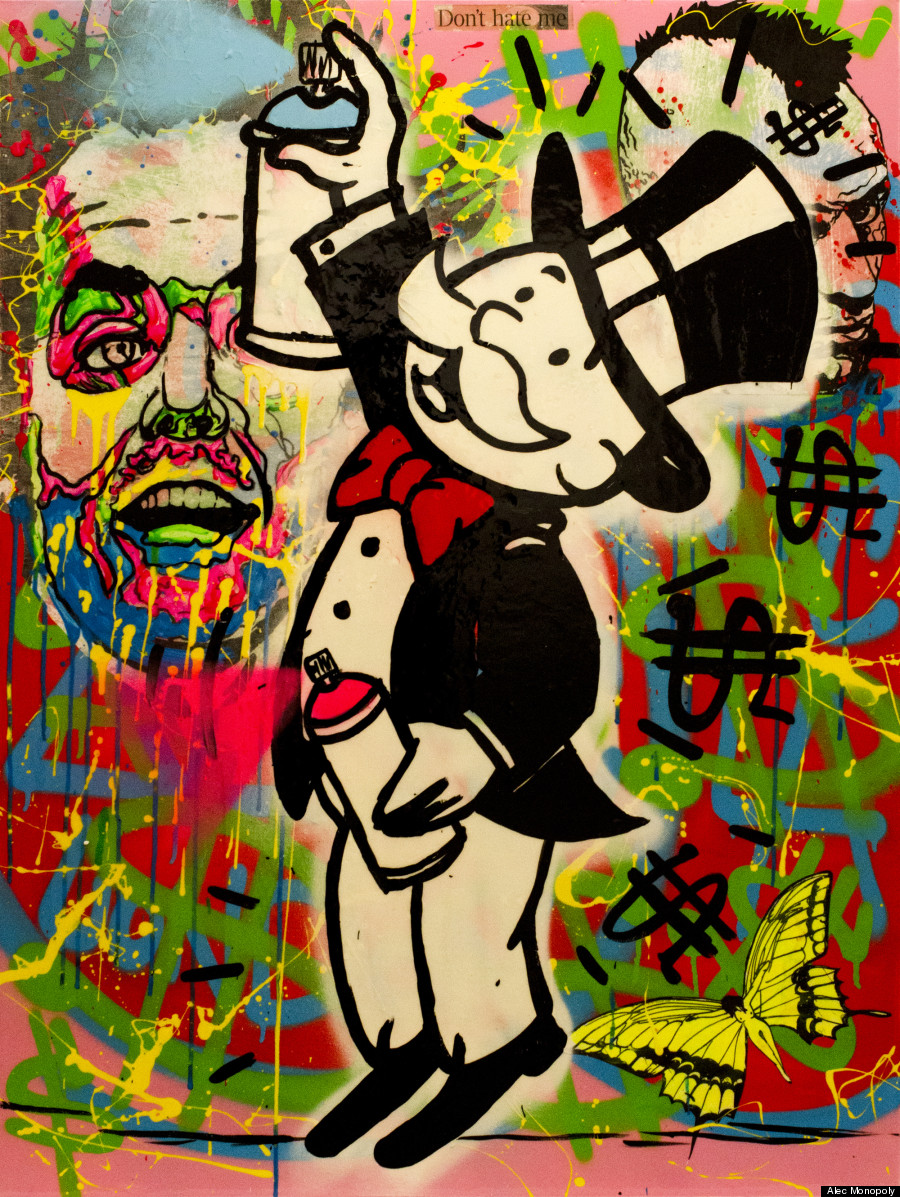 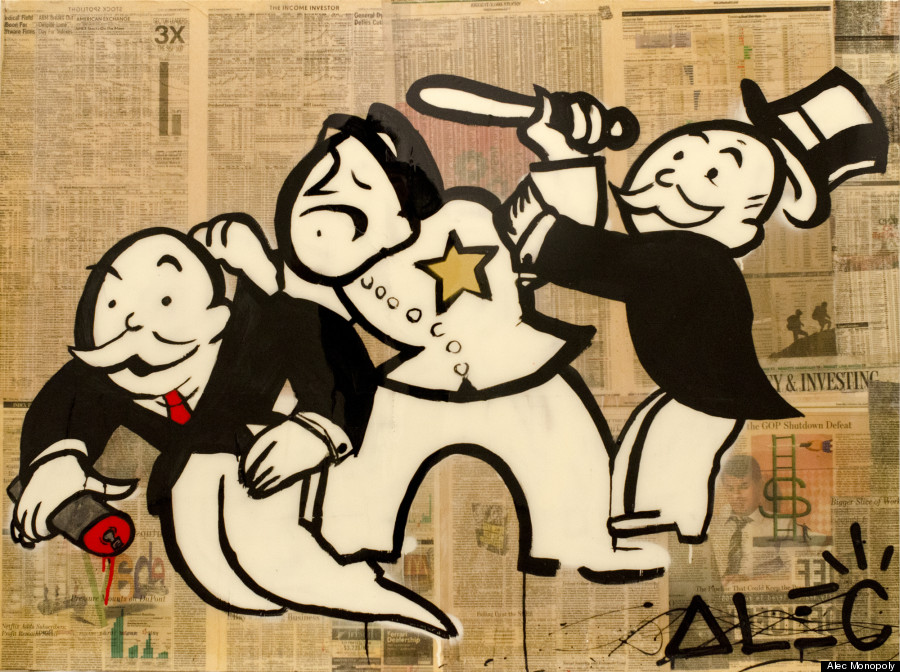 Do they mind the strong images involving Uncle Moneybags? For example, showing him being crucified and holding a Tommy gun?

I try to keep my imagery positive, so I'm not bashing the Monopoly guy, I'm embracing him and putting him in contemporary situations. 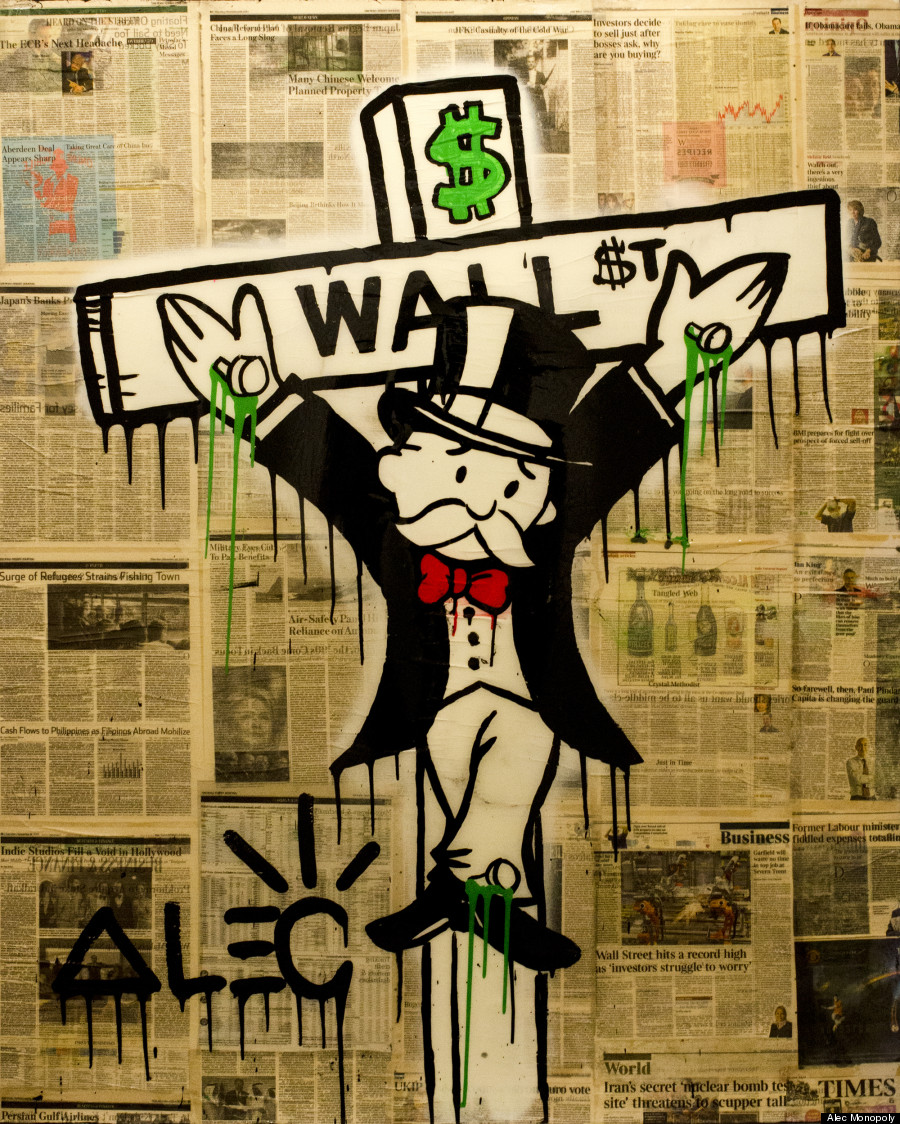 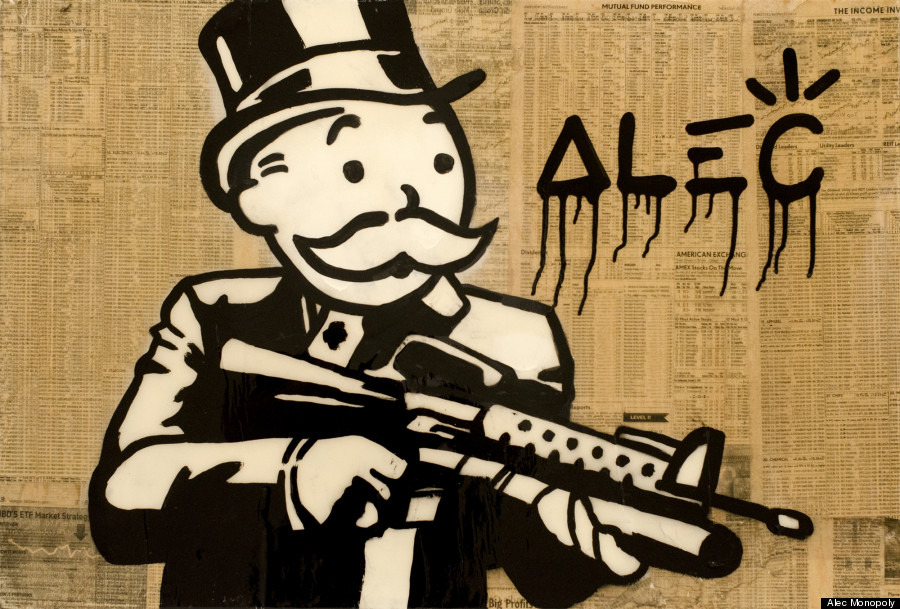 Did you play Monopoly as a child?

I loved it. I would always be the race car. I still play it.

With your portrayal of money, are you condemning capitalism or embracing it?

Monopoly started out as a symbol of what was going on in the economy. At the start of the recession in 2008 I started portraying Bernie Madoff [the disgraced American financier] in my art and using Monopoly money in the background. Then one day I was playing Monopoly and realised that Bernie Madoff is like Uncle Moneybags. That's when I shifted to using the character as a symbol on Wall Street.

You're popular in the celebrity world - your work can be found in the homes of Miley Cyrus, Robin Thicke, Snoop Dogg, Seth Rogan, Adrien Brody and Iggy Azalea, and even Anchorman's Ron Burgundy. Is your engagement with celebrity something you've encouraged, or has it just happened?

It's nothing I had in mind or had as a goal, I just started doing this in the streets for fun. My art dealers and agents have reached out to these different celebrities. I usually stay low key in my studio. You don't ever see me dying to take a picture with these celebs, that's not really my thing. But I'm good friends with Adrian Brody, we've travelled together in Thailand. 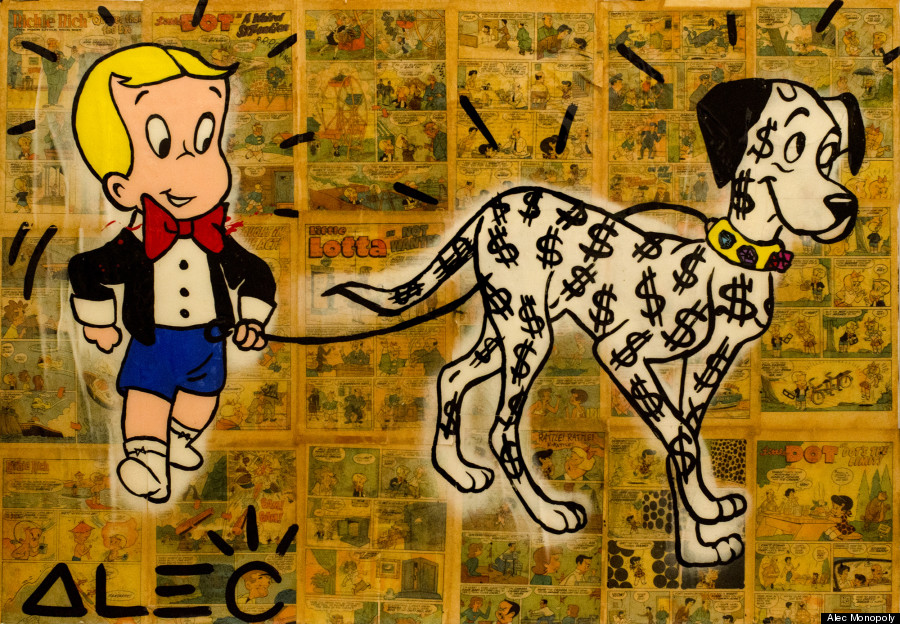 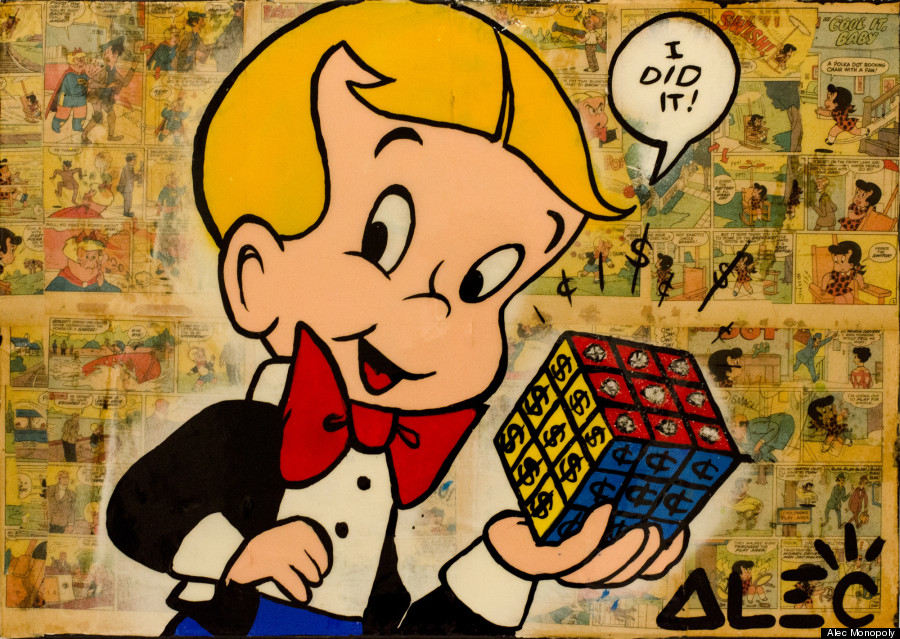 Which piece of your art is on Miley Cyrus' wall?

Miley has DJ Monopoly, she received it during the recent EMA awards in Amsterdam.

What rewards do you get out of art? Catharsis? A reinvention of yourself?

I always have to be working, I have really bad ADD [Attention Deficit Disorder]. So I'm always working on a million things at once. So if I'm not painting I get anxiety. The most fun for me is doing graffiti in the streets and seeing the public's reaction to it, which is usually positive.

Over the last 15 years or so, the rise of artists like Banksy has brought Street Art to the into the media spotlight even more so, are you grateful for that?

Years back, artists like Keith Haring were in the spotlight, but after that street art disappeared and there was only really graffiti art, but Banksy brought Street Art back into the public eye, showing you can have art painted on to a wall, but you can also have fine art in a gallery.

In a recent interview, Banksy said: "There's no way round it—commercial success is a mark of failure for a graffiti artist … Obviously people need to get paid—otherwise you'd only get vandalism made by part-timers and trust-fund kids." Do you ever feel torn between your art and your sales figures?

It happens all the time, you have these battles with yourself when you have an art show coming up. It really stops you from being able to hit the streets as much because you're putting more energy into canvas, than you would put into the streets.

I know tons of extremely talented street artists that never get to travel and really can't succeed because they don't have the funds to travel, so I use the gallery shows as a vehicle to travel to different cities and to be able to paint and have a studio. 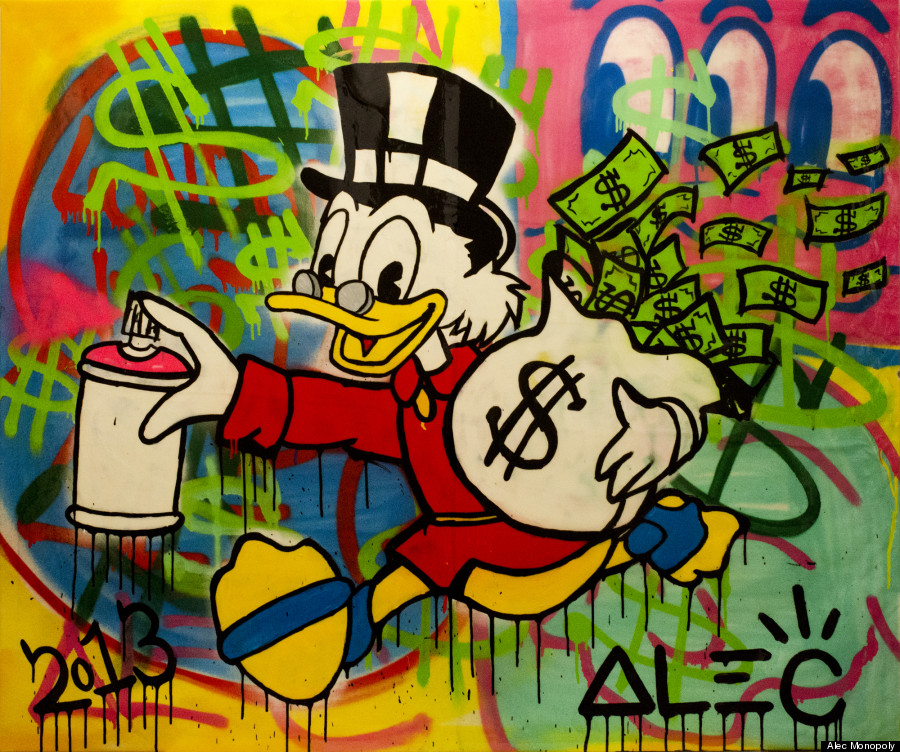 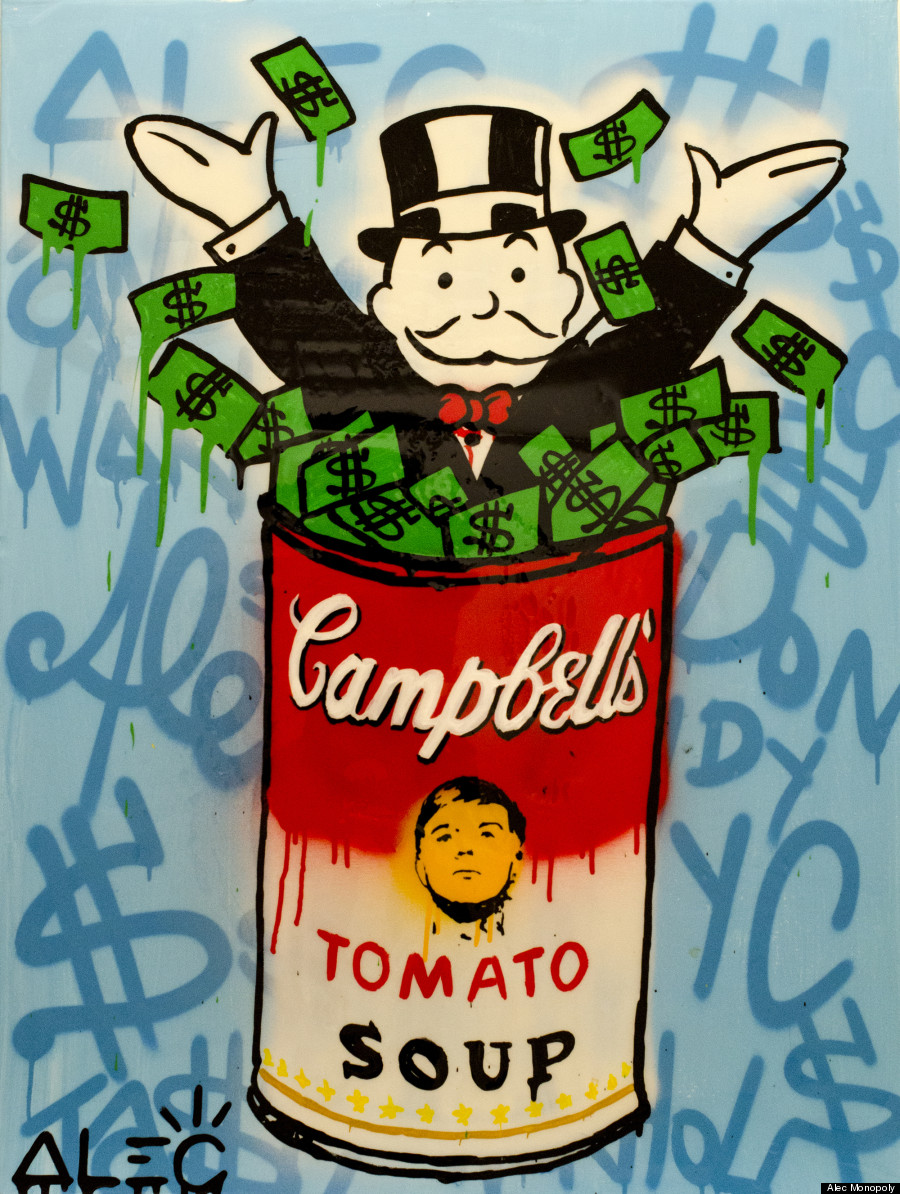 It feels as thought Street Art is becoming more formalised - street art festivals, designated areas, councils recognising the value. This year we saw Norway embrace Street Art so much that it allowed one of its air traffic control towers to be painted. Do you think this might take the spice and power out of Street Art for you?

No, I'm addicted to doing illegal street art, it's like a rush. I find myself sometimes coming to a city where I'm given walls where i can paint. But I'll find myself hitting the streets doing art on illegal spots before I even get to the legal ones. That rush is part of the addiction I have to doing graffiti. 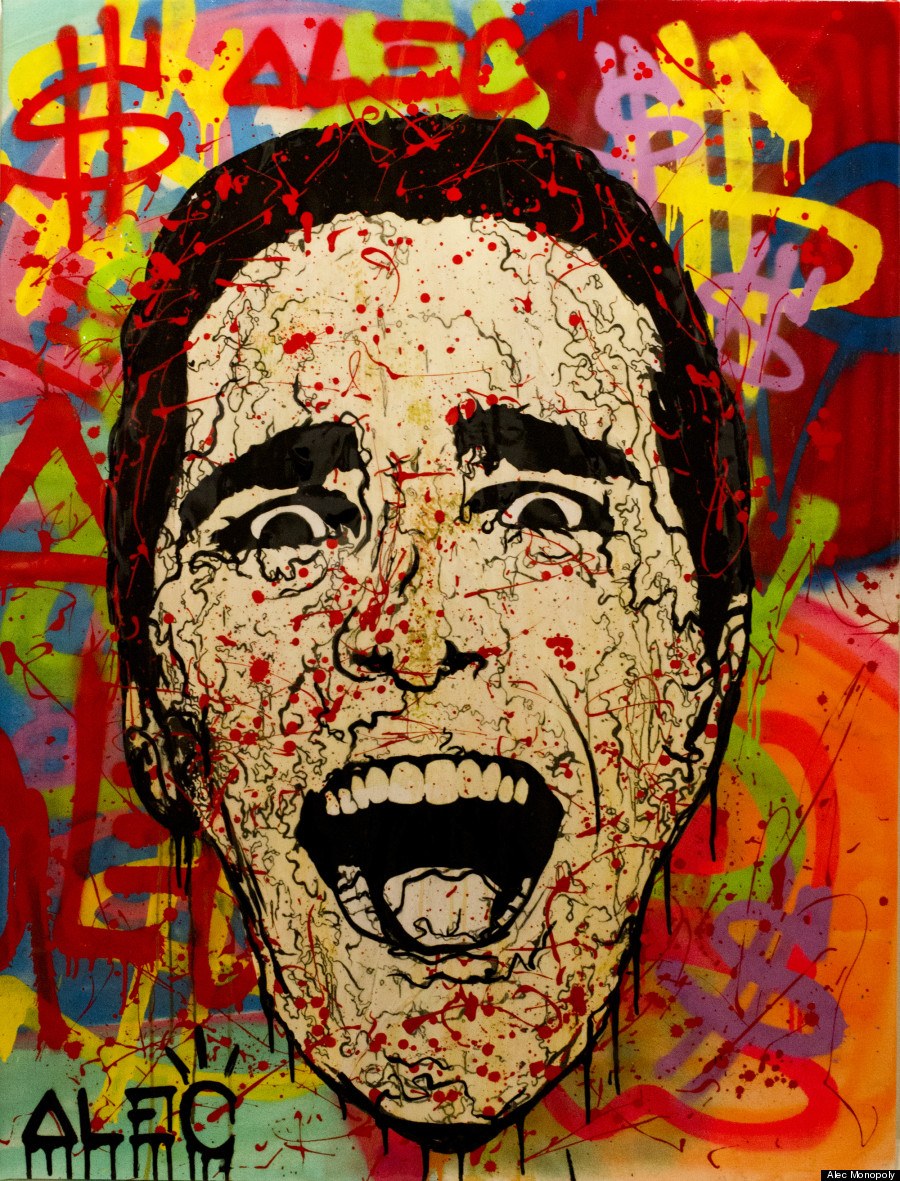 I've had so many different run-ins. I've been chased by rival graffiti gangs and hidden under cars. In New York the police raided my studio, which was connected to a hotel, so when the cops were outside I jumped through a garbage shoot and climbed through all this rot and came out the other side, then hopped in a cab. I think they were tapping my phones.

New York now have the vandal squad unit, a whole detective unit of cops where all they do is look for street tags and search us out to shut down our art shows. They're really after us. The funny thing is, a lot of them know about the graffiti world because they used to write graffiti themselves - some of them are ex-artists. I try to steer clear of them.

Alec Monopoly's show 'Luxury Tax' is at the Mead Carney, London, until 10 January 2014.

Flick through more Street Art from the Nuart 2013 festival in Norway:

Here's The Full List Of Winners From The 2022 BET Awards

Victoria Scone: 'We Can't Stop Until Everyone Can Live Their Lives Unapologetically'

Vanity Milan: 'No One Is Ever Going To Stop Us Being Who We Are'

ITV Confirms It's Giving Winter Love Island Another Try In 2023

Mollie King Announces She Is Pregnant With Her First Child