To celebrate the release of 'Jack Ryan: Shadow Recruit', in cinemas nationwide on 24 January, we’re giving you the chance to win a Samsung Galaxy Tab 3 and Jack Ryan Goody bag.

Based on the character created by bestselling author Tom Clancy, 'Jack Ryan' is a global action thriller set in the present day. This original story follows a young Jack (Chris Pine) as he uncovers a financial terrorist plot. The story follows him from 9/11, through his tour of duty in Afghanistan, which scarred him forever, and into his early days in the Financial Intelligence Unit of the modern CIA where he becomes an analyst, under the guardianship of his handler, Harper (Kevin Costner). 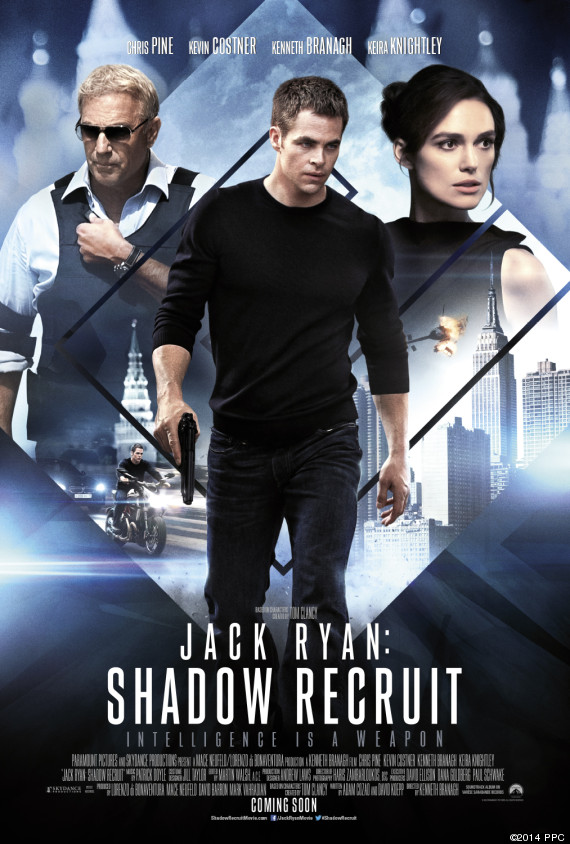 When Ryan believes he’s uncovered a Russian plot to collapse the United States economy, he goes from being an analyst to becoming a spy and must fight to save his own life and those of countless others, while also trying to protect the thing that’s more important to him than anything, his relationship with his fiancée Cathy (Keira Knightley).

To be in with a chance of winning simply watch the trailer above, follow us on Twitter (@huffpostukent) and send us the answer to the question below via Twitter.

How many years has Jack been lying to his wife?

By entering this prize promotion, you accept and agree to be bound by the following terms and conditions:

• The prize promotion is open to all UK residents (excluding Northern Ireland) aged 18 years or over except employees (and their families) of any affiliates or subsidiary companies, as well as representatives or agents of AOL and anyone else who may be involved or connected with the prize promotion. Any entries submitted by agents or third parties will be invalid and will not be accepted by the Promoter.

• You may enter this prize promotion by entering your details and submitting your entry to the Twitter page @huffpostukent.

• There will be one main winner who will win a Samsung Galaxy Tab 3 (7inch with wifi) and a goody bag which contains an iphone 5 charger case, video camera pen, USB travel adapter and poster.

• Postage is included in the prize

• The prize promotion closing date is 24 January (the "Closing Date") and any entries received after the Closing Date will not be accepted by the Promoter.

• The winning entry will be selected at random on the 24 January. The winner will be notified by via email within 3 days. To contact you we will use the contact details supplied by you when entering the prize promotion.

• Only one entry per person is permitted.

• Submission of entries will not constitute proof of receipt and no responsibility will be accepted by the Promoter for entries or acceptances which the Promoter does not receive. The Promoter shall not be liable for any loss or corruption of data in transit. No responsibility will be accepted for entries or acceptances which are lost, delayed or damaged in the post or elsewhere. Illegible, incomplete, late or defaced entries will be disqualified.

• The prize must be taken as offered. No cash equivalent or other alternative prize are available in whole or in part except as provided for in these terms and conditions.

• The winner(s) agree to participate in any publicity or other such promotional activities which the Promoter may reasonably require in connection with the prize promotion and the Promoter shall have the right to use each winner's name, likeness, image, voice and biographical information for advertising and promotional purposes in connection with the prize promotion in all media without further notice and without the need to make any payment to any winner for such use.

• The decision of the Promoter is final and binding and no correspondence will be entered into regarding the outcome of the prize promotion.

• No purchase is necessary to enter this prize promotion.

Yes, Nadine Dorries Has Accused Someone Else Of 'Attention Seeking'

Tory MP Wades Into 'Blackmail' Row... And Makes Everything Even Hairer

'Up to Eight' Tories Are In Talks To Defect To Labour

18 Valentine's Day Cards That Will Make Your Crush Blush

So What Exactly Did Meat Loaf Mean When He Sang ‘I Won’t Do That’?