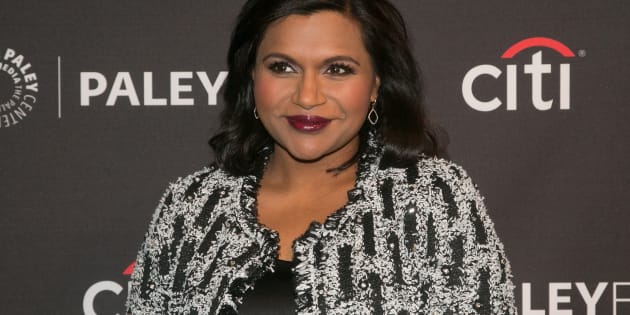 We already know Mindy Kaling is pregnant with her first child, but the news hasn't felt real until now.

On Thursday, the 38-year-old actress shared a bittersweet image of herself recording the final voiceovers for the sixth and final season of her show "The Mindy Project." In the pic, Kaling's baby bump is front and centre as she delivers the line, "Exsqueeze me, sir?!?!"

Although this isn't the first time we've seen Kaling's growing bump, it is the first time her pregnancy curves have really shown, and her fans are here for it.

Just check out these tweets:

I am living for @mindykaling's baby bump

@mindykaling posted a photo of her beautiful baby bump today and I feel like a very proud parent.

@mindykaling just posted her baby bump and I'm so happy! I was anticipating this day more than @Beyonces baby bump. ❤️💙👶🏾 pic.twitter.com/J7eTu9ddat

Kaling confirmed last month that she's having a baby girl. During an appearance on "The Ellen DeGeneres Show," the mom-to-be admitted she wanted to know the gender of her child "way early."

However, the father of her child is still unknown. When the actress' pregnancy news broke in July, a source revealed to People magazine, "She's not telling anyone — not even close friends — who the father is."

Despite this (and her nerves), the actress is excited to become a mom.

In a previous interview with "The Today Show," Kaling revealed what kind of mom she hopes to be. "Right now, I just feel so anxious," she said. "But I'd like to be the fun mom. I know I'm gonna be the dorky mom, so it could be kind of fun, too. I think that would be nice."

'You've Interrupted Me Every Time!' Dominic Raab And Nick Robinson Clash In An Excruciating Interview

This Is The Difference Between A Cold And Covid

So That's Why You Feel Thirsty After A Covid Booster Jab

Second Contestant Voted Off I’m A Celebrity… Get Me Out Of Here!