Kim Kardashian West has been put on the latest Vogue India cover for its chunky March issue. The double cover teases an ‘exclusive’ interview with the reality TV star and businesswoman, with Kardashian West wearing a couture tulle ‘saree-dress’ by Jean Paul Gaultier and a black slip by Phillip Plein.

Kardashian West’s sister Kendall Jenner faced a backlash when she became Vogue India’s tenth anniversary cover girl, and Kardashian West’s cover has again sparked a discussion across social media (especially Twitter) about whether this profile was the right move for the magazine in terms of representation.

Some have argued that Vogue India should give a voice to Indian women especially, rather than international stars and many of the faces and names the edition promotes are women who are either mixed or light-skinned with Eurocentric features. 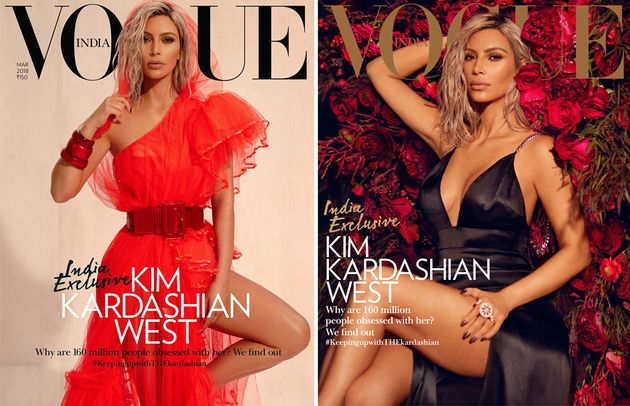 I have nothing against Kim Kardashian but @VOGUEIndia is really doing itself a disservice by continually neglecting to portrait brown women in their “magazine”— you’re perpetuating a detrimental cycle of underrepresentation. Stop white washing your own damn culture.

That's not the point. The point is that variety is good but there are tons of Indian models. Every media in India tries to be westernized and my point is that it's not the best thing to do. It's not just vogue India but vogue in middle East as well.

However, others have defended the publication’s choice of cover star, arguing that this is a logical step for Vogue India to embrace the Kardashians’ large following.

Yes vogue India should've probably used an Indian model, but if you had the chance to get Kim Kardashian on your cover you'd snap at the opportunity.

Some stated that Kim Kardashian cover was iconic.

I’m Indian! And Kim you killed it in a Lengha! Ignore all the hate! Thanks for representing my culture beautifully girl 😍😘

Some also pointed out the amount of times Vogue India has put an Indian model or celebrity on its cover and argued that the Kim KW cover was balance on the publication’s part.

To all those who say Vogue India doesn’t select Indian women as cover girls, please google Vogue India before making a mountain out of a molehill.#VogueIndia#KimKardashian@VOGUEIndiapic.twitter.com/kuJa3WNTcp

Where do you stand on the debate? Let us know in the comments below.