It is true of life that opportunities wait for us around every corner. The unexpected is what keeps our eyes open and our hearts full of vigor, what enables us to bear through difficulties and grow stronger from them. And when these opportunities find you, you must chase them swiftly and absorb all that you can from them.

One such opportunity found me this January. I never expected that I would be so blessed to share my works with the people of Beijing, premiering my most ambitious exhibition to date at the Today Art Museum. Last month's debut of Wonderland was among the highlights of my career as an artist, and it is a memory I will treasure with my life's brightest moments.

It has been a tremendous honour to find myself working with Peng Feng, professor at Peking University School of Art and exhibition curator; he was an essential force in bringing Wonderland into fruition. With his permission, I am pleased to present his essay on Wonderland and its place in an increasingly globalised art world.

"Flowers From A Distance"

On invitation, I attended the 55th Venice Biennale at the end of May this year. Just at the point when I was beginning to feel disappointed by the scarcity of good work, Ana Tzarev's solo show at the Museo Diocesano di Venezia reignited my long-lost enthusiasm for art. From my perspective - that of the "Other" hailing from the far east - Ana's works brought to life everything my imagination had once dreamed Venice might be.

Ana's artistic success is not entirely rooted in Europe. Though she was born in Croatia and received excellent training there, it was after she moved to New Zealand in particular and integrated Eastern culture into her work that her career took a real qualitative leap. Ana has a gallery in New York dedicated to showcasing her work, but she chose to put her studio in Phuket, Thailand, where she spends much of her time every year living and creating.

Ever since I saw Ana's work at the Venice Biennale, I have had one question on my mind: why are her depictions of the West so true to the way someone from the East might imagine it? From an orthodox perspective, the "accuracy" of Ana's work pales in comparison to that of artists who have lived their whole lives in the centers of Europe. But in the eyes of an Easterner, Ana's work seems much more "European." How could this be? Could it be that distance plays a role? Psychologist Edward Bullough once used the concept of "psychical distance" to interpret aesthetic experience, believing that only from a psychical distance neither too close nor too far away could a viewer appreciate the beauty of a given object. Sinologist François Jullien, too, has acknowledged that in order to discern the defining characteristics of European culture, one needs a certain distance from it - and he believes far-away China provides precisely that. Perhaps one of the reasons Ana's works possess such a "European" quality is the "distance" she has maintained from Europe. Maybe this is what lends her works a clearer understanding of their subject matter.

What interests me, however, are the responses Ana's works will garner in Beijing. Will viewers here notice the Eastern elements in her art? Anyone familiar with Chinese art history knows that Chinese painters like to paint flowers. Bird-and-flower painting, or huaniao hua, is a Chinese painting genre whose art historical importance parallels that of portrait or landscape. The Xuanhe Huapu, a treatise on painting written nearly 900 years ago during the Xuanhe reign of Song Emperor Huizong, not only lists the most renowned bird-and-flower painters in Chinese history at that time but also provides theoretical explanations of painters' affinity for the tradition. First, it cites epistemological reasons: bird-and-flower paintings helped people understand the plants and animals. By observing changes in plants and animals people could better grasp the changes of the seasons, a vital necessity for an agricultural society. Second, the treatise cites ethical reasons: people imbued birds and flowers with moral qualities, or used birds and flowers to symbolize certain moral values, for the purposes of self-cultivation and social enlightenment. Third, the metaphysical reasons: people in ancient China believed that everything in the universe was the product of the meeting and parting of Qi. In their observations of the plants, trees, flowers, animals, fish and birds, they were able to share in Nature's primordial Qi and feel they were themselves a part of the greater I of the universe. It is for these reasons that Chinese painters were so absorbed by their devotion to paint flowers and birds, seemingly inconspicuous subjects when juxtaposed with, say, magnificent architecture. So what relationship do Ana's flower paintings have to these considerations of classical Chinese painterly aesthetics?

Ana's exhibition at the Today Art Museum provides us with an opportunity to explore these questions. Alongside her iconic, large-scale "Love & Peace" flower sculptures and paintings, we find her most recent creation, a series of paintings titled "Wonderland." In this series there are not only flowers, but trees and cranes. The crane is an especially significant theme in Chinese painting. Compared with her earlier works, which feature single large flower blossoms, Ana's recent compositions combine flowers, trees and birds in a manner more closely approaching traditional Chinese bird-and-flower paintings. The paintings evoke associations to early Chinese mural paintings, or to drawings like those found in Shanhai Jing, the Classic of Mountains and Seas. It is my belief that upon viewing the exhibition, audiences will have a similar experience to my own - observing, as I have, that these works possess something distinctly Chinese. Ana does not have the conceit of those Sinologists who boast of having a more accurate understanding of Chinese culture than even the most native of native Chinese scholars. And yet, her at-a-distance vantage point does reveal to us some of the characteristics that make Chinese art unique. I believe that with the help of Ana's works, the audience will find its way back to China's long standing bird-and-flower painting tradition, and in turn link her paintings to it. 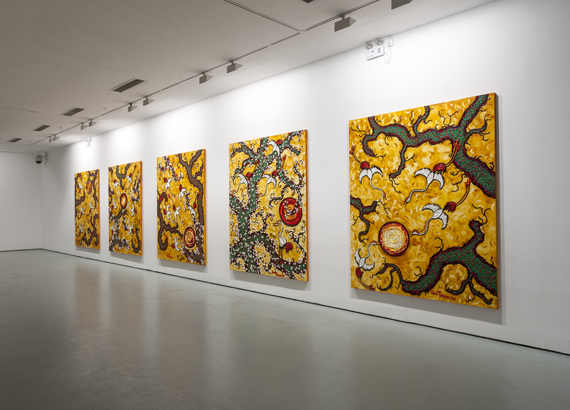 Selections from Wonderland series of paintings.

Ana found the West when she left the West. And when she returned to the West, she found the East. Her process of discovery underscores the role of distance in recognition. Distance is helpful not only with regard to self-awareness, but also with regard to recognizing ourselves in the Other. What I want to emphasize here is that Ana's ability ultimately to maintain simultaneous distance in her contemplations of both East and West results in the disappearance of distance at all between the two. Indeed, Ana's works transcend difference not just between East and West, but between all cultures. In this sense, her art is a new kind of art for the globalized era, and appreciation of this new art form is not subject to cultural restrictions. That is why her exhibitions have so deeply touched audiences on all continents.

There is no better choice than flowers as subject matter for work that aims to transcend cross-cultural boundaries. Flowers are a product of nature. Their beauty has a kind of universal power that surpasses individual cultures. Ana uses flowers and passion, love and peace to break down cultural barriers and to herald the advent of a new culture adapted to the globalized age.

Peng Feng, Ph.D., is a professor at Peking University School of Art and director of the school's Department of Art Theory. He is an executive member of the International Association of Aesthetics; an active contemporary aesthetician, critic, curator, and playwright; and served as the curator of the China Pavilion at the 54th Venice Biennale.