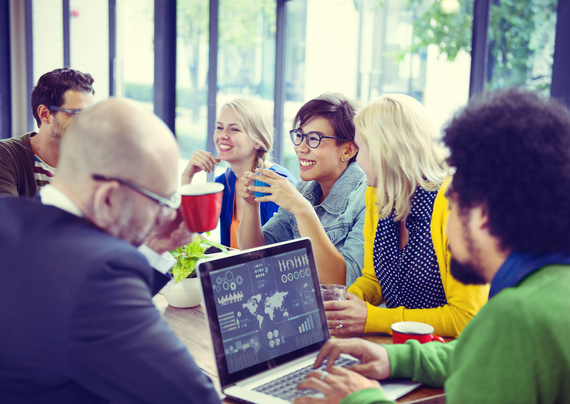 Enter the office chat app, aka the "enterprise social network". These apps allow teams to both collaborate in open forums or just casually talk or catch up in private messages, taking away the need for time-killing 'catch-up' meetings. These apps are also great at keeping global teams in touch.

Here are the best chat apps to keep your office in sync.

Amid much fanfare, the Facebook for Work app was released at the beginning of this year for both iOS and Android devices. It is hoped to combat the pandemic of people using Facebook at work. It's still early days for the app, which has not set a firm policy on either pricing or privacy, yet. What it does do which a lot of other apps don't is give you detailed profiles for each employee with the idea being that a manager can use the app to find the right person for the job; or they can post about it on what amounts to a business' personal Facebook feed. The apps also provides a simple messaging feature as well à la the usual Facebook.

Slack claims to be changing the way teams communicate, and looking at  testimonials, it appears to do just that.  The desktop and mobile allows teams to chat in channels with conversations divided by subjects, and you can chat and share photos, videos and music. So it's a bit like having an ongoing meeting which you can dip in and out of. Slack is free to download, with Standard, Plus and Enterprise ($49-99/month) options with enhanced features, like Google apps integration and usage stats.

Arguably one of the best features of chat champion Whatsapp is that it allows you to conduct conversations using your voice - in easy-to-make recordings - rather than just texting. The mobile app Voxer brings that feature to the office. It describes this as a "push-to-talk" feature, which is then stored in delivered and stored in the cloud. It allows you call colleagues with a tap of their icon on the app, as well as selling walkie-talkies (I know, remember those?) for when you need it hands-free. It syncs across devices and is available in all apps stores. Some users have flagged up possible issues, like being a battery killer.

Although not pretty or pumped full of features, Instantbird is easy-to-use and customizable. It works as an add-on to Mozilla's firefox. The real beauty of Instantbird is its customizability, like themes, emoticons, plus those on the Add-on website, with which you can set the app in just the way you like it. This might be a little more work than you intended, and positive reviews of the app have been skewed toward the technophile side. This app therefore could be a dream come true for a team or developers; less so one for, say, artisanal coffee makers.

Microsoft-owned Yammer has more of the feel of a social network than a chat app. You can post - ideally work-related things - and colleagues can like or reply to a post. It fact, it looks quite a bit like the newly released Facebook at Work app. Prices for the Yammer start at $3/month, and features include mobile sync and language support in 25 languages, which goes some way toward separating it from the crowd of similar apps.

Pie is a web and mobile app which uses your work email as a login. Once a businesses sign up, teams can login whenever they like. Chats are divided by categories, and the app is available free on browser and mobile. In terms of looks, it's a bit like Whatapp's more colorful siblings Line or WeChat, which is handy if you're talking about something as banal as accounts or bug fixes.

Here, as in many other places, Google benefits from its ubiquity. Gmail (email), Drive (cloud) and Hangouts (conferencing) all have chat functionality, and allows you to collaborate directly on tasks, like writing documents or setting up spreadsheets. Pricing begins at $5 per user per year. Other google apps in the package include Slides, Google+ and Calendar. In other words, the offer is more extensive but, perhaps as a result, not as targeted as apps like Slack.

Is email dead? Inside the office it could be. So, what are you waiting for? Get collaborating.