So, Americans eat a lot of cheese. Just how serious is our love affair? Researchers at the Modern Farmer say America's cheese consumption has tripled over the past 40 years. That means each person in America now eats about 25 pounds a year. Collectively, we eat nearly eight billion pounds, or four million tons, of cheese a year. If the Titanic weighed 52,310 tons...

The most popular type of cheese is mozzarella. Researchers concluded that this could be due to the high consumption of one of America's favorite meals: Pizza. You may be surprised at just how much pizza and other popular foods this country inhales on a daily basis. Behold, the 11 most-consumed foods in America, along with an estimated amount of just how much we eat of each one every year.

How would you react if you met someone who had never tried Coke? We think it's safe to say that just about everyone has sipped the sweet and bubbly caramel-colored soda that 94 percent of the world's population recognizes. Here's some (kinda) good news though: Results from an Associated Press report published in 2013 say that the average American drinks 44 gallons of soda a year -- that's down from 58 gallons in 1998! But, then again, take into consideration that 44 gallons is the equivalent to the amount this aquarium holds: 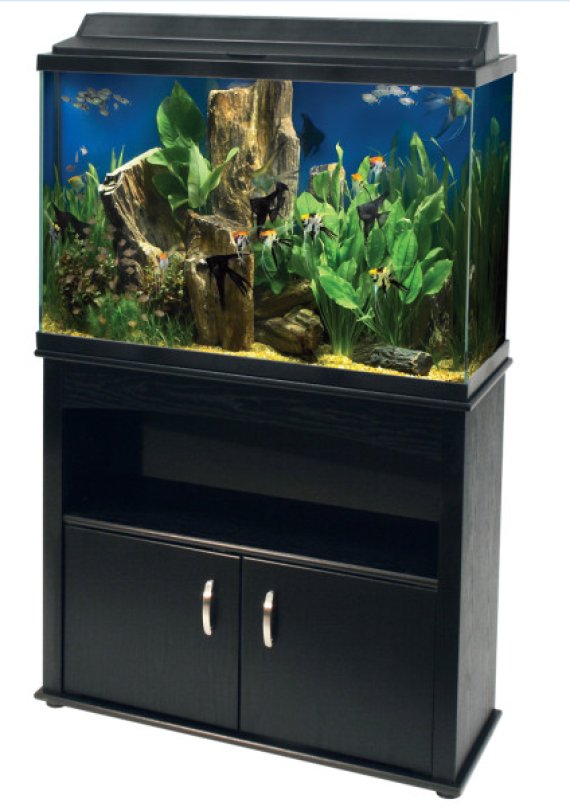 2. Hamburgers = 50 billion per year (three burgers a week per person)

Whether you put cheese, mayo, mustard, or yes, an egg, on your burger, we all love and adore these meat sandwiches. Burgers account for 40 percent of all sandwiches sold nationally.

Which are your favorite french fries? They're probably at McDonald's. A 2010 poll conducted by Brand Keys' Customer Loyalty found that the massive fast food chain's fries take the top billing. So, it makes sense that McDonald's restaurants purchase seven percent of the world's potato crops. Second place on the fry popularity poll went to Arby's.

4. Hot dogs = 7 billion just during the summer season, from Memorial Day to Labor Day (21 per person)

According to a study by the National Sausage and Hot Dog Council, of those summer hot dogs, Americans will eat 150 million hot dogs on the Fourth of July alone. Also, people in California seem to eat the most hot dogs: In 2012, residents in Los Angeles ate more than 95 million of them. But, the east coast fires back with the fact that Washington D.C. customers buy more 7-11 hot dogs than any other city.

You can thank Robert C. Baker, a professor of food science and poultry, for the invention of this little chicken snack, when he processed and binded chicken and called them "nuggets." McDonald's popularized the wonderful food in the 1980's (at first, made of minced chicken and other fillers and preservatives). Today, McDonald's claims their Chicken McNuggets are made of all white meat.

A survey conducted by Maple Leaf Foods found that 23 percent of people wondered "if my partner loves bacon more than me." That's some serious bacon love.

In the United States, 344,700 donuts are produced a week -- that means more than 10 billion donuts are made every year. And if you live in Boston, you may find yourself eating more than the average American -- your city has the most donut shops per a person: 250 stores, or one per every 2,480 people.

Oreos are America's absolute favorite store-bought cookie. Since its introduction in 1912, the company has sold about 490 billion cookies. That's enough cookies to circle around the Earth 381 times. The snack is 71 percent cookie and 29 percent cream. And while the original seems to be the most popular, multiple flavors and variations have sprung up. In fact, "Cookie Dough" and "Marshmallow Crispy" flavors were released this month.

California is the nation's top ice cream provider, churning out over 142 million gallons a year. In a survey conducted by the California Milk Advisory Board, it was discovered that 64 percent of consumers nationwide report that they eat ice cream in front of the TV or on the couch, with women being more likely to eat ice cream in bed. And here's a tip to prevent your precious ice cream from dripping out of the bottom of your soggy cone: Drop a mini marshmallow in the bottom of the cone before scooping the ice cream into it. A little extra sugar never hurt anyone.

Last but certainly not least, pizza reigns as America's ultimate favorite food. Let's put this into perspective: Americans eat approximately 100 acres of pizza a day, which means 350 slices per second. Basically, almost every American loves pizza, with 93 percent of Americans eating at least one slice of pizza per month. More Americans prefer meat toppings to vegetable toppings and Saturday night is the most popular night to eat it. Also, Dominos is the world leader in delivery, with drivers expected to log about four million miles this Superbowl Sunday.

Why The 'Dry Scooping' Trend Is Never A Good Idea