PHOENIX, Arizona -- The second juror in two days has been excused from the Jodi Arias penalty retrial.

Judge Sherry Stephens excused juror No. 9 Wednesday, after journalist and legal analyst Beth Karas told the judge she was approached outside the courtroom by the juror.

Testifying outside the jury's presence, Karas told the judge that juror No. 9, an unidentified female, came up to her during the morning break.

Karas told the judge the juror was not wearing her juror badge, which jurors are required to have on at all times at the courthouse.

Court was recessed for lunch after Karas testified. When court resumed, Stephens announced the juror's dismissal.

"Ladies and gentleman, I have excused juror No. 9," the judge said. "She will no longer be a part of this jury."

On Tuesday, the first day of the penalty retrial, another juror was dismissed due to an ongoing family emergency.

Wednesday's dismissal leaves a panel of 16 -- 12 jurors plus four alternates -- to decide whether Arias will be sentenced to life imprisonment or death in the 2008 slaying of her ex-boyfriend, Travis Alexander.

Earlier Wednesday, the jury heard gruesome details about the violent killing of Alexander during testimony by Dr. Kevin Horn, of the Maricopa County Medical Examiner's office.

The body of 30-year-old Alexander was found on June 9, 2008, in a pool of blood in the shower of his Mesa apartment by friends. In 2013, a jury found Arias guilty of first-degree murder but was deadlocked during the sentencing phase, prompting the penalty retrial now in progress.

As bereaved family members sat with their head down in the courtroom, Horn testified in graphic detail about the brutal attack that resulted in Alexander's death on June 4, 2008.

Horn described how Alexander was stabbed 27 times, shot in the right brow with a .25-caliber gun, and nearly decapitated when his throat, voice box and arteries were cut.

As Horn spoke, jurors looked at photos of the dead Arizona man whose body, Horn said, was decomposing and starting to mummify when the autopsy was conducted on June 12, 2008.

Arias looked away from the courtroom monitors as the post-mortem photos were shown to the jury.

Horn testified the injury to Alexander's throat, which he described as a "single cut across the neck," would have been "rapidly fatal."

"The knife injuries I believe came before the gunshot wound," Horn testified. 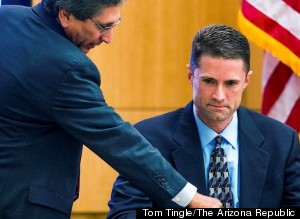 While questioning Horn, prosecutor Juan Martinez shocked courtroom watchers when, without warning, he walked up to Horn, grabbed his pen, and pretended to stab him. Martinez then asked Horn how long that action took, prompting an immediate objection by the defense.

Following a brief sidebar, the judge told Martinez he must notify the court before approaching a witness.

Martinez then asked Horn if it is difficult to be stabbed, to which Horn replied, "I don't stab people."

When Horn stepped down, Martinez called Nathan Mendes to the stand.

A Special Agent with the U.S. Department of the Interior, Mendes was a Siskiyou County Sheriff's Detective when Arias was arrested in July 2008. 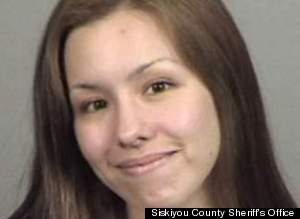 Mendes testified about Aria's infamous smiling mug shot and her demeanor the day of her arrest.

"She looked up at the correctional officers that were booking her and asked if her hair was okay," Mendes testified.

He added, "The whole thing was odd, including the [mug shot] photo ... Most people who take a booking photo don't take a really nice photograph and she was grinning."

Mendes then went on to detail a trail of credit card receipts found in Arias' possession, which detailed her trip from California to Utah and Nevada, in the days leading up to and after Alexander's slaying. Mendes said there were no receipts from Arizona, suggesting Arias had attempted to hide her visit there.

Shortly thereafter, court was recessed for the day.

The retrial is scheduled to begin again Thursday at 12:30 p.m. Eastern time.

The Huffington Post is inside the courthouse and live blogging from gavel to gavel. Check back here for updates.