The first thing to know about "Lena NW" is that, like most of her generation, she grew up on the Internet.

It's important to note because most of Lena's artwork has some element reflecting the hyper-connected world and the way the web helps the most controversial and sometimes disturbing parts of society have more exposure than ever before.

Warning: This story contains content and images that may be offensive to some readers.

"The Internet's becoming a reservoir of human consciousness," said Lena, who prefers to go by her first name due to the controversial nature of her work. "So instead of things like pedophilia that you would have it in this closed, private, secret circle, now it's online and these things are in a public sphere. You have things that exist that couldn't express themselves in the public before that are now technically public."

Lena is a student with an arsenal of talent: She did all the coding for a flashgame site called "Fuck Everything" where the user runs through a gendered protocol to try and have sex with a girl, a comment on video games often catering to male desires, and wrote a 70-page thesis to accompany it. She's written several short stories, and she draws, paints, creates comics and designs on a computer. She's also made more than half a dozen music videos for original hip-hop songs she penned under the rap name Fellatia Geisha. The videos don't include nudity, but are full of graphic images nonetheless.

"I've been pegged with the word insensitivity," Lena said. "It's just how I've been sensitized and the tone I chose to address it."

Lena's work coincides with an ever-growing chorus of students and activists nationwide speaking out against what they describe as rape culture on college campuses, just as policymakers and the federal government have increased scrutiny of how universities handle sexual assault and harassment cases. Her music is not unlike major contemporary hip hop artists like Tyler, The Creator and Eminem, and while her art is graphic, that too has gained an audience through oddballanimation appearing on outlets like Adult Swim. Except part of what makes Lena's work unique is a constant theme of utilizing feminist theories to address current issues like sexual assault and street harassment.

Lena is a senior at Florida State University. The school's football team has a loyal and fervent fan base, but FSU has also been accused of mishandling a rape claim against its star quarterback, Jameis Winston, who was cleared in a campus hearing last month. (FSU has defended its actions, and is the subject of a federal lawsuit and investigation into the matter.) 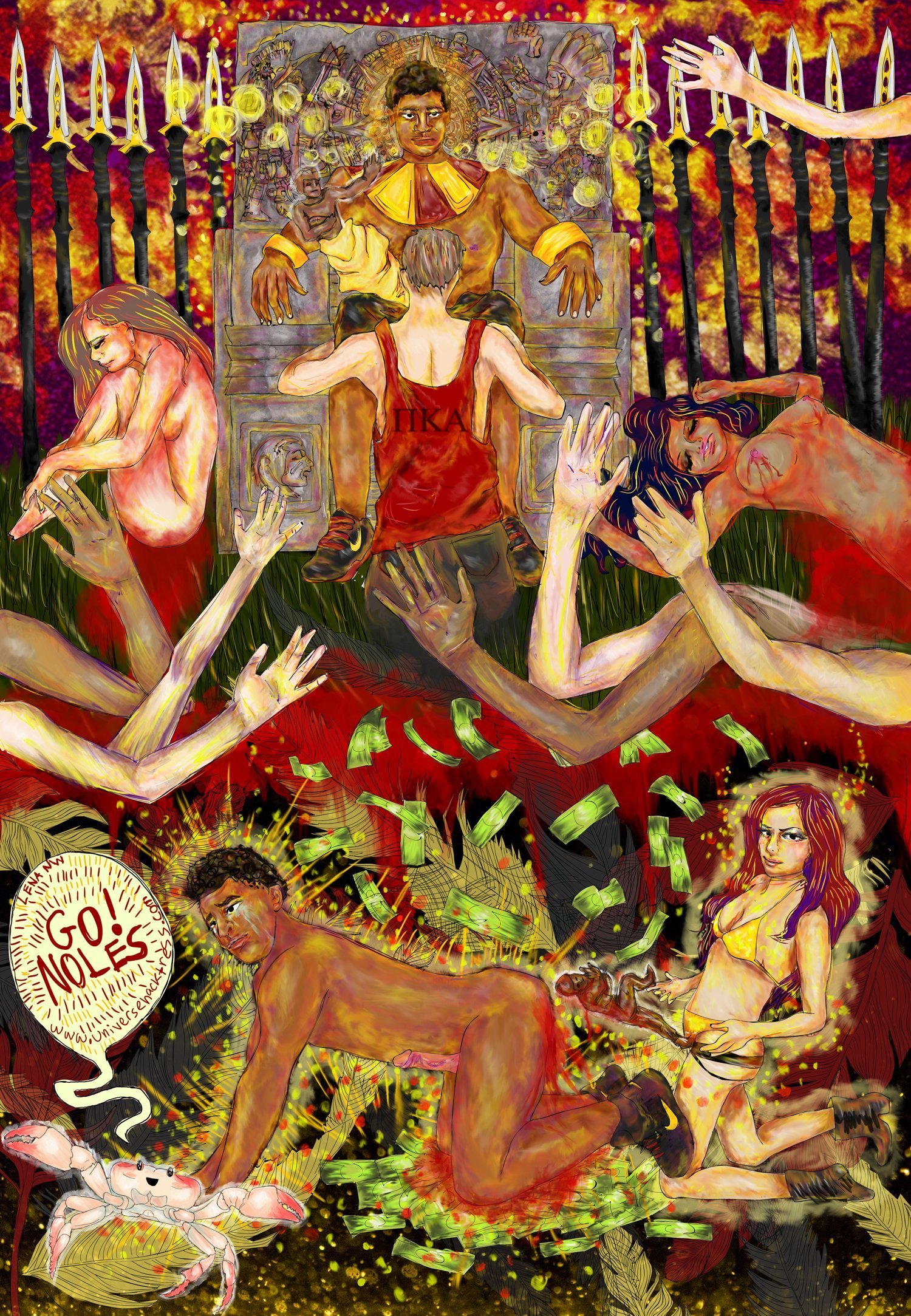 But Lena's work is much broader than critiquing Winston and the FSU football culture. A digital media art major, she has focused nearly all of her art since entering college in 2010 on addressing rape culture and issues women face in a traditionally male-dominated world.

"I am just quoting extremism and how popular it actually is," Lena said, explaining that shock media is closer to the consumer than they realize today because of the Internet. "These things people used to have to seek out." 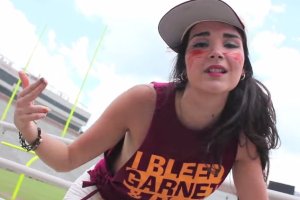 Lena received funding as a sophomore in 2013 through FSU's Undergraduate Research and Creative Activity Award to create her web comics exploring Internet and rape culture and gendered double-standards. Carrie Ann Baade, a professor of painting at FSU, supervised the grant work.

What Baade said she's tried to do with Lena is understand Lena's motivation for her art, and help her find some direction and provide context from a historical perspective. But at the same time, Baade said she had to grow to understand what's unique to Lena's generation.

"As a professor, we're all having to meet this generation and accept them for who they are, and understand what it's like to have an identity that's really quite virtual," Baade said. "[Lena is] addressing a lot of experiences she had growing up on online sex chat rooms and having an avatar, and not feeling as powerless as women did in the past. She has a lot of sexual ferocity."

Lena conceded Baade's point about sometimes needing to identify the meaning behind her work.

"A lot of it is impulsive," she said. "I have to think critically why I did it."

Lena said she frequently shows images of menstruation in her art, as a way to draw attention to the idea put forward by feminist theorist Barbara Creed that men have traditionally made feminine functions like menstruation and childbirth taboo.

Though she has a strong voice, Lena said some critiques of her work stay with her. Things like: "Some other feminist saying you're portraying feminism as man-hating with this painting of a severed dick."

But, she adds, "In art, there's this understanding that it's separate from reality. ... People definitely read into things a lot."

One of Lena's collegiate works, a 40-page comic titled "Maybe She Likes It," features nudity on every page and touches on several issues, including the depiction of teen models, drug use and body image. The 70-page thesis she submitted with her comic was supposed to only be 10 pages, Baade said, but Lena decided to do additional research and add to it. Lena also turned in her anime and manga-inspired flashgame, "Fuck Everything," to add to the work.

Baade said that her husband played the flashgame site for several hours, but finally declared, "I can't win."

Lena responded that that was the point.

Today, Baade said, Lena easily has the largest body of work of any undergraduate she's encountered in 14 years of teaching, but is one of the most well-rested students as well. Lena produces material quickly when an idea hits her.

Within a day of 22-year-old Elliot Rodgers shooting and killing students, including himself, at the University of California, Santa Barbara, she posted a response video. It mocked Rodger's manifesto decrying women he found attractive who shunned him. In Lena's version, she appropriated Elliot's words and rephrased them to focus on rape culture and street harassment.

Lena said a lot of her inspiration comes from the college social scene, which she described as "a weird environment with clear gender roles" she hadn't experienced before coming to campus.

"It's strange to see how people talk to you as a girl," Lena said. "It's more prevalent at frats, but also just going out to parties and clubs for the first time. You become hyper-aware of these sexualized gender roles. The attitude is like, there's no reason to talk to someone of the opposite sex unless you want to have sex with them."

Although her music videos may give the appearance she's a fixture at wild campus parties, she said that isn't accurate in reality.

"Freshman year I went out a lot, but I've had less and less time as I become more involved," Lena said.

"I used to go to house parties a lot, I used to be cool," she added with a laugh, before explaining, "I start having anxiety that I should be working. I try to take those experiences and try to make them productive."

If Lena's at a party these days, it's likely because she's performing.

Her first recollection of rapping was when she was in fourth grade, and she made her first recording at 16. College is when she started making music videos, she said. She put her first video, "Lact8n n H8n" online in 2012. In 2013's "Split Lip," she talks about getting death threats due to her videos. A viewer may easily get hung up on the visuals of Lena being covered in paint or ketchup, or cheaply animated sea creatures humping, and miss the references to people being obsessed with "going viral" online. 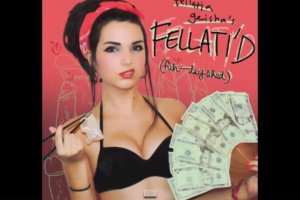 "You can be famous on Tumblr for taking a bunch of selfies of yourself -- you can commodify the self," Lena said. "Now more people can be famous, and sell ad revenue to your blog. I see it as a big motivator in our generation to blow up on YouTube. Lots of people are obsessed with making something and being discovered."

Ray Benton, a 28-year-old producer and songwriter in Tallahassee who's worked with Lena, said he was taken aback when he first saw how explicit her lyrics are.

"It's her creative outlet, I respect it from that approach," Benton said. "She stands out -- first of all, for the obvious she's Caucasian. She's petite. Her content is over the top, so she definitely stands out. But some of the things she's done for me -- she's done artwork and stuff for me on the side -- her artistic abilities stand out." (Lena's actually also part Latina.)

While Benton said he wouldn't necessarily share Lena's music with his parents, he noted there are plenty of people who respond to it as being "crazy in a good way."

Lena is now entering her final semester in college, and she's unsure what her plans are after that.

"If I could get hired to be part of a creative production team, one that does some pretty weird, progressive content -- that would be a dream job, to make what I want and make money doing it," she said. "Right now, it's just project by project, and trying to find a job."

Baade is hopeful for Lena's prospects. "This is one student who really is trying to keep her finger on the pulse, [and provide] an incredibly courageous female response. I really hope I get more students like her," she said.