When Bobbie Duncan was accidentally outed on Facebook in college, she battled depression, family problems and even attempted suicide. She joined HuffPost Live to share her story of being forced out of the closet.

"I joined the queer chorus at UT, and I got added to the Facebook group, which overrode all of my privacy settings and then posted it to everybody's wall. My family found out that I was gay that way," she explained to host Nancy Redd.

Her accidental outing caused many problems for Duncan. "My dad just absolutely freaked out, and I don't really have a great relationship with him at all anymore. I was super depressed. I tried to kill myself, which I hate to admit on live news, but [it] is something that happened and does happen sometimes when you suddenly have to face this big scary thing and you don't know what's going to happen."

"It's not how I would have chosen to come out because I wasn't ready and I didn't know who I even really was yet." 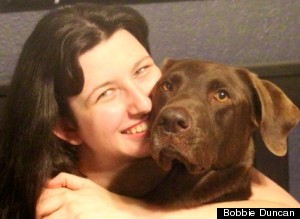 Despite her traumatic outing, Duncan has rebounded and is now engaged.

"It's been a few years now, and I couldn't be happier about being out. I'm getting married and my life has come back together. But it's only come back together because I survived all of the things that happened after it fell apart."