On the 70th anniversary of the liberation of Auschwitz-Birkenau, the Huffington Post UK is running a series of pieces looking at how we remember the Holocaust: The victims and perpetrators and the untold stories, on what's likely to be one of the last major commemorations with living survivors.

One of the UK's foremost Holocaust scholars has warned of the danger of "hysteria" over racism in Europe and decried references to the 1930s, on the eve of the 70th anniversary of the liberation of Auschwitz-Birkenau.

Writing for Huffington Post UK as the country prepares to mark Holocaust Memorial Day, David Cesarani, the Royal Holloway professor and author of 15 books on anti-Semitism and the Holocaust, called the furore in the past weeks "deeply regrettable".

"There is no ‘wave’ of anti-Semitism," he said. "Rather there are a set of discrete phenomena that are being gathered under one umbrella term, the meaning of which is now being strained to breaking point."

Jewish men walk along the street in the Stamford Hill area

He called the media's coverage of the "exodus" of Jews leaving the UK and France in the wake of the killings at a kosher supermarket in Paris "preposterous".

Last week it was reported that just over 50% of British Jews feared they had no future in the UK, while 25% said they have considered leaving the country because of anti-Semitism, in a survey by the Campaign Against Antisemitism widely perceived as being methodologically questionable. 56% felt that anti-Semitism now echoes the 1930s.

But growing fears that British Jews would be likely targets of any forthcoming terror attack by extreme Islamists was enough to ensure that the Home Secretary Theresa May personally visited a meeting of the Board of Deputies of British Jews on a Sunday morning.

"I never thought I would see the day when members of the Jewish community... would say they were fearful of remaining in the United Kingdom," she told the assembled gathering, holding a sign that said 'Je Suis Juif' [I Am Jewish].

Police announced they will increase patrols in areas with large Jewish communities such as London and Manchester in response to the Paris attacks. The safety of other minority communities, including Muslims, and the protection of police officers deliberately targeted by extremists, is also being reviewed.

Cesarani pointed to the solidarity with the Jewish community shown by politicians as an indication that commentators should not make false comparisons. "There is a real threat to life and limb, however, from a tiny number of Jihadists and extreme Islamists.

"But they are a threat to every liberal democratic society and they target the state, the police, the military and, as we saw in France, organisations that practice and symbolise freedom of expression.

"Hence Jews are not isolated, as they were in the 1930s and 1940s, but find themselves enjoying unprecedented solidarity. This comes, too, from Muslims who are struggling against the extremism in their own faith communities. We need to celebrate and build on this solidarity, not sow seeds of alarm."

Flowers in front of the Hyper Cacher kosher supermarket after hostage-taking by a jihadist gunman left four dead, the sign praises the police for their courage

In the wake of several anti-Semitic incidents in France and mainland Europe, including the Charlie Hebdo-linked killings, the murders at a Jewish museum in Belgium, and the shooting of Jewish schoolchildren and a rabbi outside a school in Toulouse, emigration is on the up, with a record 5,000 Jews leaving France last year.

In July last year, Natan Sharansky, chairman of the Jewish Agency for Israel and the country's former deputy prime minister, told HuffPost UK that a new wave of European Jewish immigrants were fleeing to Israel, mainly due to anti-Semitism, and that European Jewry's days are numbered: "The way things are developing in Europe, Jews will increasingly start to feel there is no future there. The number of French Jews leaving is very symbolic."

But Cesarani said the significance of those figures should not be over-stated. "The uptick in Jewish emigration from France, under 5,000 out of a population of 500,000 is negligible and has economic roots, too," he said. "The current press hyperbole shows not only ignorance about what the situation was like 70-80 years ago, but what it was like 25-30 years ago.

"Hence, invoking the fate of the Jews under Nazi rule is not only inappropriate - it is inflammatory and insulting to the victims."

John Mann MP, Chairman of the All-Party Parliamentary Group Against Antisemitism told HuffPost UK he thought Holocaust Memorial Day was an appropriate time to reflect on modern anti-Semitism. "It has been a difficult time for the Jewish community in recent weeks and many will have felt the cold chill of antisemitism in Europe," he said. "As we move towards Holocaust Memorial Day, it is important to reflect on the reasons that we must continue to meet the challenge of anti-Semitism head on and without reprieve.

"At this time of reflection and memorial it is important that we also look forward and reassure the Jewish community and others that it will be non-Jews, across the parliamentary parties that will ensure that 'Never Again' is not just a mantra but a living reality."

For decades, it seemed barely conceivable that resentment or even hatred against a religious minority could arise again in Germany 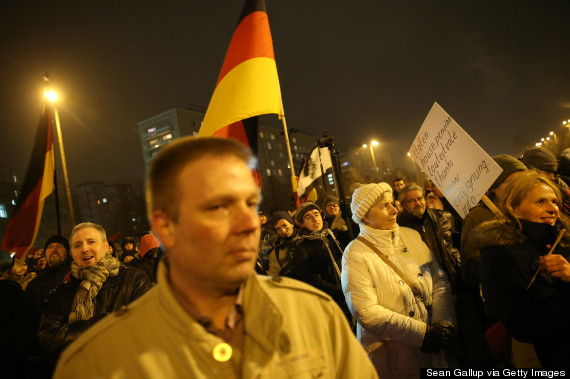 It is not only in Britain where the anniversary has come at a time of national soul-searching over intolerance and religious hatred. In Germany the Pegida movement manages to mobilize tens of thousands in resentment against immigrants. On the evening of January 12 in Dresden, about 25,000 people demonstrated against the "Islamisation of the West". It was the largest xenophobic demonstration in the 65-year history of the Federal Republic.

Among non-Muslims in Germany, Islamophobia is now the majority feeling. According to a study by the Bertelsmann Foundation, 57 percent of non-Muslim Germans regard Islam as a threat. The most fearful fear is in East Germany, where the fewest Muslims live.

For decades, it seemed barely conceivable that resentment or even hatred against a religious minority could arise again in Germany. Students have been frequently and forcefully confronted with the horror that brought their parents and grandparents on Germany.

But it did not stop with the presentation of the horrific images of the liberated concentration camps. Generations of German students have read enlightening books in the classroom, about the emergence of xenophobia and racial fanaticism - such as "The Wave" by Morton Rhue or "When Hitler Stole Pink Rabbit" by Judith Kerr. Some have understood what these books were talking about. Others apparently not.

It is no coincidence that this downturn coincided with the death of the last prominent witnesses, including, Marcel Reich-Ranicki, probably the most influential literary critic of the post-war period. As a young man, he survived the Warsaw Ghetto. Or Ralph Giordano, a very popular writer in the 80s and 90s. He survived the war hiding in the basement of a family in Hamburg.

In Germany too there is a new 'anti-Semitism'. This was evident during the protests against the air strikes in the Gaza Strip half a year ago. In Essen, the post-communist Left Party called for a demonstration against Israeli actions. As well as party supporters, many Muslims also attended. The Israelis were reviled as 'baby killers - and the only reason the crowd didn't chant more hateful slogans was because the police forbade it.

The Bild-Zeitung newspaper reprinted a call for solidarity with Israel. The editors received deaths threats on Facebook from people who also said Israelis should be "gassed". Most of the commentators were of German descent. They often talked of "drawing a line" under the Holocaust debate in Germany.

The right-wing populist party AfD drew on rhetoric about "drawing a line" during the elections for the Saxony legislative assembly. The party advocated ending the "fixation" on the Holocaust in the teaching of history. After the elections, the anti-Semitic undertones in political discourse were hard to miss.

Against this background, the Chairman of the Central Council of Jews in Germany, Josef Schuster, gave a remarkable interview just before Christmas to 'Die Welt'. When asked about the Pegida protests, he defended Muslims, saying that the fear of Islamic terrorism was being used to denigrate an entire religion.

The Pegida movement is currently at a crossroads: Founder and leader Lutz Bachmann was forced to resign after calling asylum seekers as "scumbags" on Facebook and posed with a crown and moustache as "Hitler".

But even if Pegida's demonstrations get smaller, their ideas are still in the mind. All Pegida did was make the hate visible.

10 'Harmless' Nighttime Habits That Are Secretly Ruining Your Sleep