Newsnight has been criticised for gathering a large group of men to discuss sexual harassment and assault.

The men were there as part of an episode dedicated to “The Problem With Men” which focussed on the male perspective on the weight of allegations that have gathered pace and claimed a big scalp in Defence Secretary Michael Fallon, who resigned hours before the programme on Wednesday.

The visual of 12 men facing three women (with another two men behind them) - as well as the things some of them said - appalled many. 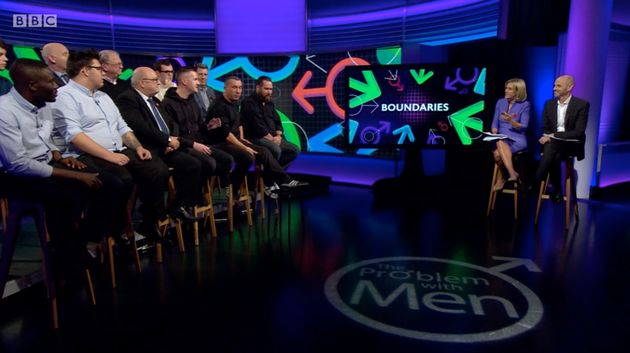 While the younger men tended to emphasise they knew the difference, older men on the panel tended to complain the culture shift had left them unwilling to approach women.

One man said he was “normally a fairly loveable, easy-going kind of character” the revelation had meant “now I wait for women to come to me”.

“They invariably want to kiss me on the cheek and give me a hug,” he stressed.

Another man lamented “this PC (political correctness) has gone to such an extreme these days”.

One younger man even wondered if tapping a female stranger to point out she’d dropped something was sexual harassment.

“Have we lost our common sense?” asked host Emily Maitlis at one point, as one panellist answered: “Absolutely.”

While some speculated it was a remake of spoof current affairs show Brass Eye.

Tonight's #Newsnight really does come across like an episode of #BrassEye. pic.twitter.com/d8aW9Co8Io

Is this Newsnight a late April fool spoof??

Looks like yer da's through to judges' houses. pic.twitter.com/S33RAKwNke

Newsnight showed polling data on what men define as sexual harassment, which prompted one person to say: “I don’t care what men think.”

The Times’ Roger Boyes said programme editor Ian Katz, who has departed for Channel 4, had “left in the nick of time” as the edition was “worse than a sixth form debating society”.

Looks like Ian Katz left @BBCNewsnight in the nick of time. Tonight worse than a sixth form debating society

This cutaway of the women's reactions on #Newsnight tho pic.twitter.com/9B1TcT1G9n

Newsnight’s deputy editor Jess Brammar responded to critics, saying the episode aimed to get mens’ views “rather than repeatedly watch women try to explain these issues and behaviour”.

hiya - the idea was to get men into the studio to discuss this, rather than repeatedly watch women try to explain these issues and behaviour

She added: “We have and will continue to, put women on night after night to talk about their experiences.”

we have, and will continue to, put women on night after night to talk about their experiences. We decided to have an audience of men tonight

Sky News’ Lewis Goodall defended the programme, saying the execution may have been flawed but “at least they’re trying to grapple with big questions”.

#newsnight getting flak for discussing "problem with men." Criticise the execution but at least they're trying to grapple with big questions

The women across from the 12 men were Everyday Sexism project founder Laura Bates, writer Eliza Anyangwe and broadcaster Shelagh Fogarty.

Anyangwe said: “We have framed this discussion entirely inaccurately, this is a conversation about power.... whether or not a male friend touches me on my shoulder is inconsequential.”

Bates said: “12 million women around the world have shared their experiences.

“You won’t find one of them saying ‘I’m outraged someone touched me on the elbow to let me know I’d dropped something’... This is ridiculous. We’re completely reframing the conversation.”

Fogarty, who has alleged she was groped when she worked at Radio Five Live, described the prospect of being touched inappropriately by a man on public transport and said it was “completely alien to me” that she would not speak up about it.