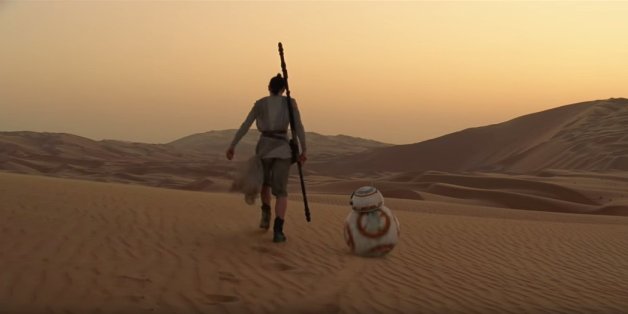 The first proper trailer for Star Wars Episode VII: The Force Awakens came out last night. You might have heard about it.

This 'debut', as it was billed when it premiered on ESPN at 3am last night, (apparently the first two qualify as mere teasers) showed us a lot. We were bombarded us with beautiful cinematography, an intense soundtrack, and a litany of new "ooh what's that?", "that looks awesome" and "the next two months of my life are entirely irrelevant" moments. So let's break down some of the trailer's bigger mysteries...

The opening lines of the trailer - "Who are you?" ... "No one" - pretty obviously signpost Daisy Ridley's Rey being something more than that. She's set for a big future, but maybe there's something significant about her past? We know she's a scavenger, perhaps she's scavenging for something specific...?

Rumours have swirled for a while that she may be a secret Skywalker or Solo. It'd mean each trilogy starting with an adventurous, misanthropic youngster trapped on a desert planet that has nothing for them, but let's see what happens.

Quick note: It looks like Rey's being hyped as the key figure of the new trilogy, or at least this film, which would be awesome. Just like All Of Cinema Ever, Star Wars has always been a bit too full of dudes, so let's take a moment to realise how ace it is that we're getting a badass woman front and centre.

We see Han telling Rey and Finn the stories they've heard about the Jedi and the dark side and all that jazz are true. Quite the turnaround for a guy who, in the first film, didn't believe in the Force.

For my money, this is the coolest thread to come out of the trailer and the one that might set much of the tone for the film. While it was the centre of the first trilogy, it looks like the details of the downfall of the Empire is still essentially myth in the Star Wars galaxy. Darth Vader and Luke Skywalker have always been legends to Star Wars fans, now it looks like they're legends in the film's universe as well.

Think about it: Thousands of planets and trillions of people were wholly unaffected by the Galactic Civil War in the first place; even fewer would know the ins and outs and who the key players were... unless there's some kind of Space Twitter.

Fast forward a generation, it's not surprising that no one really knows how it all went down. Which brings us to the next point...

Our villain Kylo Ren's a giant Sith fan boy. He appears to be collecting old Sith artefacts, even shabbily constructing a homemade lightsaber (who hasn't, right?), and speaks about "finishing what Vader started"... but what does he think Vader was trying to achieve?

Like we've already said, you could probably count on one hand the number of people in the galaxy who know about Darth Vader's redemption at the end of Return of the Jedi, so Kylo almost certainly isn't aware of the man Darth Vader truly was. He worships a myth. Perhaps he's in for a rude awakening?

The only way you could make the Death Star more intimidating would be if it was an actual planet. So that's what the First Order have done. According to the Star Wars website, the superweapon we can see on the poster is 'Starkiller Base', "an ice planet converted into a stronghold of the First Order and armed with a fiercely destructive new weapon capable of destroying entire star systems."

I'm confident that JJ Abrams and Empire Strikes Back and Return of the Jedi writer Lawrence Kasdan are too clever to have this just be as simple as Death Star III. It simply can't be the Big Evil here.

Maybe it's a diversion from the real conflict? Or maybe it'll last longer than one film? Personally, I'd like for the planet to overrun and commandeered by the goodies, sparking a moral battle over what to do with it. Disable it, or use it to hold the galaxy to order?

5) OK SERIOUSLY, WHERE IS LUKE?

Correction, this is the coolest part of the trailer. That the hero of the entire series isn't on the poster, isn't revealed in the trailer and is barely mentioned in the marketing clearly means something big.

Luke's not with the gang, so he's clearly off on his own somewhere and up to something. Searching for some MacGuffin with which to awaken the Force? Living in hermitude, hiding his power from the galaxy? Who cares, it just builds up the hype for his final act God-tier, wrecking-everything-around-him Jedi Master spree, right? Right?!

Last thing, then you can go and watch the trailer another dozen times: Trailers these days are losing their mystery. It's getting to the point where you can watch the trailer for a film, see the biggest laughs or biggest 'wow' moments, and decide then if it's worth seeing there and then. I mean,Terminator Genisysgave away its biggest twist in the trailer.

For as much material Lucasfilm and Disney have put out and as much online speculation and theorising there has been, it's still quite hard to pin down exactly what we're going to see from The Force Awakens.

Guess we'll all just have to wait until 17 December. Somehow.

7 Unspoken Job Interview Rules That Everyone Needs To Know

There's No Such Thing As A Dream Job, No One Aspires To Do Labour

Ageing 'Gracefully' Can Be Scary. Here's How To Shift The Narrative

Loved Normal People? Then Conversation With Friends Is About To Be Your New Obsession

Your Ultimate Eurovision Playlist, As Chosen By Legends From The Song Contest

‘Nobody Believed In It’: Loreen Reflects On The Performance That Changed Eurovision 10 Years On

James Corden Praises 'Brave' Harry And Meghan: 'I Have Nothing But Admiration And Respect For Them'

Eurovision Star Sam Ryder: 'My Enthusiasm Is Greater Than My Fear Of The Scoreboard'

Eurovision Returnee Mahmood On His Comeback: 'If You Don’t Take A Risk, You're Already Dead'

Neighbours Boss Reveals Details Of Kylie And Jason's Comeback: 'It Was A Very Moving Experience'

Meghan Markle Gets Name-Checked In Eurovision Entry And Who Needs A Royal Title Anyway?