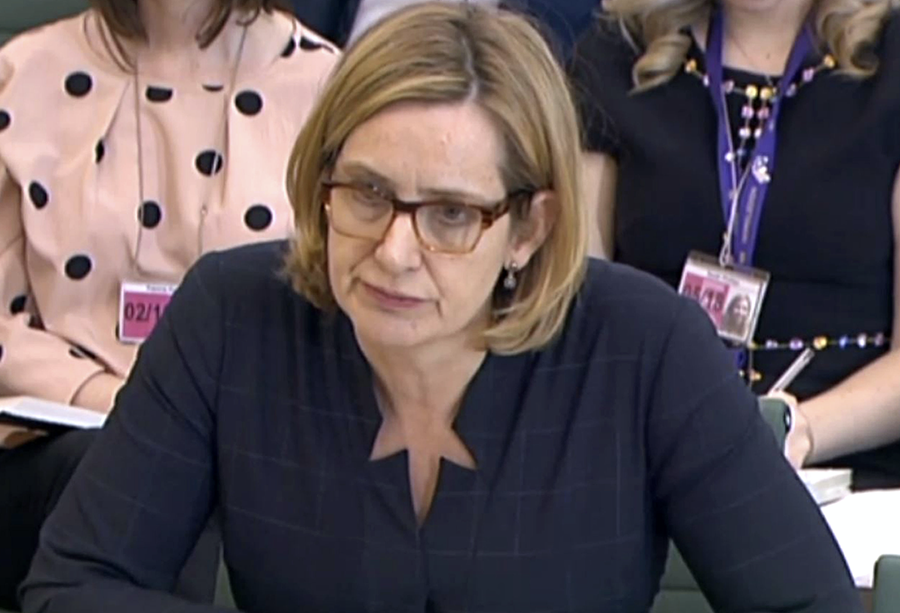 Home Secretary Amber Rudd really struggled through yesterday’s Home Affairs Committee session on Windrush. Given the huge interest in the subject, it was shocking just how little she knew or had been told (or demanded to be told) on basic questions. On immigration staff wanting ‘low hanging fruit’, on numbers detained or threatened with deportation, she seemed like a spectator not a player. Yvette Cooper, whose anger at PMQs powered one of her best ever questions to Theresa May (and she’s asked lots in the last 8 years), was suitably forensic as she chaired the committee hearing.

Yet it was on the issue of targets for removals of illegal immigrants that Rudd is under most pressure today. Asked about regional deportation targets, she had replied ”I’m not sure what shape that might be in…that’s not how we operate…” Her chief immigration official Glynn Williams also told MPs such targets did not exist. Yet this morning it emerged a 2015 report by the independent chief inspector of borders confirmed that targets were set for voluntary departures. Diane Abbott has just been granted an Urgent Question on the topic, which may clash with the Home Secretary’s planned appearance as guest speaker at the Press Gallery lunch. On Today, Cabinet minister Matt Hancock gave the Government line that “it has never been Home Office policy to take decisions arbitrarily to meet a target”. That’s not a denial targets may have existed.

What was perhaps more worrying was the way Rudd just appeared to lack a grip of her department, or an ability to step back and see the bigger picture. She candidly admitted the latter point when asked why she hadn’t seen the pattern of repeated Guardian stories on the issue. The real difficulty for Rudd of course is that she is trying to change the culture set by her boss, one T May. When she said yesterday the Home Office must become ‘more human’, she was asked by John Woodcock which Home Secretary had made the department less human. “I can’t give a clear answer,” she replied. “You could,” he ventured, “but you choose not to, to protect the former incumbent.”

The whole scandal has certainly dented Rudd’s leadership hopes, but the Sun reports how she’s still part of an under-the-radar battle with Michael Gove and Gavin Williamson to build big warchests from donors. Ostensibly, these are funds to help fight their seats, but many seem them as leadership cash. Gove has racked up £31k in nine months, Rudd has £23,500 and Williamson £10k. And in the Telegraph, Nigel Farage has endorsed Jacob Rees-Mogg as the Tories’ best hope as future PM.  The chatter continues.

Judging by his combative New Statesman column, Unite chief Len McCluskey appears not to have read Jeremy Corbyn’s recent letters to the Jewish community, or his Evening Standard column, warning his party not to suggest it is a ‘smear’ on his leadership to raise the issue of anti-semitism. I say ‘appears’, as it could well be that Len has indeed seen Corbyn’s edicts and decided to deliberately flout them. Some may even think he’s been encouraged by parts of the leader’s office. Whatever, his attack on Labour MPs Chris Leslie, Neil Coyle, John Woodcock, Wes Streeting and Ian Austin - for “working overtime trying to present the Labour Party as a morass of misogyny, anti-Semitism and bullying” – has got the headlines he wanted. Crucially, the Unite boss talks about the need to hold MPs ‘to account’ and mandatory reselection, an issue that is the ticking timebomb in the party that may explode before the next election.

After this week’s meeting with Jewish groups, a Labour spokesman stressed yesterday the leader’s willingness to tackle anti-semitism and uphold the agreed international definition of it. Yet the spokesman said backbenchers like Chris Williamson could share platforms with those suspended for anti-semitism but not yet finally found guilty of it (like Jackie Walker). Frontbenchers could not share such platforms because the party wanted to send a ‘strong message’ about the issue. Surely if a strong message was needed, all MPs would be told not to appear alongside those suspended?

The sorry state of the party over the issue prompted a withering HuffPost blog yesterday from Labour’s former compliance unit chief Mike Creighton. He says anti-semites should be as relentlessly ejected from the party as Militant was in the 1980s. And he is scathing about Corbyn’s comms and strategy chief Seumas Milne, claiming “It took three conference calls with Seumas Milne and others over several tortuous hours (and John Mann chasing Ken around with a TV crew) to get agreement that Ken Livingstone should be suspended for the allegations of antisemitism made against him.” Creighton makes a wider point that Labour’s disciplinary culture is really down to the leader. In response, a Labour spokesman dubbed him a ‘disgruntled former staffer’ who was ‘politically hostile’ to the leadership.

Meanwhile, the depressing fact that anti-semitism infects all parties is underscored once more today after a Twitter user spotted that a Tory candidate in Cambridgeshire has a truly appalling social media history,including one message that said he was ‘sweating like a Jew in an attic’. I’d guess that George Stoakley will surely be suspended at some point today. MP Lucy Fraser, who posed with him for a leaflet pic, won’t be amused either.

There was yet another Lords defeat for the Government on its EU Withdrawal Bill last night, as Lord Lisvane’s amendment curbing Henry VIII powers passed with a whopping 128 majority. Yet again, it was a cross-party combo that did the damage, with 13 Tory rebels and crossbenchers voting by six to one for the change. Today, the Commons has its own symbolic vote on staying in the EU customs union, though with Government whips sending an abstain message out it will be the speeches not the result that we should watch for.

The really Big Vote in the Lords comes on Monday, on an amendment giving Parliament a ‘meaningful vote’ on the PM’s Brexit deal with Brussels. This is known among peers as ‘Grieve plus, plus’, because it corrects some of the loose wording of Dominic Grieve’s amendment that passed in the Commons late last year. Crucially, it is drafted to avoid a ‘coalition of chaos’ whereby Tory Brexiteers joined Remainers to vote down May’s deal in the hope of crashing out of the EU with no deal at all.

For all the talk of an October date for such a vote (if somehow approved in the EU Withdrawal Bill, or tacked onto the forthcoming Withdrawal Agreement and Implementation Bill), many in Westminster expect it could come later in the year. Under one cunning plan, some ministers want to go as late as the first week of January, removing the practicality of forcing May back to the negotiating table. The danger with that is it cuts it very fine, given the rest of Europe has to ratify the plans.

When David Davis was asked directly about all this yesterday, he studiously left open the idea that MPs could indeed force the PM to renegotiate a different deal. A resolution to approve the deal could be amended, he said. The Sun however points out that DD also said: “I do not expect the solution to that to be extension of membership of the customs union, I would view that on my part as a failure.” If it’s a failure, would he quit? And if so, would the PM have to force an effective confidence vote if MPs tried to bind her to a customs union? That’s still an open question.  Bloomberg reports May had a private meeting with ‘clean-breakers’ on Tuesday and agreed not to budge from her red line on a customs union.

Watch elite extreme sports runner Paul Robinson run the fastest ever mile…at the North Pole. They call it the ‘marathon’ and I’m sure it felt like one.

The local elections are exactly a week today and many Tories fear they will suffer pretty serious losses, particularly in London. The party hasn’t exactly been helping itself of late. In Haringey activists blundered by cutting-and-pasting a Labour tweet that said their candidates are ‘passionate about Labour values’. In Ealing, one local Conservative praised Labour’s ‘slick and comprehensive offer’. In Sunderland, a candidate has been suspended for Tweets that referred to a “fat goth girl” as a “mutant”, while another said that Diane Abbott looked like a “filthy, bulbous pig”.

As it happens, Labour could be playing a poor expectations management game here. If they fail to take Barnet, let alone the very difficult Tory flagships of Wandsworth and Westminster, their other gains (turning some areas into Tory-free zones) could be overshadowed. The Tories are also quietly hoping to do better than many think outside London. Still, other Conservatives think a drubbing would be no bad thing. “Next week looks tough, very bad,” a minister confides to Iain Martin in his Times column, while accepting that May will probably stay for at least two more years. But Iain also has a telling remark from one regular visitor to No.10: “In all my years I have never seen anything like it, not even under Brown”. “It has the whiff of death about it,” says another source.

Amid the rash of other news of late, there’s a risk that Westminster’s bullying and sexual harassment scandal has been overlooked but the fallout hasn’t gone away. The Indy reports today that plans are being considered for a new early warning system to spot MPs who might be bullying or pestering staff.  Officials would monitor data on MPs’ offices and if any showed a high level of staff turnover or repeated complaints that reached no conclusion, an intervention would be made. As I’ve said before, on the bullying front, it’s female MPs (some of them senior indeed) and not just men, who have notorious reputations.

And yet, for staff hired directly by Parliament rather than MPs, so called ‘clerks’, there is real anger at this week’s decision by an independent inquiry to look at the ‘culture’ rather than individual cases. Dave Penman, who leads the First Division Association union of senior civil servants, has a must-read blog for HuffPost today on why that’s just not good enough. He says Parliament’s ‘Respect’ policy for complaints is woeful and says MPs’ sense that they are ‘untouchable’ is what unites expenses claims for duck houses with many turning a ‘blind eye’ to serious mistreatment of staff by their colleagues. “Closure comes with justice, not tea and sympathy,” Penman declares. 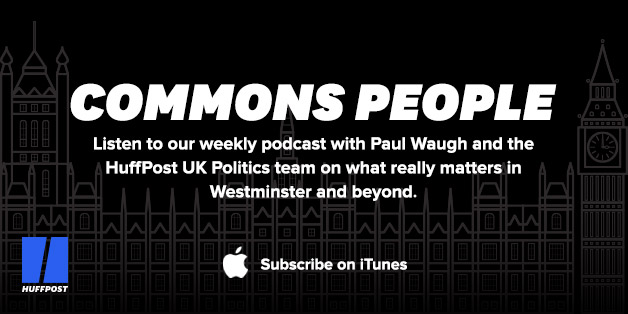