Richard Cabral, you might not know his name but you'll have definitely heard of his films and TV shows: Paranormal Activity: The Marked Ones, End of Watch, Southland.

In all the above, Cabral plays a Los Angeles-based gang member.

Because he was one.

Other interviews with Cabral discuss his good looks, tattoos (of which there are plenty!) and skim over his upbringing in one of the most dangerous cities on the planet - Los Angeles.

He did time for attempted murder, a charge he was on the run from for a while but accepted a plea

deal in the end.

The following interview asks Cabral the questions most small-time journos don't want to know about - what was he doing during the years where the rest of us were studying for our future?

Journalists are targeted more than politicians by gangs and the cartels, so when it comes to asking him about his lifestyle, he's surprisingly forthcoming and happy to talk about his life inside an LA gang.

Here is the response to those questions:

How old were you when you joined a gang and how were you initiated?

'There are so many ways to define joining a gang. Most would consider joining the day you get initiated. This could be by being 'jumped in', which is essentially being punched, kicked and having to fight back for a set amount of time. Sometimes initiations mean having to prove your commitment to the gang by committing a crime like assault, robbery or murder. This depends on what gang you join.

'For many, this is just a turning point. Long before the initiation, gang mentality has become instilled in your lifestyle. Just like the rest of the world, I became a product of my environment and this environment was gang culture. I was 13 when I crossed the line and I was jumped in by my future brothers.' 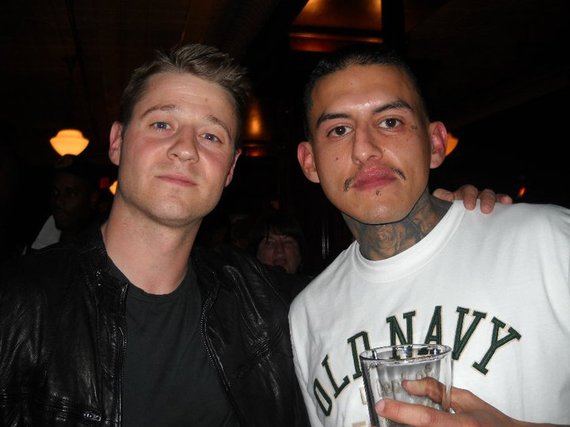 What sort of gang were you involved with?

'All gangs have similarities and mine was no different. We committed assaults, used and sold drugs, carried guns and shot rival gangs. My gang's main focus was territorial. A lot of gangs in Los Angeles concentrate on territory and selling drugs comes second. There was never a daily task like a normal job, it was just a part of my life. I think 98% of gang members in Los Angeles would agree that being a gang is just like being part of a community.

'When you're in a gang you go through life like any other individual. You have certain obligations but you are not forced to do anything. You're not forced to sell drugs, do drugs, murder but if you do then you're congratulated. Your only true obligation in a gang is to be committed and be there when your brothers need you.'

Most British students in the UK experiment with drugs around the ages of 18-25, how do you feel being brought up around it at a much younger age?

'I had no feelings about it as a kid because I knew no different. It was something you accepted and it's not until you're older and are given a chance to see things from a new perspective and you might ask yourself why this is happening.

'I feel at the moment that violence and drugs surrounds hundreds of kids every day so many of them think their life is no different to everyone else. When I was younger I probably thought to myself, "well at least I'm not going through this alone" so it just becomes something you accept.'

How did that lifestyle impact on your schooling?

'Schooling becomes secondary in that lifestyle. Belonging to something came first for me. Traditional schooling never resonated with me, there was nothing it could offer me to keep me interested or make me want to go there. All I wanted was to belong and gang culture allowed for that gap to be filled.'

What sort of education did you gain from being in a gang?

'I learned how to survive, a definite sense of community, brotherhood and friendship. By being part of gang culture, you learn to put your life on the line for another human. It's as serious as that.

'In a practical sense, I learned how to sell drugs, to take responsibility for money because I needed a certain amount of money to get more drugs to make more money.'

What sort of money were you earning at this point?

'As a gang member I didn't make any money because I was using meth, whatever I sold was enough to get me by for the next day or two.'

'I was in and out of jail. At 20 I was charged with attempted murder and the district attorney in Los Angeles was trying to give me a 35 to Life sentence.'

(And 'Life' in the USA doesn't mean you do 12 years and then get released, it means until the day you die)

How did being in prison influence your future life decisions?

'Prison was a great turning point in my life. Luckily, I only had to do 3 years. I saw this as an epiphany from God and if I did not take heed to this message I wouldn't be given a second chance. During prison, I hung out with men who had been inside for 15, 20 and even 25 years. That really shook me up because I knew how close I'd come to being in their shoes.

'I learned that all the gang bullshit amounted to nothing because all of us fighting for land in the street just ended up in the same piece of land - prison. Nothing is permanent and all people will face their ending, especially in the life of crime.'

When you left prison, how easy was it to leave the gang you'd been involved with?

'My friends from my neighbourhood were the only friends I knew and true friends seem to understand. Like I said, there was no one to force me and if they had then I'd have told them to 'fuck off'.

'I was blessed to see the true 'me' and not to turn to outside beliefs like I did when I was on the outside. I began to feel who I really was and what I really loved. I learned that life is precious and that no day should go unloved. This mentality really set in when I decided that I wouldn't go back to a gang lifestyle when I got out of prison.'

Looking back, how do you think being addicted to drugs and being gang related influenced the characters you play?

'Violence still resides inside me but now my life choices are different. People's demons are always there, you just learn how to maintain them. Being an actor now, I bring out the demons when need be.

'Artists of all kind pull out experiences from themselves and I am no different.'

Despite his mind-blowing upbringing on the streets of East Los Angeles, Cabral is grounded and has put all his efforts into raising a new family, starting a career and helping others in need of a life outside of organised crime.

Clayton Cardenas (pictured above) is one such ex-gang member who told us, 'The world needs to know about him [Cabral]. There is a lot more to him than meets the eye.'

Richard is currently working on a new film with Mel Gibson called Blood Father and is starring in the gritty television series American Crime. Both will be released in 2015.

As he's just moved into a new property and doesn't have wifi, Richard and I were unable to Skype for our interview and so all photos have been taken from his personal Facebook account with his permission.