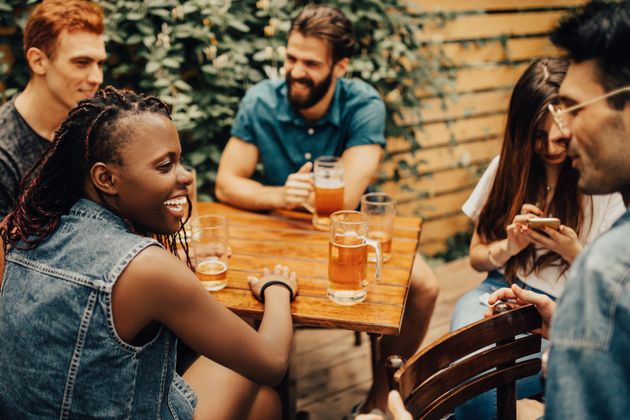 Small talk is nerve-wracking for even the most extroverted people. These days many of us are so glued to our phones that we’re out of practice when it comes to conversing in real life.

“Our reliance on technology really insulates and isolates us,” said human resources consultant S. Chris Edmonds. “We don’t talk with humans as often as people did 10 years ago. We may be rusty! We’re not sure where to start and don’t want to sound dumb.”

Don’t sweat the small talk, though. You’re perfectly capable of having smart, engaging conversations with people you’ve just met ― even with your polar opposite. Below, Edmonds and other small-talk experts share their best advice for upgrading your chatting skills and presenting your most witty, interesting self.

Keep in mind that the conversation will be over before you know it.

The one good thing about small talk if you hate it? By its very nature, it’s fleeting. Instead of treating the conversation as a prison sentence, relax and try to enjoy the experience of finding common ground with another human.

“It’s a short time frame. You’re not stuck with one person to speak with the whole reception or meal or whatever the social situation is,” Edmonds said. “You’re engaging for five minutes ― maybe 10, if the discussion goes swimmingly. Don’t fret.”

If the other person is more talkative than you, embrace it.

When we think of polar opposites in a social setting, we usually think about extroverts and introverts. Yes, they’re different, but there’s absolutely no reason why the two personality types can’t have a stellar session of small talk, said Melissa Wadsworth, the author of How to Make Small Talk: Conversation Starters, Exercises, and Scenarios.

“Extroverts have the gift of easily conversing and introverts offer the gift of easily listening,” she told HuffPost. “These polar-opposite gifts are actually highly complementary. You certainly won’t encounter the problem of people talking over one another.”

Ask questions. A lot of them.

A recent study suggested that the key to good small talk is asking the other person a lot of questions, so get inquisitive. Not only will you make the other person feel interesting; it’s also a neat trick to shift the focus off you.

“Ask about who inspires them, what they enjoy doing, when they knew they were good at something, why they like certain things, and how they approach specific challenges,” Wadsworth said.

“You don’t want to go into reporter mode,” Wadsworth said. “Be sure to reflect back your own feelings in response to what they share, so that a real connection can develop.”

Sure, you could default to the same played-out questions that humans have awkwardly asked since the beginning of time: “How are you?” “So do you come here often?” A better strategy, though, is to reframe the old standbys in ways that produce real, meaningful conversation. Small tweaks make a huge difference, said Debra Fine, the author ofThe Fine Art of Small Talk.

“Rather than ‘How are you?’ swap in ‘What is new in your life since the last time I saw you?’” she suggested. “Instead of asking someone, ‘How’s the family?’ say, ‘Bring me up to date on the family.’”

Stop thinking you are boring.

When you get stuck in your own head, you kill the conversation before it has a chance to start. You may not think you possess killer wit or the most fascinating job in the world, but you absolutely have a unique perspective ― and maybe even a hot take on something in the news or pop culture.

“You have stories and perspectives that only you can tell,” Wadsworth said. “Small talk gets a bad rap because people keep it so surface. Some of the best conversations happen because one person had the nerve to speak to something important or really interesting. Small talk at its best is courage and confidence building, one positive intention and one genuine word at a time.”

In short, give yourself permission to have your own perspective and take up space. Doing so will inspire the other person to dig a little deeper, too.

To keep the conversation flowing, use your hands.

While you don’t want to gesticulate wildly (please don’t look like Kramer from “Seinfeld” mid-conversation), getting a little animated and appearing engaged goes a long way. Your facial expression and body language should let the other person know you’re truly listening to them.

Those non-verbal cues will also reduce awkward lulls in conversation. A recent study from the Netherlands showed that people who used hand or head gestures received responses to their questions around 200 milliseconds faster than those who didn’t (a millisecond is 1/1000th of a second).

OK, that’s not a lot of time. But think of it this way: When you face-palm and shake your head after telling your new co-worker about your latest Tinder nightmare date, you’re giving them permission to laugh and move the conversation along.

Don’t be a conversational wet blanket. When someone asks you a question, give them something to chew on, not a bare syllable or two.

“The key is to be a good sport for others,” Fine said. “If someone asks you, ‘How was your summer?’ give them something to talk about with you. For instance, ‘My summer is great, I’m excited about my vegetable garden and to go cycling’ or ‘My summer is OK, I’ve been really busy with an overload of projects at work.’”

The common thread in all such answers? You give your conversation partner something to latch onto and carry the talk forward.

But don’t overwhelm them with details about that veggie garden and cycling schedule.

“You don’t want to offer much narrative in case they were not genuine in their interest,” Fine said.

Look on the bright side: This may be the start of a beautiful new friendship, work connection or romantic interest.

Hopefully, we’ve made a solid case that small talk isn’t the worst thing in the world. It may even help you connect with someone new with whom you want to have substantial non-small talk.

“Small talk is about tapping into possibilities,” Wadsworth said. “Approach the conversation excited about the friendship, the good laugh, the fascinating story, the job lead, the date, the joy or the sense-of-belonging potential inherent in this shared experience. It’s the first step to any meaningful relationship.”

When Is This Latest UK Heatwave Going To End?