A couple who shot to viral fame for their creative "bun in the oven" pregnancy announcement have shared the latest photos of their premature son.

Dana Griffin-Graves gave birth to Kaleb in October 2015, when she was just 23 weeks pregnant.

Both Griffin-Graves and her son were in critical conditions after he was born, but the latest photos show Kaleb has been a "little fighter".

Griffin-Graves, who was trying to conceive with her husband Arkell Graves for 17 years before falling pregnant, uploaded a photo of her son on the couple's Facebook page wearing a babygro with the words "I'm a little fighter".

Kaleb, who they call #BabyBuns on social media, is pictured with a dummy and has tubes coming from his nose.

"When you feel as if you're at the end of your rope, tie a knot, hold on and keep fighting," she wrote on Facebook when uploading the two new photos.

"Blessings to all the babies in the NICU and their families. Happy 20 weeks, 1 oz away from 6 lbs."

The mother has documented Kaleb's journey, which includes going in and out of surgery, since he was born on 20 October 2015.

The couple rose to internet fame in September 2015 when Griffin-Graves surprised her husband with the news she was five months pregnant by putting a bun in the oven.

Her husband's tearful reaction captured the hearts of many. The video has been viewed more than 10 million times on YouTube. 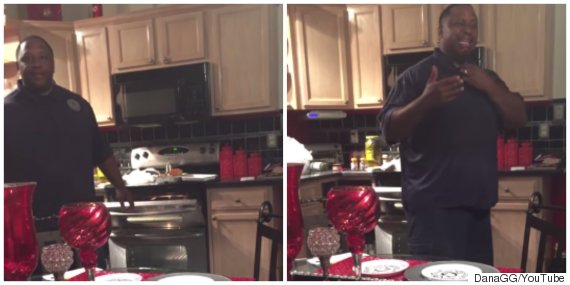 In October 2015, Arkell Graves announced his wife had given birth at 24 weeks and was in "critical care".

"Today, our baby will have to be delivered, at 24 weeks and one day," the new dad wrote on Facebook.

"As Dana is in critical care, her body has endured all it can take. Please keep us in your prayers today and always."

Soon after, the new mum broke her silence, saying she was in recovery but her son had only a 5% chance of survival.

The couple have continuously updated people through their Facebook page with news of Kaleb's milestones, including his two-week birthday and the first time he tried milk.

On 3 March 2016, the couple shared the news that Kaleb had successfully gone through heart surgery.

"We appreciate all of the many messages seeking updates and offering prayers for our miracle," they wrote.

"After having heart surgery on Friday, Kaleb was extubated on Sunday.

"He is progressing well. He is on a non-invasive ventilator. We pray that his recent procedure will assist him in being off a ventilator completely."

Celebrity Parents With The Most Children

Sign up and we'll email you a weekly dose of parenting stories, covering everything from pregnancy and birth, to babies and toddlers. We're in this together.
Successfully Subscribed!
Realness delivered to your inbox