Hello to all of you, how's it going?

I enjoy this time of year, I love the turn of the seasons. I'm coming to the end of a year that has been full for us guys, and also it really is a mad time to be alive in general I think. Do you ever wake up and think, we live in time of such change and progress and yet seem to be standing on the edge of the abyss? This economic stuff is really fascinating me at the moment. It's quite disturbing, isn't it? I mean there really is enough for everyone to get along, I hope the people with the power will start to listen before it's too late.

I am listening to this right now:

Music is always changing, I'm trying to trace it - although I'm still a vinyl junkie I am starting to lean more and more towards digitalisation. Maybe it's good to have a balance, but there is nothing like listening to a tack on vinyl through headphones.

Music has changed so much since we last put out a record. When we released our second album, Konk, people were still listening to CDs. And before that, when we released Inside In/Inside Out there were so many bands, you had a new one smashing it every month. I would love to campaign to bring back Top of the Pops, RIP Jimmy Savile, (he was a mad one, there was a great Louis Theroux documentary on him) those were great days, but they are the past.

We did the Jo Whiley Show recently and that seemed cool.

With our latest album, Junk of the Heart, we were thinking of fusing real traditional songwriting and modern sounds, not being at all traditional in the way we recorded it.

We've only just started down that line now, and our producer Tony Hoffer is a genius. I loved working with the more modern sounds and I loved making the album very much. I'm working on something at the moment with some very different production, I'll post it as soon as its ready, it's sounding massive. I've never done anything like it, it's dance music essentially.

Check out this song - Rob Swerdlow, our manager, showed me this a little while ago. I think its iconic. Lykki on the moon -

Her records were a big influence to me too - such inspired arrangements, the percussion is outstanding and such incredible depth in her vocal.

I've been getting into other things too. I started taking photographs around that time and put a few things forward to the guys. We ended up using a shot that I'd taken, we took it to Joel Lavack, a friend of Pete's (The Kook's bassist). He came up with some great canvases and Pete and me went down to his studio, which was in an abandoned Bank of Scotland building! Fucking brilliant... He came up with some amazing images. It really felt that it was the right artwork for what we were doing musically.

Anyway, here is the original photo: 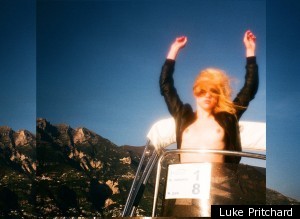 I got into jazz recently, something I always kinda hated. Stupidity on my part I guess, I always thought, "those fucking jazzers... I like rock and roll." But I started with some Miles Davis, Sketches of Spain and Kind of Blue, also Chet Baker... the undeniable stuff you know, and now I'm down with the jazzers... I figure I'll learn some jazz piano some time.

Also, rum - I cant get enough of it at the moment... the good stuff. I went to Cuba a while ago and thats all we drank. Havana Club. At the factory where they brew it they have an amazing band who we played with, a great band. That music is distilled into rum and they create golden nectar. They were playing some rhythms I'd never heard before, and they were doing it purely for the love of the music, nothing else.

[Editor's note: Below is a poem that Luke wrote exclusively for HuffPost UK]

At the Dinner Party

Enjoy life and enjoy the pebbles on the floor,

Get into the dancing as the walls become mirrors,

Do cut your hair, but never use scissors.

Never be somewhere you cant see,

And never listen to a fool who is not me,

Listen to yourself more than a lot,

But know when to be a ghost.

Please ignore, but be a part,

And never listen to the one who wants to hear you at the start,

Always be you as you always are,

And never deny a fellow arcadian.

Try to know when a friend is in need,

And know that a friend is all that you can be,

Know that i adore you and that i do often lust.,