Some of the students that made it work!

Wednesday 5 February, National Voter Registration Day. Politics and students. Not exactly a frequent sight to see those two words in the same sentence. However, during this day at Middlesex University first year students began their campaign for Bite the Ballot to encourage young people to register to vote.

Most people that were approached today asked: "Well, what will the government do for me? Does David Cameron even care?". Well if you're not a registered voter then let's talk realistically, the answers to both those questions is 'nothing' and 'no'. Why? Because not enough young people are registered to vote, not enough young people are voting. So, to go back to those questions, why should the government care about your thoughts if you don't even bother to register to prove that you want things changed? See my point?

In addition to talking to students about registering to vote, the first year students decided to set up their own version of a polling booth, but it wasn't your ordinary polling booth. Inside was a video camera in which anyone could sit in and speak about anything they felt passionate about. Whether that be welfare & benefits, drugs, environment, arts & culture, housing, education, universities and so on. Everyone has their own views on each of these subject areas, to ensure that you are heard you should register to vote. (And then vote when the time comes!)

Putting the final touches to the booth that was made and decorated by students.

The work doesn't stop, even whilst someone is inside talking.

The rest of the students took out their clipboards and forms in search for people who could be persuaded enough to register. And over the course of 6 hours, the students managed to get around 230 students to register, not bad at all! 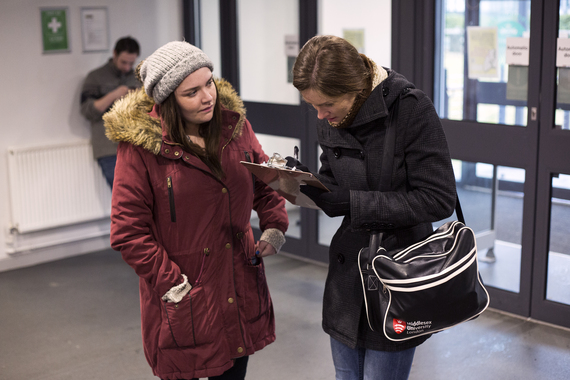 A very familiar scene throughout the day.

In terms of elections, the European elections are scheduled to be held in May of this year followed by local council elections that will also be held this year. The major one to watch out for though is the general election in 2015 and considering all the changes that have been made under the current government, don't you want to have the opportunity to have a say in the next?

So, what are you waiting for? If you haven't already, register to vote! http://bitetheballot.co.uk/nvrd/