President Obama has said Israel's prime minister Benjamin Netanyahu's comments about Arabs could threaten to "erode the meaning of democracy" in the country, in a revealing interview with The Huffington Post at the White House.

In an exclusive sit-down with White House correspondent Sam Stein, the US President called out Netanyahu for his recent comment that there would be no Palestinian state under his leadership.

Obama said Netanyahu had made it hard for people to "seriously believe" peace negotiations are possible.

As his re-election campaign looked shot last week, the Likud leader told a radio station that there would "indeed" be no Palestinian state under his watch, and posted an infamous Facebook tirade, called racist by many, where he accused left-wing parties of "bussing in Arab voters" and warned of Arab voters "heading to the polls in droves".

Obama said: "We continue to believe that a two-state solution is the only way for the long-term security of Israel if it wants to stay both a Jewish state and democratic. And I indicated to him that, given his statements prior to the election, it is going to be hard to find a path where people are seriously believing the negotiations are possible."

Obama had raised eyebrows after he waited nearly two days before congratulating Netanyahu by phone. Making clear his distaste for Netanyahu's description of Arab voters, Obama said the rhetoric was "contrary to what is the best of Israel’s traditions. That although Israel was founded based on the historic Jewish homeland and the need to have a Jewish homeland, Israeli democracy has been premised on everybody in the country being treated equally and fairly".

To lose those values, Obama said, would give "ammunition to folks who don’t believe in a Jewish state, but it also I think starts to erode the meaning of democracy in the country".

Netanyahu attempted to row back on his two-state solution comments in his first post-election interview with MSNBC, after his party took 30 seats in the Israeli parliament, the Knesset. "I want a sustainable, peaceful two-state solution, but for that, circumstances have to change,” Netanyahu told the broadcaster. “I was talking about what is achievable and what is not achievable. To make it achievable, then you have to have real negotiations with people who are committed to peace.”

On the table were Iran, Israel and getting enough sleep

But speaking to Huffington Post, Obama made it clear he was taking Netanyahu's pre-election comments seriously. "We take him at his word when he said that it wouldn’t happen during his prime ministership," Obama said. "And so, that’s why we’ve got to evaluate what other options are available to make sure that we don’t see a chaotic situation in the region.

"We’re going to make sure, regardless of disagreements we have on policy, that our military and intelligence cooperation to keep the Israeli people safe continues and that cooperation also helps the American people stay safe."

"But we are going to continue to insist that from our point of view, the status quo is unsustainable, and that while taking into complete account Israel’s security, we can’t just in perpetuity maintain the status quo, expand settlements, that’s not a recipe for stability in the region."

The President said he was optimistic that the Israeli elections would not have a "significant impact" on the USA's attempts to do a nuclear deal with Iran that would please both Congress and the American public, despite acknowledging "skepticism" in Israel that "Iran has made vile comments, anti-Semitic comments, comments about the destruction of Israel".

President Obama gestures as he speaks to Sam Stein

"It is precisely for that reason that even before I became President, I said Iran could not have a nuclear weapon," he added.

Speaking about the negotiations between his country and Iran, Obama said that President Hassan Rouhani's regime had "not yet made the kind of concessions that are I think going to be needed for a final deal to get done".

"But they have moved, and so there’s the possibility," he said, speaking optimistically about the resumption of talks when the two sides meet again next week, after the Nowruz holidays in Iran. "Our goal, though, is to get this done in a matter of weeks, not months."

HOW DOES THE PRESIDENT OF THE UNITED STATES KEEP HIMSELF GROUNDED? 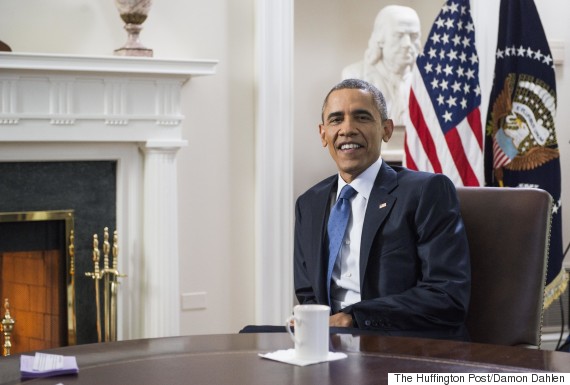 In your seventh year in office, what have you learned about pacing yourself and managing the stress of the job?

THE PRESIDENT: You know, the truth is that I'm lucky to, by inclination and temperament, be fairly steady --

THE PRESIDENT: Yes, exactly. I think that's probably what it is - good weather and beaches.

But I think the most important thing is to take the long view on things. We live in such a 24/7, Twitter-fed, constant news cycle, and everything is a crisis and --

THE PRESIDENT: Well, I'm not. But everything is a crisis. Everything is terrible. Everything is doom’s day. Everything is if it doesn’t get solved tomorrow your presidency is going off the rails. I mean, there must have been -- what -- 15, 20 things that over the last seven years folks have said, this is it, it's over.

We had the Gulf oil spill, worst environmental disaster in history. Everybody said, oh, he’s handling this terribly. A year later, nobody was talking about it, and in retrospect, it turns out that we handled that as well as any environmental crisis has been handled.

Ebola, remember that? Obviously it's still a serious problem and we've got to get down to zero, but that was probably one of the most effective international public health responses in history, and that was led by us. If we hadn’t acted it would still be raging and everybody else would be at risk.

And so, those experiences I think remind you that my job is to keep my eye on the ball and to stay focused on what can we get done every single day to advance the vision and the values that brought me here.

What can I do to make sure that middle-class families are feeling more secure; that more young people are able to access opportunity; that we are safe; that we are working with our international partners to try to create more order at a time when there’s a lot of chaos; how do we deal with terrorism in a way that's consistent with our values? As long as I stay focused on those North Stars, then I tend not to get too rattled.

I was wondering how many hours of sleep you're getting a night?

THE PRESIDENT: Probably not enough.

That's what I figured.

THE PRESIDENT: I will say that when people leave the administration and I see them six months later, they’ve got the post-administration glow. (Laughter.) They really look good. So I'm hoping the same happens to me.

There’s hope for you. Thank you, Mr. President.

Great to see you.

Latest Covid Rules: How Will Restrictions Change Next Week?

Sign up and we'll email you analysis of the day’s top politics stories every weekday evening from HuffPost UK.
Successfully Subscribed!
Realness delivered to your inbox

We Dream Of A Four-Day Week. Here's How To Make It Reality

Boris Johnson Will Stay On And Fight Any Leadership Challenge, No.10 Says