David Cameron promised a Conservative government would deliver a "good life" for voters today, as he attempted to inject a more positive vision into a general campaign that has been criticised for being too negative and narrow in focus.

Launching the Tory manifesto in Swindon, the prime minister revealed a raft of policies he said were designed to show that it was the Conservatives, not Labour, that was the party of "working people".

Cameron painted a picture of a "buccaneering" Britain which had a "brighter" future under his leadership. His remarks and recalibration of the campaign message harked back to his first speech as Tory leader, in pre-recession 2006, when he urged the party to let "let sunshine win the day".

Today's rhetoric was in marked contrast to the early days of the Conservative campaign, which the prime minister launched outside Downing Street with a targeted personal attack on Ed Miliband and repeated warnings about the "chaos" a Labour government would cause.

With the polls neck-and-neck, that approach has worried some Tory MPs, who fear the party's campaign chief Lynton Crosby has put too much focus on a uninspiring utilitarian economic message.

Former Conservative leadership candidate David Davis told The Huffington Post prior to today's launch that Cameorn needed to set out "a vision for Britain" to win over floating voters.

The summary of the Conservative manifesto, published today, lists six policy priorities, but carefully avoids mention of the public spending cuts that are due to be made in the next parliament by the party.

By contrast, Labour used its manifesto launch yesterday to do the exact opposite and promote itself as the party of fiscal responsibility.

Senior Labour figures have attacked the Tories for making "unfunded" spending commitments. Both George Osborne and Sajid Javid have struggled through interviews unable to explain where the money for a planned extra £8bn in NHS spending will come from.

The role reversal in messaging with 23-days to go until polling day comes as both the Conservatives and Labour attempt to neutralise perceived weaknesses of their campaigns. 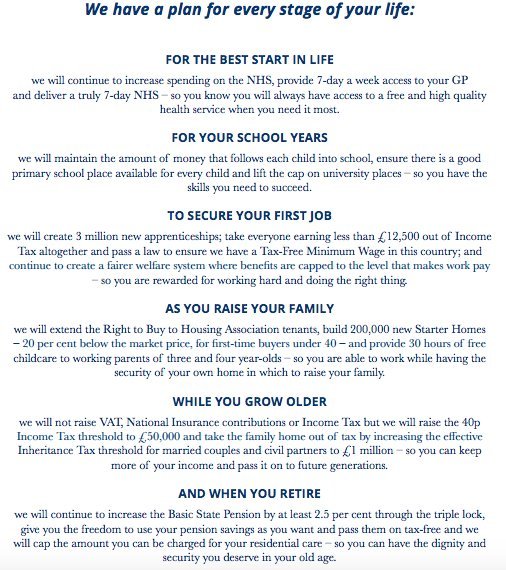