This Saturday in Exeter Cathedral sees the first 'Saying Goodbye' service of remembrance for babies lost at any stage of pregnancy, at birth or in early years. This is the first of seven cathedral services this year, with up to 22 services planned by the end of 2013 in the UK.

The Saying Goodbye services have been created by Zoe and Andy Clark-Coates, who have personally suffered the loss of five babies. They are now blessed with having two vibrant little girls, one aged three and the other just 12 months. 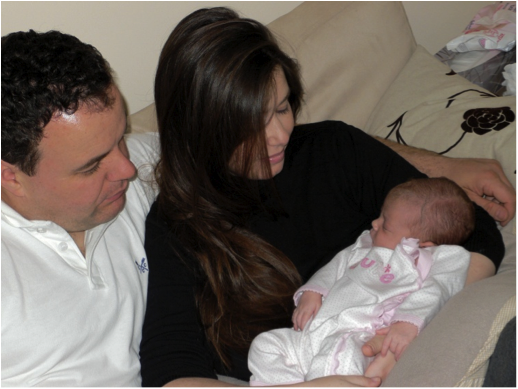 Grief is something that is poorly understood, tolerated or managed in British culture. As a woman who is childless-by-circumstance, I understand how it feels to grieve for an absence, the family that I would have had. For those women and couples who have lost a baby through miscarriage, early term loss or when still very young, their grief is also 'unrecognised' by others - sometimes even by themselves.

Indeed, Zoe says that with her first miscarriage, her "way of coping was to almost pretend it hadn't happened. I didn't want to be one of those statistics which state that up to 1 in 4 pregnancies end in miscarriage, and surely if I didn't acknowledge it, it didn't really happen!"

Denial is a classic response to loss, and perfectly natural. But the other stages of grief need to be acknowledged and worked through to in order for grief to complete its healing of our souls.

Grief, it seems, like love, needs the loving and understanding presence of other souls for it to reach its full expression. The Queen has said that "Grief is the price we pay for love," which is true, but I would also like to suggest that grief is the gift of love. Grief may break our hearts, but it does so in order to leave our hearts even bigger than they were before. Grief changes us - if we let it. The work of grief is to take a wound and turn it into a scar - something that will be with us forever, that will act as a reminder of what we have lost - but which we can live with. Grief is not about 'getting over' something, but about healing around it.

This is why I believe that the work of Saying Goodbye is so incredibly important. It's breaking the taboo of grief and loss by making visible the losses that so many women and couples have experienced, and are experiencing, right now. It's also doing so in a way that is dignified, ritualized and within the context of our culture. It's a celebration of love.

When asked by people "why cathedrals?" Saying Goodbye say "because our babies deserve to be honoured in wonderful, awe-inspiring places," and I agree. Grief doesn't deserve to be hidden, it's an aspect of love and just as love is celebrated in a public ceremony, so should loss be. And anyway, hiding grief doesn't work anyway, because grief is patient and kind and waits for us. It waits until the environment is right and the support is there and then it heals us. No matter how long ago the loss, grief keeps the loss 'present' until we are ready to allow it to pass through us, change us and move on.

As Saying Goodbye says on its website: "Grieving is essential when you have lost a baby, and sadly the world can often impose a limit to the depth or length a person should grieve, we are trying to change this, and also change the taboo nature of loss."

The cathedrals which Saying Goodbye have chosen are ones which are used for secular events as well as Christian services, and the services have been created for people of all faiths or none. The very public and participatory nature of the services also makes it possible for other family members and supportive friends to join those who are mourning: for brothers and sisters to mourn the loss of their siblings; for supportive friends to finally have something they can 'do' for their grieving friend; for grieving fathers who are so often seen as the 'support' to their partner, but whose own grief is rarely acknowledged, or allowed a space.

The first Saying Goodbye Service is this Saturday 15 September at Exeter Cathedral at 3pm. Each of the services will follow a similar format and will include music by the resident choirs, international singers and musicians, poetry and readings, multimedia presentations, personal messages, prayers, a message of hope and more. The Saying Goodbye services are structured in such a way that it is possible either to take an active part, or simply sit and listen and allow yourself to mourn in the peace and beauty of the moment.

The Saying Goodbye organisation is a beautiful tribute to the five babies that Zoe and Andy Clark-Coates have personally suffered the loss of. And it is an organisation that the public has immediately taken to its heart. It already has over 10,000 followers on Twitter, and is represented by Ambassadors that are well known in British public life such as Prof. Lord Robert Winston, Prof. Lesley Regan, Nigella Lawson, Julie Etchingham, Prof Cary Cooper OBE, Jo Elvin, Ruby Hammer MBE, Dr John Sentamu Archbishop of York, Gabby Logan and Jools Oliver, to name a few.

As Lord Winston says: "I hope that these services will be a turning point in the nation, and through this new organisation miscarriage will become more widely understood, and families will know that their pain and loss has been heard and recognized."

As well as the public ceremonies, Saying Goodbye also acts as a portal to support and counselling services for grieving parents and the Saying Goodbye website is becoming the first port of call recommended by doctors and health-care practitioners. In so many ways, Saying Goodbye has already had a phenomenal impact, and that's even before the first service of commemoration on Saturday has taken place. And not just in the UK - the response to Saying Goodbye has been so overwhelmingly positive that they are already planning to create services of remembrance in the USA and Canada very soon.

The pain of miscarriage and early term loss is something that is taboo to discuss,but Zoe Clark-Coates has written movingly of her own experience of six pretty harrowing pregnancies on the Saying Goodbye website. At one point, in hospital after losing a baby, she was asked to fill in a form by medical staff that included such questions as "would you like a post-mortem" and "would you like the remains back?" Questions which, as she wonders "can any mother ever be prepared to answer? In medical terms, those who die in utero within the first 24 weeks of life are termed as 'retained products of conception'... but to me and my husband, it was our child, not just a potential person but a person, and he deserved to be acknowledged as such."

Zoe and Andy Clark-Coates have come through all this with two delightful young girls: one aged 3 and the other just 12 months. To have turned their heartbreak into a way of sharing their love for their own lost children into a way that others can mourn their own, exactly the kind of gift that grief can give. As the Global Directors of their international events company CCEM they have thrown their considerable expertise behind the organisation of the commemorative services, and all bases have been covered. Having watched Zoe reach out to new followers, night after night, on Twitter over the last few months, I have been moved to see her love and compassion in action.

"We created the Saying Goodbye organisation as a legacy in honour of our lost babies. We hope the services will help thousands of other people who also feel a need to acknowledge their babies, and to recognise their wonderful lives, however short they were. To just stand in a room with hundreds of other people who have all been through a similar experience, knowing everyone is there to support one another, will be such a powerful moment, and we hope it will be life changing to many."

Saying Goodbye is their gift of love to others. Their gift of grief. I'm sure their two little girls will be very proud of their parents when they grow up.

No tickets are needed for any service, first come, first seated.

Saying Goodbye is delighted to be supported by the Association of Early Pregnancy Units, and is working in partnership with Tommy's, The Miscarriage Association and Bliss.

It's Time You Learned How To Clean Your Meat-Encrusted BBQ