'Suits' actor Rick Hoffman has set the record straight after several royal wedding viewers picked up on his less-than-impressed expression during the ceremony.

Rick was one of several members of the 'Suits' cast who showed up over the weekend to support former co-star Meghan Markle as she tied the knot to Prince Harry in Windsor.

However, when the camera panned to Rick during the wedding ceremony, it didn't exactly look like he was over the moon to be here. 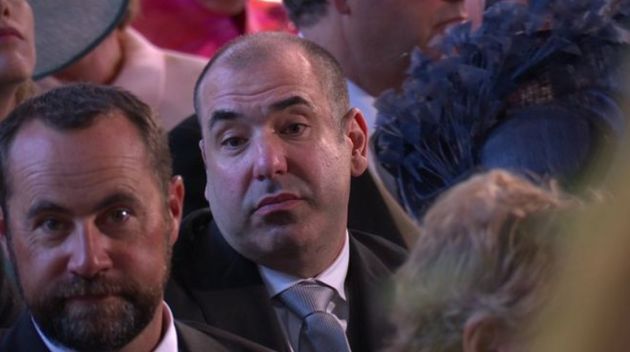 He has now addressed this, insisting that his issue wasn't with the wedding itself, but one mystery guest's need for a Smint.

Rick said on his Instagram page: "So, to answer any questions about the weird face that was made at the wedding.

"Imagine sitting next to people to your right and not knowing which person it was that has halitosis.

"Hence the face that's apparently now is all over the place. So... it's as simple as that, Charlie."

Also at the wedding were 'Suits' stars Gina Torres, Sarah Rafferty and Abigail Spencer, as well as Meghan's on-screen husband, Patrick J Adams, who posted a thoughtful message for her on the night before the wedding.

Rick's wasn't the only face viewers had an eye on during the wedding, though, with many pointing out that Victoria Beckham was looking her usual chipper self.

Female Orgasms Come In 3 Types, Apparently. Which Have You Had?

Liz Truss Asked Me How To Get Into Vogue Magazine, Says Nicola Sturgeon

Stillbirths Increased Last Year. Why Is Nobody Talking About It?